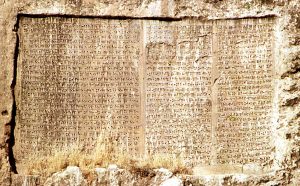 Inscription of Xerxes, Van, Turkey: It is a trilingual inscription, written in Old Persian, Babylonian and Elamite (from left to right). / Photo by John Hill, Wikimedia Commons

As an heir , Xerxes was trained to be emperor.

Xerxes was the oldest son of Darius I, and the offspring of the king’s first wife, Atossa, daughter of Cyrus II. Xerxes is familiar to students of the Bible since he appears in two books: in the book of Esther he is called by his Hebrew name Ahasuerus; and in the book of Ezra (4:6) he is mentioned in relation to an accusation lodged against the Jews in his reign. We have access to more than twenty Old Persian inscriptions written during his reign, but they do not add much to our knowledge of the man and his rule. As a result, our most important source is the Histories written by Herodotus of Halicarnassus (c. 480– c. 429 BCE), a Greek historian who described the expansion of the Persian Empire from Cyrus to Xerxes.

Xerxes and the Rebellions after His Accession 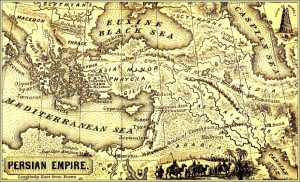 As an heir, Xerxes was trained to be emperor. Although he was not an active soldier as his
father had been before him, Xerxes was schooled in statecraft through his position as viceroy of Babylon. Soon after his accession he had to deal with rebellion, first in 485 BCE in Egypt, then in 484 BCE, and then again in 484–482 BCE, in Babylon. The last of these rebellions forced Xerxes’ hand. The great temple of Marduk, the main god in Babylon, was pulled down; a huge gold statue of Marduk was taken away and melted down for bullion; and the satrapy of Babylon lost its independent status, being merged with Assyria, its erstwhile enemy.

Having dealt with rebellions relatively near at hand, Xerxes looked to the West, and in the spring of 481 BCE he left Persia with what probably was the greatest ancient army ever amassed, to avenge his father’s defeat by the Greeks at the Battle of Marathon in 490 BCE His army wintered in Asia Minor and continued their journey in the spring of 480 BCE, forcing a crossing to Europe in high summer. With the defeat of the Spartan king Leonidas at Thermopylae in August of that year, Xerxes moved on to Athens. He arrived in Attica, the surrounding area of Athens, probably in early September. If Xerxes had patiently blockaded Athens, he would most likely have won, but tempted by the chance of a glorious victory in battle, he led his ships into a trap, the Battle of Salamis, that had been prepared by the Athenian general and ruler Themistocles. The Persians retreated, and Xerxes took a ship for Asia Minor, leaving his general and cousin Mardonius in charge. Two land battles were fought in the summer of 479 BCE at Plataea and Mycale, both of which ended in Greek victories.

Defeat and Decline of the Persian Empire 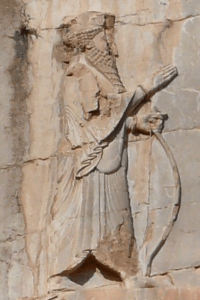 Xerxes returned to Persia discouraged by his failure against the Greeks, and his focus shifted to the building of his father Darius’s palace at Susa and the finishing of the construction of Persepolis. The early years of his life, which had seemed to bear so much promise, now saw the full weakness of his character expressed in a fierce temper and in lack of self-control in his relations with women. The resulting palace intrigues, accusations, and murders fostered an atmosphere of decadence in the Persepolis court and weakened Xerxes’ ability to rule effectively. The Greeks no doubt saw this, and in 466 BCE Cimon led a Greek force to Asia Minor from where he gradually increased his strength. Xerxes was roused from his lethargy and sent out an expedition to deal with the threat, but the Greeks were too strong, and the Persians abandoned their ships at Eurymedon. The land battle that followed ended with the Greeks taking the Persian camp. Eurymedon proved decisive, and the Persian Empire lost Europe. The loss of Europe and the slow loss of Asia Minor marked the beginning of a steady, if unhurried, decline in the empire to its eventual defeat at the hands of Alexander the Great in the next century.

In 465 BCE Xerxes was assassinated in his bedchamber by several of his court favorites. He was buried in a rock-cut tomb excavated in a cliff to the east of his father’s tomb. Xerxes’ oldest son Darius was next in line for succession, but a younger son, Artaxerxes I, had Darius slain and took the throne for himself. There was a second emperor of the same name, Xerxes II, Artaxerxes’ son, who ruled for just 45 days from the end of BCE However, his claim to the throne was tentative and was initially only certain in Susa. One of his half brothers murdered him while he was drunk in bed following a party.

Originally published by About History under a Creative Commons Attribution-ShareAlike 3.0 Unported license.