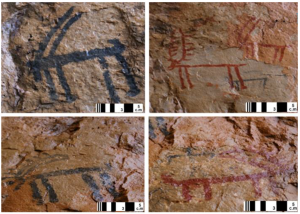 Howz-Māhy is a region located in the center of Iran, where a considerable number of petroglyphs can be found. 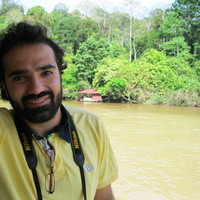 Howz-Māhy is a region located in the center of Iran, where a considerable number of petroglyphs can be found in two sites, at Ghārā-Tepe I and II. Ghārā-Tepe I is the largest site and includes a variety of depictions, especially geometric markings. In addition, various depictions can be found throughout the region situated on isolated cliffs and stones on the edge of an ancient pool. The most common image is of ibexes. There are also several other kinds of representations that show animals, humans, geometric markings, and so on, which can be found on panels. Despite difficulties for dating the petroglyphs of Iran, microerosion analysis should be applicable for dating the engravings of Howz-Māhy, especially in Ghārā-Tepe I.

Although the first attempts to explore the rock art of Iran date back about forty years [1], the archaeology of rock art is now making good progress in achieving a better understanding of Iranian engravings. Fortunately, studies by Iranian researches have progressed over recent years to the extent that a good overview of Iranian rock art has now been formulated. The books published on the rock art of Iran have been limited to Museums in the Wind, which covers rock art in Teymareh [2], and The rock carvings art in Arasbaran (Iran) [3]. In addition, Introduction to Sangestoon (in Qom province) provides a significant contribution to the rock art of central Iran [4]. The study of cupules in the rock art of Kurdistan by Lahafian [5] and the petroglyphs of Bard-E Pazani in southwest Iran [6] should also be included, as they constitute the most recent publications in this field. In addition, the engravings of Ostad Mirza in western Alborz [7] and The petroglyphs of Cheshmeh Malek and Dareh Divin in Hamadan [8] provide further significant publications with regard to the archaeology of the rock art of Iran.

Unfortunately, no effort has been made to date the petroglyphs of Iran using new scientific methods. Most of the previous dating methods have been made based on archaeological evidence or art styles. Farhady has dated the petroglyphs of Teymareh to prehistory [2], which is not reliable. The rock art of Songun in Arasbaran is considered to be from the first millennium B.C. on the basis of art styles and archaeological evidence [3]. However, 2000 B.C. is regarded as the maximum date that has been established through archaeological evidence in the region for the engravings of Ostad Mirza [7]. Rashidi Nejad also has compared the petroglyphs of Cheshmeh Malek and Dareh Divin with the motifs of pottery from Sialk II.2 (second half of VI millennium B.C.) and Sialk III.3 (IV–III millennium B.C.) [8].

Location and Characteristics of the Area

Howz-Māhy village is located to the south of Abrow town, in the environs of the city of Mobarakeh, within the southwest province of Esfahan, towards the center of Iran (Figure 1). It is situated in the semi-arid area of Esfahan and the semi-wet region of the Charmahal-Bakhtyari provinces. The level of precipitation from west to east is variable, with the highest level reaching 140 millimeters per year. Due to the lack of rain, plant cover in the sub-mountain area remains sparse. However, this area is classified as a dry region. The plant cover can be found mainly among the farming regions, gardens and steppes. The area lacks forests, and in the steppe regions, bush growth is prevalent [9]. 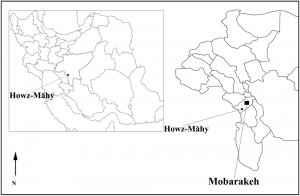 The name Howz-Māhy derives from an ancient pool located outside the village (Figure 2). In fact, the phrase Howz-Māhy derives from two words, namely, fish and pool, which means “the Fish pool”. Abrow, another town to the south of Howz-Māhy (Figure 2), means flowing water or waterway [10] and illustrates the significance of water within the context of a dry climate. The pool has a religious significance for the local people, since an ancient holy shrine, attributed to the prophet, Ozayz or Jeremiah, is located next to it. Other stories from the same region based on similar beliefs also refer to two natural phenomena. The first story refers to a rock-shelter, which the villagers believe to have been a place of gathering of a number of prophets, and the second belief concerns a blood-red soil hill, where the locals attribute the color to the story of the prophet Yahya’s (John) martyrdom in the same location. However, no ethnographic documents are identified in the region pertaining to the petroglyphs. 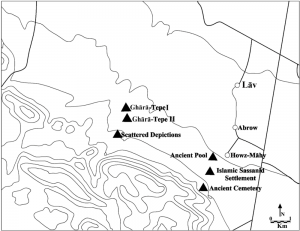 Furthermore, two other ancient sites, including a cemetery and a settlement (probably Islamic-Sassanid), have been identified in the region (Figure 2). The Paleolithic surveys and excavations of the Ghaleh-Bozy region [11,12] and its corresponding engravings [13] can be considered as the most important archaeological studies carried out in the area.

The Rock Art of Howz-Māhy

Ghārā-Tepe I, one of the largest and most important sites, is located on a metamorphosed dolomite stone outcrop about six kilometers west of Howz-Māhy (Figure 2). This stone hill is known as GhārāTepe, which in the local dialect means “the murky hill”, because from afar, the massive stone appears dark and murky. The site consists of more than twenty panels with a variety of carvings, including animals, humans, as well as geometric shapes. A number of ambiguous animal-like figures can also be seen at this site. The majority of the petroglyphs represent ibexes. From the prehistoric to the historical period, the depiction of ibexes in the ancient art of Iran can be found on many artifacts, involving a variety of meanings, of which the most common concerns prowess, which is seen as a symbol of masculinity, power, abundance, fertility and long life [14]. It seems, however, that some of the engravings have been added to the site by local inhabitants over recent years. When considered as a whole, nine of the engravings stand out from the rest due to certain characteristics of the motifs. The first scene comes from the southern zone of the site, where the majority of the more significant engravings are to be found. The first panel contains two animal-like shapes, including an ibex and an indistinguishable zoomorph (Figure 3). 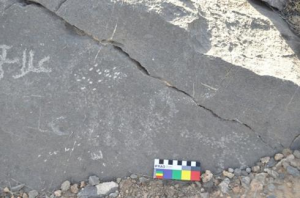 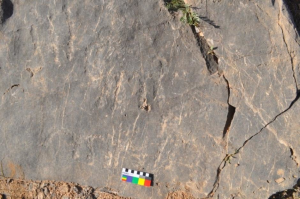 Most of the ibexes depicted at this site seem to be male, as they are depicted with an upwards tail, which, in ibexes, is a masculine behavioral gesture of the mating season when copulation with females takes place [15]. The next panel, number two (Figure 4), consists of a geometric image, ibexes and an unknown animal. The patination and style of the geometric motif is similar to that employed in the adjacent ibex and, therefore, may be relevant to it conceptually. This geometric marking has also been found in the rock art of the Barzgale region [16] in the west of Esfahan province. Interestingly, in Barzgale the depiction is also accompanied by an ibex, which reinforces the possibility of a conceptual relation between the two motifs (Figure 7). This geometric form also occurs on other panels, such as panels three and four (Figure 5 and 6), as well as panel eight. Panel five and six also include geometric markings (Figure 8 and 9). 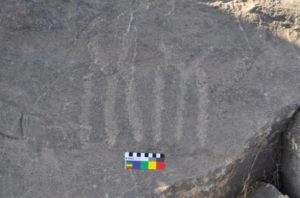 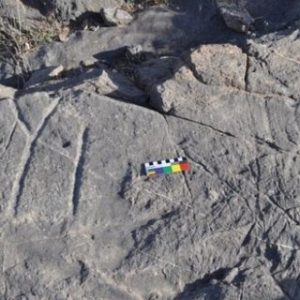 Panel 7 depicts a hunting theme, including an ibex in the middle of a scene situated between two human-like shapes, where one seems to be a hunter (Figure 10). Panel eight shows a scene consisting of a dog, an ibex, a wild creature that looks like a hyena (which, even nowadays, can be found in this area), a human shape and geometric markings. 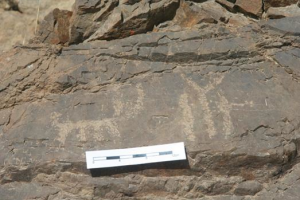 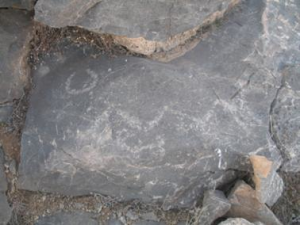 The last scene includes many different depictions, especially ibexes. The most important phenomenon of this panel is a cupule-like feature (Figure 11) that, due to patination, seems to be more ancient than the other depictions. Due to the evidence from the percussion activity, metal tools were probably used to create this feature. The ibexes, deer and an ambiguous shape (which resembles a scorpion) constitute the other engravings. Interestingly, there is much graffiti on this panel, which includes dates, indicating that it is no older than three decades. This graffiti may be useful for estimating the dates of petroglyphs through microerosion analysis, which, despite some difficulties, such as required calibration points, etc., is more reliable than most other dating methods [18]. 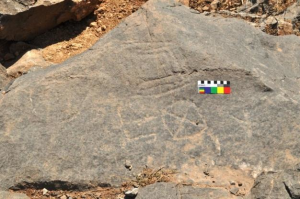 It is interesting to note that in this area, there are many sheepfolds made of rubble of which some are still in use today. Two of these, however, seem to be more ancient and are no longer in use, which are located in the southern and northern sides of the site. It is therefore possible that some of the petroglyphs were engraved by shepherds in recent centuries. While the science of petroglyph dating is still at the development stage and no measurements can be offered for these sites, careful preliminary examination of patination suggests a possible three-fold sequence for the depictions at Ghara-Tepe I. With regard to patination, the depictions at Ghārā-Tepe I can be divided into three different groups. The first group, which seems to be more ancient, can be found on several panels, including numbers 1 and 2, and extending to the geometric marks, which can be found on panels 3, 4, 5 and 6. The style is also different on these panels from the other depictions (see, for example, the depiction of goats in panels 1 and 2). The second group consisting of hunting scenes, etc., may relate to recent Islamic centuries. The third group of depictions seems to be much more recent 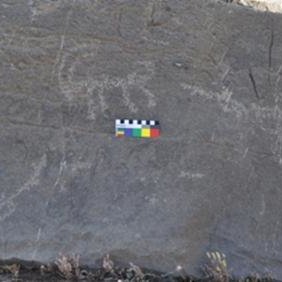 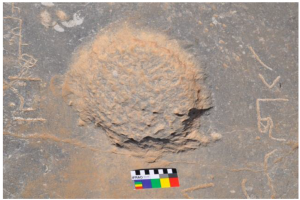 Ghārā-Tepe II consists of a stone outcrop made of metamorphosed dolomite located 300 meters to the south-east of Ghārā-Tepe I (Figure 2). Most of the depictions are similar to those of the previous site and also contain ibexes and another motif that, due to the high impact of weathering, is not clearly distinguishable. This engraving is situated at the side of a pit.

There are also some engraved lines associated with the pit, presumably in order to direct the water into the pit itself, but it seems that several of these lines may have been added to the engravings more recently.

The pool is located in the southwest of Howz-Māhy. As mentioned, although some depictions can be seen on the edge of the pool, they have been vandalized, due to repairs to the pool. The engravings consist of a geometric form, a sword and an ibex. As the stones were laid on the edge of the pool over the past few centuries, presumably the antiquity of the figures also dates back to more recent centuries. In addition, a geometric mark, which is rhombic in shape, can be found on a small overhang that forms the edge of a well located to the side of the pool. This well is one of the sources that supplies water to the pool and flows even in the dry season. In addition, there are two ibexes engraved on the isolated cliffs, located on a projection of the southeast mountains (Figure 2). Finally, one cupule can be seen on a cliff situated in an ancient cemetery in the southeastern hill region (Figure 2). The cemetery is close to a spring, which supplies water required for agricultural purposes.

Despite recent efforts to identify and document the rock art of Iran, several difficulties remain relating to dating, interpretation and the lack of an organized research program, which are fundamental to resolving the problems associated with Iranian rock art studies. As with several of the other rock art regions of Iran, dating constitutes the most important problem regarding Howz-Māhy rock art. The oldest archaeological evidence relates to the pottery of the adjacent settlement, which cannot be older than the Sassanid period (about 224–651 AD). The prehistoric stone tools, probably Epipaleolithic, have also been identified in the neighboring valleys. According to a preliminary survey, petroglyphs also exist in adjacent valleys. More surveys in Howz-Māhy and neighboring valleys can help identify the local iconography, which may also assist in providing a much needed chronology. However, as mentioned above, using microerosion analysis may be appropriate for dating the Howz-Māhy petroglyphs, especially in Ghārā-Tepe I, as some of the panels in this site can safely be dated to recent centuries.