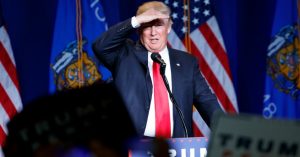 “I want to jumpstart America and it can be done,” Trump said, “and it won’t even be that hard.” (Photo: Evan Vucci/AP)

“It was self-contradictory word salad,” one critic said after Donald Trump’s economic policy speech in Detroit

Republican presidential nominee Donald Trump introduced his most detailed policy plan yet on Monday at the Detroit Economic Club, in a speech that was ostensibly targeted toward the working class but mostly outlined benefits for the wealthy.

The speech was also widely panned for lacking substance: New York Magazine editor Annie Lowrey commented on CNN that “it was self-contradictory word salad,” adding that “there was just not much detail here.”

Presumably channeling the advice of an economics policy team comprised of wealthy white men over age 50—five out of 13 are named “Steve”—Trump announced a hodgepodge of economic reforms that he promised would enrich the working class and “make America grow again.”

“I want to jumpstart America and it can be done,” Trump said, “and it won’t even be that hard.”

The policies proposed would benefit America’s wealthiest. The real estate mogul denounced “radical regulations,” promised to slash taxes for corporations and the top tax brackets, and vowed to dismantle the estate tax.

Trump also “seeks to reverse much of the Obama administration’s climate-change and energy agenda by defending the coal industry, rescinding environmental rules, and asking TransCanada to renew its Keystone pipeline permit application if he’s elected,” the Financial Post observes.

In addition, Trump said he would “rewrite” trade deals such as the North American Free Trade Agreement (NAFTA) and the Trans-Pacific Partnership (TPP), as Reuters reports.

“Trade has big benefits, and I am in favor of trade,” Trump said, as the New York Times notes. “Isolation is not an option, only great and well-crafted trade deals are.”

The Republican nominee’s speech was interrupted multiple times by protesters, most notably from the progressive group The Michigan People’s Campaign.

“You want to close Michigan plants and outsource our jobs!” shouted Jacquie Maxwell, a Grosse Pointe Woods auto worker, at one point, according to the organization. “How are we supposed to raise our families without good jobs? Is that what you call winning?”

“In an August 2015 interview in the Detroit News, [Trump] proposed his surprising plan to help the auto industry: close plants in Michigan and Ohio, and move plants to low-wage states. This slash-and-burn approach would cause whole communities who depend on auto jobs to collapse,” the group argued.

Reuters delved into the details of the proposals put forth during Monday’s speech:

Trump on Monday proposed cutting the number of federal income tax brackets from seven to three and reducing the top rate to 33 percent from 39.6 percent. He had previously said he would drop that rate to 25 percent, an idea many tax experts said would dramatically reduce government income and balloon deficits.

He called for a new deduction for childcare costs. There is now a tax credit for child and dependent care, which is determined based on income and capped at expenses of $3,000 for one individual or $6,000 for two.

Trump also repeated his plan for a 15 percent corporate tax rate. The current corporate rate is 35 percent, and Republicans have long sought to reduce it.

Trump didn’t give any details about how he’d accomplish any of these goals, and instead promised to “roll out plans” for all of his proposals “in the coming days.”

The Manhattan-based developer also spent much of his speech condemning his opponent, Hillary Clinton, linking her policies to those of President Barack Obama: “The city of Detroit is the living, breathing example of my opponent’s failed economic agenda,” Trump said. “She supports the high taxes and radical regulation that forced jobs out of your community.”

“If you were a foreign power looking to weaken America, you couldn’t do better than Hillary Clinton’s economic agenda,” the billionaire added.

Clinton will be in Detroit on Thursday to deliver her own speech on economic policy, the Times reports.