What did it mean for a woman to be diagnosed with hysteria? 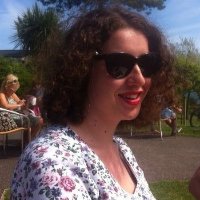 A 1916 casebook from St Luke’s Hospital (then to be found on Old Street, image above) reveals startling changes in our understanding of mental illness over the last century. In one record of a female patient from 1913 the supposed cause of her ‘attack’ is recorded as “acute hysteria”. The hysteric is a 33 year old woman whose symptoms include “exposing herself indecently” and “masturbates frequently”.

From the ancient Greek ‘hustera’ meaning womb, hysteria was thought to be a primarily female ailment, and symptoms labelled as hysterical were often exaggerated stereotypical feminine traits such as fits of passionate emotion. Conversely, women who did not fit stereotypical conventions of femininity and failed to fulfil their roles as mothers and wives were also liable to be labelled as hysterics. For an Edwardian lady to express her sexuality in any capacity beyond her marital duty was a dangerous decision. 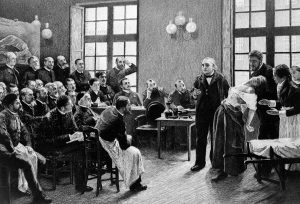 Jean-Martin Charcot demonstrating hysteria in a hypnotised patient at the Salpêtrière Hospital. Etching by A. Lurat, 1888, after P.A.A. Brouillet, 1887. Wellcome Library reference: 545647i.

In the late 19th century an American neurologist named Silas Weir Mitchell invented a treatment for such wayward women, which he named the rest cure. Ostensibly the premise was that the afflicted woman would lie alone in bed for quite some time, deprived of any intellectual stimulation in an effort to divert the blood flow away from the brain and restore it to the reproductive organs, thus correcting the supposed uterine disturbance, which was the cause of the hysteria.

One of his patients, Charlotte Perkins Gilman, wrote a parody of the deleterious effects of the rest cure in her novella ‘The Yellow Wallpaper‘, in which a subject of the rest cure is ironically driven to madness by her psychiatric treatment. Virginia Woolf was also prescribed the rest cure for her depression, but decried it in ‘Mrs Dalloway’ as nothing more than an elaborate way to gain weight. Scholars, such as Elaine Showalter, have since described the rest cure and the diagnosis of hysteria as an abuse of power used to subjugate women and relegate them to their assigned gender role. 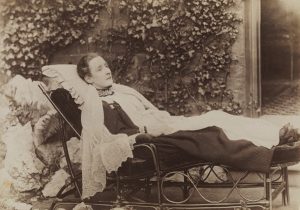 Certainly the records of male patients from these same asylums list supposed causes of mental illness that are much more extrinsic and physical, and less attributable to the innate character of the patient. Recorded causes for male mental illness in St Luke’s have included “son’s death“, “business losses”, “air raid shock” and “hard study”. Although it was not unheard of, men seem to have largely escaped the diagnosis of hysteria.

But to what extent was this due to the confinement of women to their proscribed roles, and what part is born of genuine biological differences? Modern psychiatry accepts that many psychiatric conditions have a gender imbalance, such as the higher prevalence of ADHD in males. Perhaps the more pertinent issue is the tendency of psychiatry to label those outside our expected societal norms as mentally ill.

The boundary between mental illness and ‘normality’ is blurred and changeable. As social norms alter over time the definitions of mental disorders alters with them. There is no clear division as to where pathological behaviour begins, and thought must be given to the merits and disadvantages of giving somebody a psychiatric diagnosis. How will diagnoses of mental illness change in the century to come?