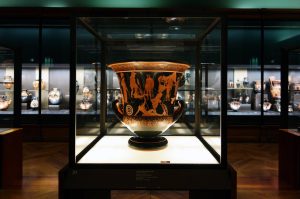 Pottery is virtually indestructible. Though it may break into smaller pieces (called sherds), these would have to be manually ground into dust in order to be removed from the archaeological record. As such, there is an abundance of material for study, and this is exceptionally useful for modern scholars. In addition to being an excellent tool for dating, pottery enables researchers to locate ancient sites, reconstruct the nature of a site, and point to evidence of trade between groups of people. Moreover, individual pots and their painted decoration can be studied in detail to answer questions about religion, daily life, and society. 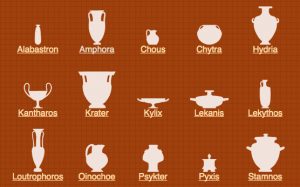 Made of terracotta (fired clay), ancient Greek pots and cups, or “vases” as they are normally called, were fashioned into a variety of shapes and sizes (see above), and very often a vessel’s form correlates with its intended function. For example, the krater was used to mix water and wine during a Greek symposion (an all-male drinking party). It allows an individual to pour liquids into its wide opening, stir the contents in its deep bowl, and easily access the mixture with a separate ladle or small jug. Or, the vase known as a hydria was used for collecting, carrying, and pouring water. It features a bulbous body, a pinched spout, and three handles (two at the sides for holding and one stretched along the back for tilting and pouring). 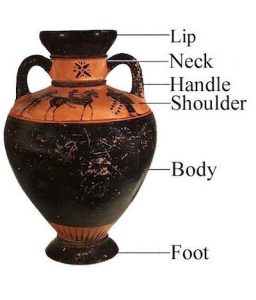 In order to discuss the different zones of vessels, specialists have adopted terms that relate to the parts of the body. The opening of the pot is called the mouth; the stem is referred to as the neck; the slope from the neck to the body is called the shoulder; and the base is known as the foot).

On the exterior, Greek vases exhibit painted compositions that often reflect the style of a certain period. For example, the vessels created during the Geometric Period (c. 900-700 B.C.E.) feature geometric patterns, as seen on the famous Dipylon amphora (below), while those decorated in the Orientalizing Period (c. 700-600 B.C.E.) display animal processions and Near Eastern motifs, as is visible on this early Corinthian amphora  (The British Museum). 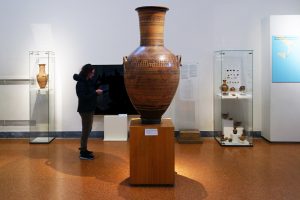 Later, during the Archaic and Classical Periods (c. 600-323 B.C.E.), vase-paintings primarily display human and mythological activities. These figural scenes can vary widely, from daily life events (e.g., fetching water at the fountain house) to heroic deeds and Homeric tales (e.g., Theseus and the bull, Odysseus and the Sirens), from the world of the gods (e.g., Zeus abducting Ganymede) to theatrical performances and athletic competitions (for example, the Oresteia, chariot racing). While it is important to stress that such painted scenes should not be thought of as photographs that document reality, they can still aid in reconstructing the lives and beliefs of the ancient Greeks.

To produce the characteristic red and black colors found on vases, Greek craftsmen used liquid clay as paint (termed “slip”) and perfected a complicated three-stage firing process. Not only did the pots have to be stacked in the kiln in a specific manner, but the conditions inside had to be precise. First, the temperature was stoked to about 800° centigrade and vents allowed for an oxidizing environment. At this point, the entire vase turned red in color. Next, by sealing the vents and increasing temperature to around 900-950° centigrade, everything turned black and the areas painted with the slip vitrified (transformed into a glassy substance). Finally, in the last stage, the vents were reopened and oxidizing conditions returned inside the kiln. At this point, the unpainted zones of the vessel became red again while the vitrified slip (the painted areas) retained a glossy black hue. Through the introduction and removal of oxygen in the kiln and, simultaneously, the increase and decrease in temperature, the slip transformed into a glossy black color.

Briefly, ancient Greek vases display several painting techniques, and these are often period specific. During the Geometric and Orientalizing periods (900-600 B.C.E.), painters employed compasses to trace perfect circles and used silhouette and outline methods to delineate shapes and figures (below). 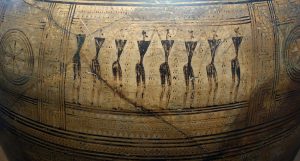 Around 625-600 B.C.E., Athens adopted the black-figure technique (i.e., dark-colored figures on a light background with incised detail). Originating in Corinth almost a century earlier, black-figure uses the silhouette manner in conjunction with added color and incision. Incision involves the removal of slip with a sharp instrument, and perhaps its most masterful application can be found on an amphora by Exekias (below). Often described as Achilles and Ajax playing a game, the seated warriors lean towards the center of the scene and are clothed in garments that feature intricate incised patterning. In addition to displaying more realistically defined figures, black-figure painters took care to differentiate gender with color: women were painted with added white, men remained black. 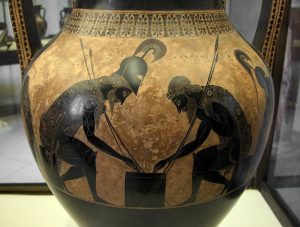 The red-figure technique was invented in Athens around 525-520 BCE and is the inverse of black-figure (below). Here light-colored figures are set against a dark background. Using added color and a brush to paint in details, red-figure painters watered down or thickened the slip in order to create different effects.

Watered down slip or “dilute glaze” has the appearance of a wash and was used for hair, fur, and anatomy, as exemplified by the sketchy coat of the hare and the youth’s musculature on the interior of this cup by Gorgos (below). When thickened, the slip was used to form so-called “relief lines” or lines raised prominently from the surface, and these were often employed to outline forms. Surprisingly similar to red-figure is the white-ground technique. 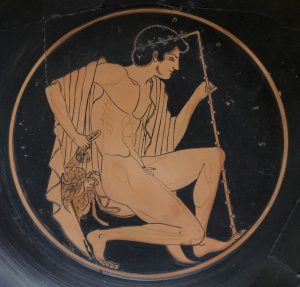 Though visually quite different with its polychrome figures on a white-washed background, white-ground requires the craftsman to paint in the details of forms just like red-figure, rather than incise them (see the Kylix below). 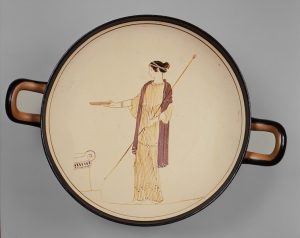 Alongside figures and objects, one can sometimes find inscriptions. These identify mythological figures, beautiful men or women contemporaneous with the painter (“kalos” / “kale” inscriptions), and even the painter or potter himself (“egrapsen” / “epoiesen”). Inscriptions, however, are not always helpful. Mimicking the appearance of meaningful text, “nonsense inscriptions” deceive the illiterate viewer by arranging the Greek letters in an incoherent fashion.

The overall attractive quality of Greek vases, their relatively small size, and—at one point in time—their easily obtainable nature, led them to be highly coveted collector’s items during the eighteenth and nineteenth centuries. Since the later part of the nineteenth century, however, the study of vases became a scholarly pursuit and their decoration was the obsession of connoisseurs gifted with the ability to recognize and attribute the hands of individual painters.

The most well-known vase connoisseur of the twentieth century, a researcher concerned with attribution, typology, and chronology, was Sir John Davidson Beazley. Interested in Athenian black-, red-figure, and white-ground techniques, Beazley did not favor beautifully painted specimens; he was impartial and studied pieces of varying quality with equal attention. From his tedious and exhaustive examinations, he compiled well-over 1000 painters and groups, and he attributed over 30,000 vases. Although some researchers since Beazley’s death continue to attribute and examine the style of specific painters or groups, vase scholars today also question the technical production of vessels, their archaeological contexts, their local and foreign distribution, and their iconography.

Beazley Archive at the University of Oxford