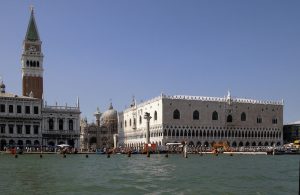 Petrarch, the fourteenth-century Tuscan poet, called Venice a “mundus alter” or “another world,” and the city of canals really is different from other Renaissance centers like Florence or Rome.

Venice is a cluster of islands, connected by bridges and canals, and until the mid-19th century the only way to reach the city was by boat. In the fifteenth and sixteenth centuries Venice suffered numerous outbreaks of the plague and engaged in major wars, such as the War of the League of Cambrai. But it also boasted a stable republican government led by a Doge (meaning “Duke” in the local dialect), wealth from trade, and a unique location as a gateway between Europe and Byzantium. 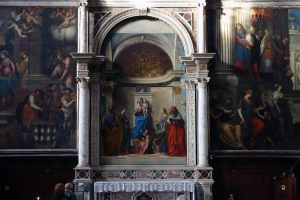 Painting in Early and High Renaissance Venice is largely grouped around the Bellini family: Jacopo, the father, Giovanni and Gentile, his sons, and Andrea Mantegna, a brother-in-law. Giorgione may have trained in the Bellini workshop and Titian was apprenticed there as a boy.

The Bellinis and their peers developed a particularly Venetian style of painting characterized by deep, rich colors, an emphasis on patterns and surfaces, and a strong interest in the effects of light. 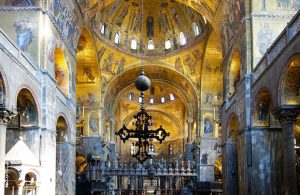 While Venetian painters knew about linear perspective and used the technique in their paintings, depth is just as often suggested by gradually shifting colors and the play of light and shadow. Maybe Venetian painters were inspired by the glittering gold mosaics and atmospheric light in the grand Cathedral of San Marco, founded in the 11th century? Or maybe they looked to the watery cityscape and the shifting reflections on the surfaces of the canals?

The Venetian trade networks helped to shape local painting practices. Ships from the East brought luxurious, exotic pigments, while traders from Northern Europe imported the new technique of oil painting. Giovanni Bellini combined the two by the 1460’s-70’s. In the next few decades, oil paint largely supplanted tempera, a quick-drying paint bound by egg yolk that produced a flat, opaque surface. (Botticelli’s Birth of Venus is one example of tempera paint, which you can learn more about here). 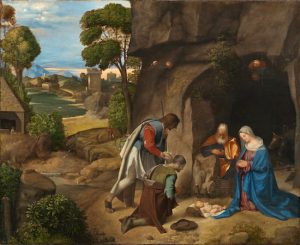 To achieve deep tones, Venetian painters would prepare a panel with a smooth white ground and then slowly build up layer-upon-layer of oil paint. Since oil dries slowly, the colors could be blended together to achieve subtle gradations. (See this effect in the rosy flush of the Venus of Urbino’s cheeks by Titian or in the blue-orange clouds in Giorgione’s Adoration of the Shepherds—above). Plus, when oil paint dries it stays somewhat translucent. As a result, all of those thin layers reflect light and the surface shines. Painting conservators have even found that Bellini, Giorgione, and Titian added ground-up glass to their pigments to better reflect light.

Venetian painting in the 16th century 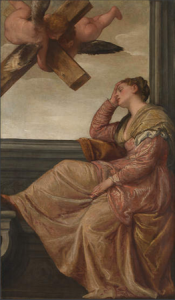 Over the next century Venetian painters pursued innovative compositional approaches, like asymmetry, and they introduced new subjects, such as landscapes and female nudes. The increasing use of pliable canvas over solid wood panels encouraged looser brushstrokes. Painters also experimented more with the textural differences produced by thick versus thin application of paint.

In the Late Renaissance Titian’s mastery was rivaled by Tintoretto and Veronese. Each attempted to out-paint the other with increasingly dynamic and sensual subjects for local churches and international patrons. (Phillip II of Spain was particularly enamored with Titian’s mythological nudes.) The trio transformed saintly stories into relatable human drama (Veronese’s The Dream of St. Helena), captured the wit and wealth of portrait subjects (Titian’s Portrait of a Man), and interpreted nature through mythological tales (Tintoretto’s The Origin of the Milky Way).

Sacra Conversatione from The National Gallery

Madonna of the Pesaro Family from the University of Mary Washington

Bellini, Giorgione, Titian, and the Renaissance of Venetian Painting