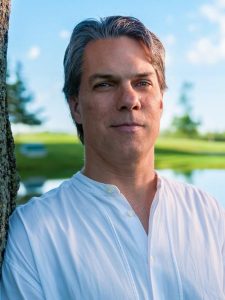 [April 26, 2017] was the 80th anniversary of the bombing of the Basque town of Guernica by fascist air forces from Spain, Italy, and Germany. It was a joint deal, with fascists sticking together across national lines. They bombed civilians, women, dogs, men, children, their churches and shops, their sheep and goats. Well over 1,000 people died. Many more lives and livelihoods were destroyed. Thousands of Basque children traveled to Britain as refugees.*

The aftershocks were great, not least of which was the waking of Pablo Picasso from his interior slumbers, his fetishes of bowls, breasts, and bottles. He stirred and sketched and painted, and then stirred some more, ultimately culminating in perhaps one of the 20th century’s greatest works of art, the massive oil-on-canvas mural simply known as Guernica. It was finished just in time for the World’s Fair in Paris that July, after which it toured across northern Scandinavia, the UK, and then on to the U.S., not returning to Spain until 1981, after Franco died and the fascists had packed up their political shops.

At 3.5 meters (10 feet) high, and nearly 8 meters (25 feet) in width, the work not only fills a room, it creates its own room. Rather, it creates its own world. And that’s key in its affect, its ability to put us, the viewers, into that space, with those whose homes were bombed, whose bodies were torn apart, whose children had died. This is art that triggers an empathetic response, not unlike what all those images of the suffering Christ or grieving Mary were meant to do. We feel the pity and presence in the re-presentation. We are stirred to com-passion, a “suffering with.”

Among other commemorations of this date, the Reina Sofia Museum in Madrid mounted a significant new exhibition around Picasso’s work, “Pity and Terror: Picasso’s Path to Guernica.” It’s a remarkable collection of materials, running from Picasso’s work around 1925, extending through the afterlife of the painting and its reception during the Spanish Civil War and World War II, ending in 1945.

I’ve had the good fortune of walking through the Picasso Museum in Malaga, Spain (the city of the artist’s birth) and the Picasso Museum in Paris, France (the city where he worked much of his life), and seen many more of his paintings and sculptures along the way. I’ve never left a gallery unimpressed by his mastery of lines, his ability to see shapes and relations between things, and then represent them for the rest of us.

What none of that prepared me for was the Spaniard’s thorough obsession with monstrous and nightmarish forms through the 1930s, before there was such thing as “Guernica.” The Reina Sofia show highlights how he really wasn’t only depicting bowls, breasts, and bottles. Or, he was, but only as he monumentally mutated them into images of isolation, of insides out, of horror. He’s traveling a European landscape that had just begun pulling itself out of a World War and the loss of tens of millions of lives. And then he’s watching it all rev up again. 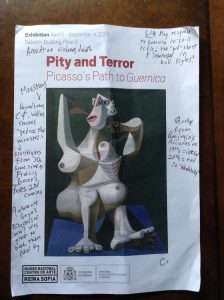 During this time Picasso’s misogynistically distorted women morph into abstract monuments littering unreal landscapes, like they’ve broken free from their portrait studios and remain at large. Simultaneously, he’s sketching a handful of Crucifixion scenes, some of the only works in his immense career with explicit religious content. Like the deconstructed women, the crucifixions could almost be deemed what we call in English “still life” paintings: fruit, meat, containers, flowers in formal arrangement. Bringing us closer to the truth is the Spanish term for such a genre, naturaleza muerta (“dead nature”).

It is the great artistic lie that captures natural life, pins it down, dissects it, and then shows it to all of us as if it’s still living, walking among us; now a prodigious, perverse husk of a natural thing. The crucifixion is the greatest still life of all.

Picasso didn’t want Guernica to return to Spain as long as the fascists were in control. Franco the fascist certainly didn’t want it either (though some stories indicate Franco’s late-in-life desire to appropriate it into his nationalist vision).

Why is fascism so constantly afraid of art? Art is not anti-fascist in and of itself; there are plenty of really good fascist artists. But fascist art has a highly delimited palette. It wants art that achieves one goal, that of legitimizing the ruling forces. Meanwhile so many of us have come to believe in the mythology that art must be free, and only therein find some true meaning, tautologically because it gives freedom.

But still, what does art do? Bottom line? What can it do in the face of monstrosity? Of violence toward the innocent? Is it enough to grieve? Protest? Provide hope?

Poet Wallace Stevens may have another part of an answer. In the same year as Guernica, Stevens published “The Man with the Blue Guitar.” He’s got Picasso on the mind, intoning, “That I may reduce the monster to / Myself, and then may be myself / In face of the monster . . . ” Here too, I think it has something to do with art’s abilities to re-present, channel com-passion, all that artistic ability to switch places with another. Not just with those suffering, but also with those monstrous. The monster shows us ourselves. The re-presentation is the presence of our interior selves, now pinned still upon the wall. 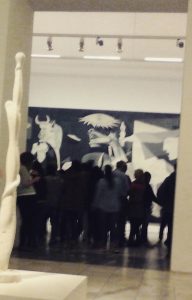 Part of the genius of Picasso’s Guernica, not often replicated, not even by Picasso himself, is that it combines the grieving, rebuilding, and protesting into one room. A room in which we can stand today and continue to grieve, rebuild, and protest. It’s the relentless struggle and cycle of freedom.

Coda. Last weekend I stayed in Bilbao, Spain, in the shadow of the now 20-year old Guggenheim Bilbao, a museum often credited with the revitalization of this post-industrial region, in spite, or because, of its $100 million construction costs. Just 20 miles from Guernica, starchitect Frank Gehry’s titanium-clad, deconstructed, dry-docked ship of a museum is itself guarded by Jeff Koons’s monumental public art work, Puppy. Koons said his giant Chia Pet should inspire “confidence and security,” a couple of post-9/11 terms if ever I heard them. And I realize that in spite of my socialist-aesthetic idealism, it is probably the free enterprise of capitalism, more than free art, that has been central in the defeat of fascism. But I’m also aware that art can’t be reduced to political-economic bottom lines. And maybe it’s the perpetual Protestant in me that believes protest is valid, effective. And maybe it’s the nascent Buddhist in me that believes compassion can change the world. 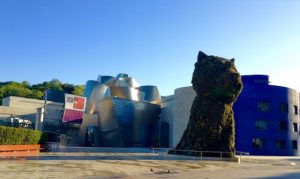 * The details of the war crime were only brought to the world’s attention by embedded reporting on the part of The Times (London), and then picked up and run by New York Times and elsewhere. It’s not the intent of my writing here to discuss this, but it must be mentioned now in an age that again suffers from major leaders working to shut out the press.