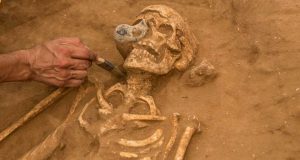 A researcher cleans the skeleton of a person interred around 3,000 years ago at a recently discovered Philistine cemetery along Israel’s coast. A small jug was placed on the dead person’s face at the time of burial.

A roughly 3,000-year-old cemetery on Israel’s coast is providing an unprecedented look at burial practices of the Philistines, a mysterious population known from the Old Testament for having battled the Israelites.

Work at the Ashkelon cemetery from 2013 to 2016 has uncovered remains of at least 227 individuals, ranging from infants to older adults. Only a small section of the cemetery has been explored. Archaeologist and excavation director Adam Aja of the Harvard Semitic Museum estimates that approximately 1,200 people were interred there over a span of about 100 years.

“For the first time, we have found a formal Philistine cemetery,” Aja said November 18 at the annual meeting of the American Schools of Oriental Research. Aja and his colleagues first announced having found the Philistine graveyard on July 10. He was among several researchers to present their latest findings about the cemetery at the meeting.

Despite the new discoveries, the geographic origins of the Philistines remain unknown, Aja said. It’s also unclear how early Philistines reached the Middle East or how much their culture changed by the time they started burying theirdead at Ashkelon.

Philistine burial practices have been discussed and debated for about a century. Other ancient Philistine sites in Israel, also identified in ancient texts, have yielded individual graves and small-scale burial grounds.

At Ashkelon, the dead were interred in several ways. Most individuals were placed in shallow pits, often with pairs of jugs or storage containers near the bodies. Some pits contained a person’s remains that had been buried on top of one or more previously interred bodies. Bronze earrings, bracelets, rings and other jewelry adorn most skeletons of children and women. Several pit graves of male skeletons include ornamental beads or engraved stones.

One grave holds a set of iron arrows near a man’s hip. A quiver probably once held the arrows at the man’s side, Aja suggested.

At least eight stone burial chambers capped with stone slabs were also found. The largest chamber held skeletons of 23 individuals. These burial chambers were aligned in three rows that ran parallel to the coast, Aja said.

Tapered storage jars found in pit graves and burial chambers were influenced by pottery of the Canaanites, a nearby population along the Mediterranean coast, said team member Janling Fu of Harvard University.

Fu suspects the excavation is located at the cemetery’s edge. Considerable space between some burials suggests denser clusters of grave sites lie nearby, he proposed, raising the prospect of learning much more about how the Philistines treated their dead.

Although the excavation is in its early stages, it’s clear that Philistines buried at Ashkelon show signs of physiological stress, reported bioarchaeologist and team member Sherry Fox of Eastern Michigan University in Ypsilanti. Many individuals’ teeth have signs of growth interruptions caused by fever, malnutrition or a range of possible biological disorders, she said.

Relatively short average heights for people buried at Ashkelon — about 5 feet, 1 inch for men and 4 feet, 10 inches for women — also fit a scenario of biological stress, Fox said. Short stature and minimal height differences between men and women occur with population-wide stresses such as malnutrition, she said.

The Philistines were a famously combative crowd. Archaeologist Eric Meyers of Duke University, who was not a member of the Ashkelon team, wondered if at least some of those buried at Ashkelon had been killed in battles or fights. But no head injuries or other skeletal signs of violent encounters appeared among the dead at Ashkelon, Fox said. Neither did any skeletons contain evidence of tumors or cancers.

If DNA can be extracted from the Ashkelon skeletons, scientists may get a glimpse of where the Philistines originally came from. Evolutionary geneticist Johannes Krause of the Max Planck Institute for the Science of Human History in Jena, Germany, is currently directing efforts to retrieve genetic sequences from the Ashkelon bones.

“Our work has only just begun,” Aja said.

S. Fox et al. The contextual study of the human skeletal remains from the Philistine cemetery at Ashkelon. Annual meeting of the American Schools of Oriental Research, San Antonio, November 18, 2016.