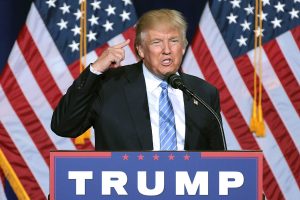 Here in Philadelphia, a sudden cold snap brought an abrupt end to a long and dazzling Indian summer. As the wind skittered across our garden and sent the dead leaves flying, I stepped outside and took a fond last look at the annuals. They were still bursting with blooms, but tonight would bring the first frost. Tomorrow they’d most likely be defunct, and a long winter lay ahead.

I left the flowers to their fate and thought about the despondent mood shared by so many Americans in the wake of Donald Trump’s improbable victory. It’s as if we were on the eve of a killing frost, and those of us who loved the warmth and color of American life had gone into mourning.

He did it. He really did it. The most unconventional, intemperate, uncouth and narcissistic presidential candidate in memory snatched an electoral triumph from the anointed one, the articulate and female one — the well-connected progressive globalist in the smartly tailored pants suit.

Who would have believed it a year ago? Who can believe it now, two weeks after the election? We’ve witnessed one of the most stunning upsets in American political history, and it’s still sinking in.

Sometimes, in my darker moments, I feel as if we’ve drifted into uncharted waters during the Age of Exploration. Many of us are wondering if we’ll soon be sailing over the edge.

Hillary Clinton won the popular vote by a comfortable margin, so how did she blow the election? Simple: her campaign essentially snubbed the pivotal (and populous) Rust Belt states. Even more disastrously, she snubbed the downwardly mobile, demoralized, mostly white workers who used to constitute the rock-solid core of the Democratic base. Joe Biden never would have made that mistake.

Meanwhile, the Democrats focused on cementing their bond with minorities and the progressive elite — an unlikely urban alliance of the underprivileged and overprivileged: inner-city poor, well-educated people of all colors, student activists and affluent coastal chardonnay-sippers. They encouraged the ironclad grievance narratives of blacks, feminists, gays, transgender people and other self-conscious subsets of American society.

Identity politics surged to the forefront of Democratic discourse. The social justice warriors glowed with righteous (and frequently self-righteous) passion. Solidarity with progressive social causes became almost mandatory for admission to the more desirable social circles. Stepping off the “reservation” on any issue could mean ostracism, an unceremonious unfriending on Facebook and the gnashing of teeth.

Democrats like to style themselves as the party of diversity, and that’s fine. But their brand of diversity hasn’t extended to evangelical Christians, blue-collar workers, old white men, rural Americans, cultural conservatives and other untouchables. On the contrary, the social justice warriors blame these outcasts for most of society’s ills: not only racism, misogyny and homophobia, but gun violence, xenophobia, religious intolerance and stubborn opposition to science.

Many of these accusations are true enough, but they all depend on the kind of sweeping negative stereotypes that good liberals revile when they’re aimed at non-Christians and people of color. It doesn’t seem to matter. In some circles, whiteness itself is to be reviled and white history systematically stripped of honor. Down with Columbus, Jefferson, Robert E. Lee, Woodrow Wilson and even that noble slaveholder George Washington!

Eventually the conservative white outcasts had all they could take. What happened next? They forged their own renegade brand of identity politics. They became conscious of their whiteness and their increasing marginalization by the forces of demographic and cultural change. You could say the Klan went mainstream; call it KKK Lite. It was an understandable reaction to being despised by the Democrats and threatened by the future, but it wasn’t pretty.

Even before Trump’s victory, we saw signs that a white resistance movement was brewing. The far right’s populist Tea Party revolt should have been a tip-off. Ditto for the perverse gun mania that proliferated across the republic, especially after well-publicized mass shootings. Ditto for the Obama Derangement Syndrome that afflicted so many opponents of the 44th president from day one.

Granted, much of the Obamaphobia was based purely on political differences. And yes, Obama could have used his bully pulpit to heal America’s deepening racial rift instead of reflexively siding with every Black Lives Matter grievance. But I still wonder how a thoughtful, mildly liberal biracial president could have provoked such over-the-top hostility from the right. The fact that Obama was smart, dignified, classy and morally above reproach seemed to infuriate his enemies all the more.

Suddenly Trump arrived on the scene as a conduit for their rage, and Trump Nation was born. Trump’s own racist propensities have been greatly exaggerated. He hasn’t maligned blacks, he doesn’t plan to harass Muslim Americans, and his proposed vendetta against illegal immigrants extends mainly to criminals and gang members. At least that’s what he tells us.

Still, it’s no exaggeration to say that Trump liberated a few decades’ worth of pent-up racial and religious animosity within the white outcast class. The orange-faced billionaire hustler from Queens broke the dam that had been holding all that resentment in check. His crass bluntness suddenly made America safe for bigotry.

The stormfront has been blowing in from the right. Exultant Trumpistas have been rampaging across the countryside with random acts of vandalism, fascist graffiti and verbal abuse. Neatly dressed Neo-Nazis have been hailing Trump and calling for the establishment of an Aryan state. This is not a joke, and the civilized world is aghast.

Trump publicly warned these fanatical hatemongers to “just stop it,” but it’s anyone’s guess if they’ll listen — or if he genuinely wants them to. Meanwhile, the president-elect has been filling his inner circle with an assortment of hard-line archconservatives and alt-right provocateurs. There’s not a single Mister Rogers among them. These dudes (and so far they’re all vintage white dudes) mean business.

Now the left is in full panic mode. Salon, Daily Kos, Huffington Post, MSNBC and all the other left-leaning news sources in the Western world are rushing to cite each new nugget of evidence that Trump’s triumph represents the second coming of the Third Reich. Children of illegal immigrants wonder if they’ll be yanked out of school and deported. American Muslims worry about internment camps.

Does The New Moderate insist that “it can’t happen here”? Not exactly. You could lose money betting on the sanity of a president who tweets at 3 a.m. and asks for equal time on Saturday Night Live. But I trust even a conservative Republican Congress to override President Trump if he starts emulating Herr Hitler.

The president-elect might not know his Constitution, but the saner heads in Congress do. Besides, I suspect they wouldn’t mind handing the sceptre of power to a level-headed right-winger like Mike Pence if Trump goes ballistic on the job.

Where do we go from here? Until further notice (or an unprecedented sleight of hand by the Electoral College in December), we have to accept Trump as our president. That’s the nature of a democratic (small d) republic. We can hope he makes good on his promise to revive American manufacturing jobs, restore our crumbling infrastructure and undercut the influence of lobbyists in Washington. As for the rest of his agenda, not so much.

Trump’s relatively magnanimous victory speech, his civil meeting with Obama and his reassuring demeanor on 60 Minutes gave me reason to hope that his ugly campaign was mere vulgar showmanship designed to bedazzle the disaffected masses. He’s been backpedaling on some of his signature wingnut positions: building the Mexican wall, locking up Hillary Clinton, denying manmade global warming. But no, some of his recent antics (e.g., insisting that theaters should be “safe spaces”) have convinced me that Trump will always be Trump.

Yes, I’m concerned about the Trump presidency that looms ahead. Many of us (myself included) feel that we’re entering a bleak dystopian world spun from the imagination of Orwell or Philip K. Dick. I’m not despairing just yet, but I’m keeping my eyes open.

As a diehard moderate, I’m even more concerned about the gaping divide between progressives and conservatives in this country. Their chronic antagonism, a long and venerated American tradition, has deepened into blind hatred. Both sides isolate themselves in their comfy ideological cocoons; they tend to read only the opinions that confirm their biases. And they’ve adopted a zero-tolerance policy toward the opposition.

Reinforced by hysterical fake-news headlines, one-sided Facebook memes and a chorus of like-minded peers in their amen corners, their biases have been growing into strange, malevolent creatures with lives of their own. It’s almost as if the left and right are evolving into separate and incompatible species, and all of us should be alarmed by this trend. We need to merge again, desperately.

Meanwhile, behold the sad ruins of what used to be a lush and vibrant garden. The frost is spreading, and the flowers are dying. Unless all of us can rally around the common ideals that used to make us Americans, I’m afraid we’re headed for a brutal winter.