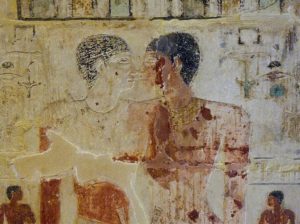 Portrait from inside Niankhkhnum and Khnumhotep’s mastaba

Sexuality in Ancient Egypt is a subject to be approached with caution. Norms in regard to sexual behavior cannot be looked at with our Western understanding of sexual identity as many cultures, both past and present, do not create categories based on the same things we do. Moreover, we must be careful when interpreting both written and artistic accounts of sex as we might cast our own assumptions and biases–such our inclination to ascribe to individuals monosexual identities–onto those who don’t fit into our mutually exclusive sexuality boxes.

In art, sex is not usually explicitly detailed, though since much artwork was either in tombs or temples it can be argued that their sexual acts were not depicted so as to avoid their desecration. That is not to say that the ancient Egyptians never drew graphic pictures; often, at least one party was drawn as an animal to censor the act as the Egyptians had a certain prudishness towards illustrations of sex between two humans. Beyond this, the Ancient Egyptians did not seem to be terribly shy about sex. Their mythology relies heavily on sexual themes, and there are many (possible) coded messages and euphemisms about sex riddled within the art itself. For example, King Tutankhamen is shown on a chest using a bow while his wife stands by his feet with an arrow at the ready; the verb “to shoot” in the Ancient Egyptian language also means “to ejaculate.” This is symbolic of the need to have sex in order to be reborn after death. Moreover, their religion itself was stepped in sexual themes, including the ithyphallic god Min. 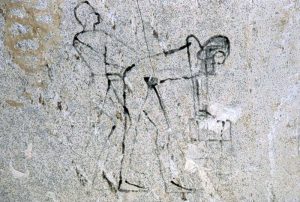 As for art showing humans in sexually explicit positions, there is the famous example of graffiti of a pharaoh and a man commonly thought to be Hatshepsut and Senenmut. It would have been highly taboo to draw the queen in this manner.

There was apparently no concept of virginity or any sort of expectation for it. Individuals could freely pursue sexual relationships so long as both parties were unattached.

The Ancient Egyptians have a history of using birth control; different methods can be found in the Kahun Gynecological Papyrus. One form of contraception included the use of acacia gum, about which it has since been learned that when compounded it essentially becomes spermicide. Various other substances were used inside of the vagina, including pessary made of crocodile dung. 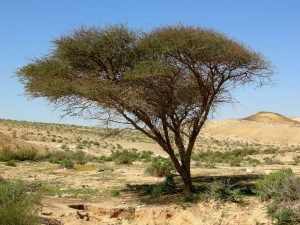 Adultery was highly taboo in Ancient Egyptian society with both men and women punished for this act. Emasculation for a man may have been a punishment for the rape of a married woman while consensual sex would result in both people being punished by whipping or mutilation, possibly even put to death. This is in the context of pursuing a relationship with a married woman, so male extramarital affairs with unmarried women did not reflect badly on his character in the same way it did with a married woman or on cheating wives. However, men were not granted a free pass: it has been recorded that in some communities cheating husbands would experience social stigma for their actions.

Many deities wed their siblings in Egyptian mythology: She and Tefnut; Geb and Nut; Osiris and Isis; Seth and Nephthys. Egyptian royalty copied this pattern; King Tutunkhamen’s parents, for example, were siblings. This culminated a family line of inbreeding that caused the family to suffer from many malformations, infections and genetic diseases. However, there is little evidence indicating that the common masses frequently married their siblings. Premarital sex between two siblings was strange, but it was not considered taboo.

“Marriage is, of course, no evidence for a lack of ‘homosexual’ activities or inclinations, but it is an indication of the prevailing social attitudes.” – Dr. Robert Bedrosian, Egyptologist

Seth and Horus have had a long history of one-upsmanship and some pretty awkward sexual tension. Seth, who has long wanted to be the chief god of the pantheon, tries to assert his dominance over Horus by having sex with him, planning to have penetrative or intercrural sex with Horus. By putting Horus in the “womanly” or passive position, Seth would have elicited the anger of the other gods towards Horus. This does not come to pass, however, thanks to aid of Isis who helps her son keep Seth’s semen off his body and plots to turn the tables around, making Seth appear to be the receptive partner by tricking him into eating Horus’s semen. (Though, some sources say that both men were equals in the sense that they were able to penetrate one another.) What can be gleaned from this story is that it was not homosexual relations themselves that were looked upon negatively but, like in Ancient Greece, the partner in the “passive” role who was disdained. 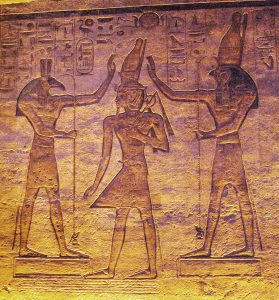 When Egyptologists first uncovered the tomb of Niankhkhnum and Khnumhotep at Saqqara, they were shocked to see that these two men not only shared a tomb, but that there was also art work depicted them in close, very intimate poses. Rather than believing that they were in a romantic and/or sexual relationship, the theory was immediately proposed that these two were merely brothers–nothing else. Some have even gone so far as assert that Niankhkhnum and Khnumhotep were conjoined twins to explain why they are touching so often in artwork. They are depicted embracing in the same manner as heterosexual couples, which carries the same connotations of closeness in the context of sexual relations. This has spawned a very intense debate.

The theory of them being siblings is a weird heteronormative approach to this relationship that quite honestly is baffling to the mind: they could not be lovers because their wives and children are depicted on their tomb’s walls. This is not an adequate response. First, let’s break it down: behavior does not equal orientation. Because it was important to have children to care for their cult after death, their wives may have only served as a means to an end. As much as they loved one another, Niankhkhnum and Khnumhotep could not reproduce together, necessitating them to find wives to fulfill this purpose. However, this is under the biphobic suggestion that these two men must be monosexual. Both could have been attracted to multiple genders or sexes, and so may have had a romantic and/or sexual attachment to their wives and each other. 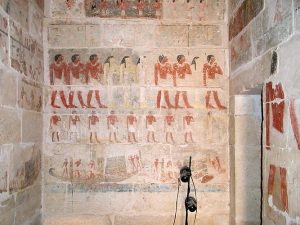 Scene from inside Niankhkhnum and Khnumhotep’s mastaba / Wikimedia Commons

A more than likely fictional tale from either the 18th, the 19th or the 25th dynasty, Neferkare was a pharaoh and Sasenet was one of his generals. The story goes that a man named Tjeti saw Neferkare walking somewhere during the night and decided to follow him. The pharaoh went to Sasenet’s house, where he stayed for quite some time in the embrace of his lover before returning to his home. This process would then repeat itself. This tale alludes to the relationship between Osiris and Ra, the later rising to fulfill his duties as a sun deity at the end of their nightly embrace. It is a parody piece of that myth, and is useful in determining that, given the tone, homosexual relations at this point in time were scandalous, but were not so taboo as to be unmentionable.

As to whether or not two women could be stigmatized for being in a relationship, it is unknown. There are some readings of Nephthys being a lesbian due to her infertility and the ambiguous sexual orientation of her husband. While I am not sold on Nephthys being a lesbian–though she and Isis had a close enough relationship I can certainly believe it–I would think that female homosexuality would likely not be seen as strange or as a threat. 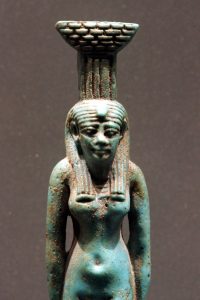 The Ancient Egyptians apparently engaged in bestiality often, from cows to dogs to even crocodiles. This practice was illegal and carried high penalties, but amazingly people continued to practice it anyway.

In Egyptian mythology, Seth murdered and dismembered Osiris, necessitating Isis and Nephthys to collect the pieces. They were able to recover every part of Osiris except for his penis, so Isis created a new phallus for him. Restored, Isis has sex with her husband and thus conceives Horus. This helped to create the belief that even after death a person still had sexual power, which if unspent could wreak havoc. Herodotus wrote that some corpses would not be delivered to the embalmers for several days to prevent them from copulating with the deceased.