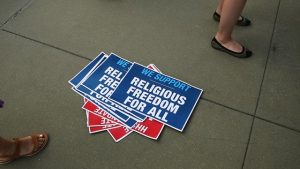 U.S.-based Religious Right groups have a long track record of collaborating with their counterparts in other countries to restrict women’s health choices and make life harder and more dangerous for LGBT people around the world. This year was an especially active one in this global human rights struggle. U.S. Religious Right leaders have clearly taken sides, teaming up with many of the most repressive regimes in the world to resist equality for LGBTQ people.

This year’s political climate in the U.S. could also have lasting implications for LGBT rights around the globe: The election of Donald Trump could be devastating to people around the world if it means an end to human rights advocacy that the U.S. government carried out during the Obama administration. Those Obama administration efforts were fought bitterly by the Religious Right leaders who helped Trump win the presidency, and some have already begun to pressure the incoming administration to reverse the Obama State Department’s policies on LGBT rights.

Among the nations attracting attention from Religious Right activists this year has been Mexico. Marriage equality has been spreading across Mexico through a series of court rulings and injunctions, but after the president proposed making equality a constitutional guarantee, conservative Catholic and evangelical leaders began mobilizing in opposition. In September, they held marches around the country culminating in a major rally in Mexico City. U.S. Religious Right activists have lent their support to anti-equality activists in Mexico. Among the activists’ U.S. supporters are National Organization for Marriage President Brian Brown and the intensely anti-gay Brian Camenker of MassReistance, who has said he sent Mexican anti-equality activists digital files of his group’s anti-marriage equality booklet.  Sofia Martinez, legal counsel for ADF International in Mexico, praised the anti-marriage marches.

Resisting Progress at the United Nations

For many LGBT people around the world, marriage equality is not even on the agenda, as they lack basic human rights protections and face harsh, even deadly, penalties simply for being gay or advocating on behalf of equality. The United Nations is an important venue for human rights advocates to try to enshrine basic protections within international agreements. But that effort is vehemently resisted by U.S. Religious Right groups, notably C-Fam (formerly the Catholic Family and Human Rights Institute, now the Center for Family & Human Rights).

This year, C-Fam’s Austin Ruse organized a new coalition called Civil Society for the Family to advocate for resistance to the recognition of LGBT human rights at the UN. C-Fam also sponsored a high-level event at the UN in May that brought Religious Right leaders together with representatives of countries who are part of the Group of Friends of the Family, a coalition of many of the world’s most repressive regimes who are united by their desire to see traditional ideologies on gender and marriage enforced by international law. Among the countries praised for their “pro-family” activism were Iran, Saudi Arabia and Russia.

Human rights advocates won a major victory this year when the UN’s Geneva-based Human Rights Council voted to create a new independent expert position charged with investigating discrimination and violence on the basis of sexual orientation and gender identity. C-Fam fought hard against the creation of the position, calling it “a major pro-family setback.” C-Fam has supported repeated, and so far unsuccessful, attempts by African nations, members of the Organization of Islamic Cooperation, and Russia to effectively eliminate the new independent expert position, which has been filled by Thai diplomat Vitit Muntarbhorn.

The Alliance Defending Freedom, the largest Religious Right legal group in the U.S., has been expanding its presence around the world through its international affiliate, which “advocates for parental and family rights on an international level at institutions such as the United Nations, the European Union, and the Organization of American States,” according to the group’s website. “Its lawyers are also active at the European Court of Human Rights.” ADF opposed the creation of the independent expert position, saying it would advocate for “so-called nondiscrimination laws” that are “wide open to abuse.”

Debates at the UN are not empty posturing; at stake are questions about who is recognized as a family in international law and whether human rights are universal or should be subordinated to “traditional” religious and cultural beliefs about gender and sexuality. Religious Right groups clearly prefer the latter: ADF International’s Senior UN Counsel Rubén Navarro declared, “Issues concerning ‘sexual orientation and gender identity’ should remain within the purview of each Member State’s domestic legal order.”  Earlier in the year, ADF opposed provisions of a UN document that “recognize the diverse and changing forms of the family unit.”

The World Congress of Families (WCF), an international network of anti-LGBT social conservatives, held its summit meeting this year in Tbilisi, Georgia; the May meeting was timed to commemorate a violent attack on gay rights activists in 2013. At the Georgia meeting, National Organization for Marriage President Brian Brown was elected as the new WCF president. In a fundraising email, Brown wrote:

This is a pivotal time in history for the natural family. Good people around the globe are willing to resist the demands of the secular left and the pressures of western powers to change their cultures and policies. But they need the leadership of WCF to continue to be effective and to help sustain the worldwide movement in support of the natural family.

The gathering adopted the “Tbilisi Declaration,” which says governments and international agencies should “end efforts that redefine marriage, returning to the conventional and natural understanding of one man in a voluntary union with one woman for life” and “cease all propaganda in favor of ‘gender theory’ and ‘sexual orientation’ which has no basis in biological reality.”

American Religious Right activists have defended and even cheered the adoption of harsh anti-gay laws in Africa. At a WCF regional conference in Nigeria in September, WCF’s Don Feder told Kenyan and Nigerian Christians that they should be “horrified” by the advance of LGBT rights in the U.S.

“The problem is this is a way people are living and they’re demanding that it be respected, they’re demanding that all of society be changed for their comfort and their convenience,” Feder said. “We’re not saying that these people have to be persecuted, we’re not saying that you can’t have compassion for them, of course you can, but you can’t let this be the role model and you can’t allow Christians and other religious people to be persecuted because they refuse to go along with this agenda.”

In December, Brown and a group of activists from around the world announced the creation of yet another global anti-LGBT group, the International Organization for the Family (IOF), which will now run the WCF as one of its projects. At the IOF launch event in South Africa, activists signed the “Cape Town Declaration,” a manifesto the new group will use as a vehicle for building its list of supporters. The declaration’s signers vow: “Bowing to no earthly power, using every just measure, we shall not falter or flag until the truth about marriage is embraced in our laws and honored in our lands.”

At the South Africa event, WCF leaders decided that the group’s 2017 gathering will be held in May in Budapest, Hungary. The choice of Hungary is not terribly surprising, as Eastern and Central Europe is a battleground for anti-LGBT activists fighting what they say is imperialism from a secular and decadent West. In June, Scott Lively, one of the Religious Right activists who has taken his anti-gay activism around the world, posted a reflection about his admiration for Hungarian Prime Minister Viktor Orbán, a strongman who pursues an “illiberal” authoritarian nationalist vision. Orbán has purged the civil service, packed the courts, restricted freedom of the press and ushered in constitutional provisions defining marriage as between one man and one woman and stating that life begins at conception, all while invoking Hungary’s Christian culture.