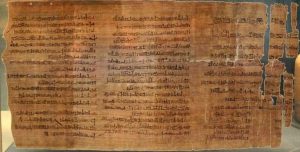 The Egyptians used a variety of terms to refer to their settlements.

While it would be convenient to equate common Egyptians terms with roughly understandable English equivalents (e.g. nỉwt = ‘city’, dmỉ = ‘town’, wḥyt = ‘village’, probably pronounced niwet, demi, wehyt), any analysis of the ways in which these terms were used by the Egyptians, over what is a very long period, indicates that such an equivalence is an over-simplistic interpretation.

One of the difficulties we face when considering these terms is the fact that we do not know the extent to which they are used in a specific, taxonomic way and that in which they are used rather more loosely. This is not something unique to Egypt: a Briton who was questioned about the difference might comment that cities are generally larger than towns, but if asked why Bolton in Lancashire with a population of 140,000 is a town and Truro in Cornwall with a population of less than 18,000 is a city, they might then flounder around popular misconceptions about the possession of cathedrals as the distinctive marker of being a city (the cathedral-test is anachronistic; in the UK the sole determining feature of a city is its possession of royal letters patent). More generally, anyone referring to ‘London town’ or a ‘downtown’ area of New York is using a colloquial means of referring to two of the largest metropolises in the western world. In a similar way, the term ‘Inner City’, which appears to be a neutral means of referring to an aspect of a city, has specific connotations in the English-speaking world relating to lower-income residential districts in or close to the city centre; this is a definition that would not apply to, for example, the affluent Innere Stadt districts of Vienna.

An example of this type of looseness in an Egyptian context can be seen in the papyrus Onomasticon of Amenemope, which provides a list of significant locations during the 21st Dynasty. Under the heading dmỉ, a variety of places are listed, including examples that are described as a nỉwt, a wḥyt and a ḥwt (hwt). To explain this, we need to accept that the word dmỉ, at least in this specific context, is a term that is not part of any ranking order of settlements, but is probably a very loose definition, perhaps denoting ‘significant places’. Austrian Egyptologist Manfred Bietak suggests that, in this context, the thing the places listed under the heading dmỉ have in common is a topographic or cultic importance, but not necessarily any settlements; he notes that ẖny (kheny) – Gebel Silsila, a site important for its quarries and chapels but hardly its population centre – is listed here. One might also note other place names that seem primarily to refer to geographical features rather than population centres, such as individual Nile branches or the marshlands of the Delta. Although, of course, the term dmỉ might mean something else entirely, a topographical significance in the term is also suggested in the following analysis.

There are several surviving manuscripts of the Onomasticon of Amenemopeincluding this one in the British Museum also known as Papyrus Hood (BM 10202). British Museum, London.

Canadian Egyptologist Donald Redford argues that terms for human settlement in ancient Egypt reflect their function and, fundamentally rural, origins. It is certainly the case that Egyptian words for different types of settlement can give an insight into their appearance, functions and origin:

dmỉ probably derived from the verb ‘to touch’, indicating a place where ships ‘touched’ the land, so that a dmỉ is essentially a riverbank settlement. This is confirmed by a common writing of the word, which has as its determinative a sign that often means ‘riverbank’. This definition would also work for the Onomasticontext we considered above.

ỉ3t (iat, ‘mound’) a natural description of a settlement located on the flood-plain of the Nile whose vertical growth over a substantial period of time (tell formation) would give it an island-like appearance, especially during the inundation when it may well have become an island. This term is reflected in the modern Arabic terms ‘Tell’ and ‘Kom’, which refer to mounds formed by long-term settlement.

nỉwt this is perhaps the most interesting term of all. It is the term most usually associated with very large settlements – cities – and, in the New Kingdom, Thebes became known simply as nỉwt, ‘The City’. The hieroglyph for nỉwt

has often been interpreted as a circular walled town with cross roads but, as Redford has noted, the earliest clear examples of this hieroglyph show that it is formed from four conical huts surrounded by a circular enclosure. The word used to describe the magnificence of imperial Thebes was ultimately derived from the image of a collection of a few simple huts! 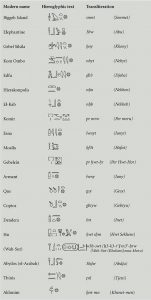 ẖnw (khenu) usually translated as ‘the (royal) Residence’ this word originates in the term for ‘interior/inside’. It is a perfect description of the royal ‘centre’ of palace administration and residence, and was especially associated with the Memphite royal centre of the Old Kingdom and the Middle Kingdom ‘residence’ at Itj-Tawy.

The Onomasticon of Amenemope, after it has finished listing the towns of Egypt, goes on to list different types of dwelling. In order these are:

bḫn (bekhen) ‘villa’, most usually (as in the Wilbour Papyrus) the building(s) at the core of a country estate.

wḥyt (wehyt) a small settlement equivalent to a village or hamlet, probably originating in the word for ‘clan/tribe’, and therefore indicating a settlement that was (in theory at least) principally occupied by one extended family. 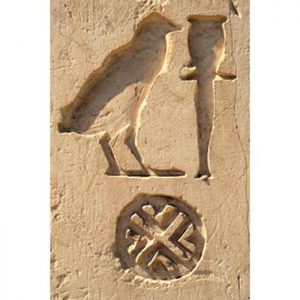 The detail of the niwt town-sign is carefully carved in this writing of the name of Elephantine, Abu. Rutherford Press Ltd.

pr (per) ‘house’, both as a physical building and, increasingly, in the wider sense of the estate or property of an individual or (often) god.

‘t (at) originally ‘room’, it came to mean ‘house’ in the specific sense of a built structure.