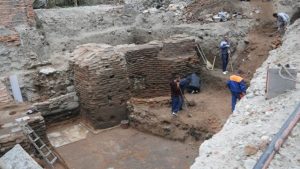 A previously unknown building of Ancient Roman thermae (public baths) has been discovered during the construction of a residential building in the southern Bulgarian city of Plovdiv, the successor of ancient Philipopolis.

The well preserved walls of the Roman bath house have just been exposed in rescue excavations led by archaeologists Maya Martinova and Sofiya Hristova from the Plovdiv Museum of Archaeology, reports local news site Plovdiv24.

The discovery has been made on private property located at 13 Otets Paisiy (“Father Paisius”) Street in downtown Plovdiv, which is also known as “Europe’s oldest city“.

The project for the construction of a residential building there has been controversial, first of all, because it provided for the destruction of a home from the 1920s with a cultural heritage status, but also because later one of the archaeologists noticed that the builders had reached structures from the Antiquity period.

An inspection of Bulgaria’s National Institute for Cultural Heritage Properties over the late summer had found no irregularities with the project, and had allowed the construction to continue. So it did up until the Roman thermae ruins were exposed recently.

The inspection occurred after archaeologist Sofiya Hristova, who has been excavating the prehistoric, ancient, and medieval Nebet Tepe Fortress in Plovdiv, passed by the construction site, and noticed a large amount of ancient tiles extracted by the construction workers, and a destroyed Antiquity wall.

She alerted the respective institution, and is reported to have been threatened with physical violence by the executors of the project. Ultimately, however, she has been proven right, and Plovdiv Municipality has made possible the rescue excavations. 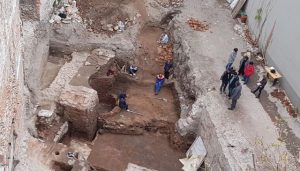 The Ancient Roman thermae have been found during the construction of an apartment building in downtown Plovdiv. Photos: Plovdiv24 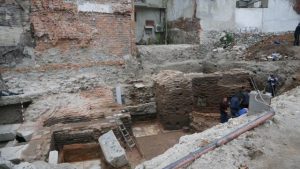 The ancient thermae building is said to date back to the period when some of Plovdiv’s main archaeological landmarks were constructed, including the Antiquity Theater (also called “Antiquity Amphitheater”), which was voted recently the city’s top landmark and celebrated the 30th anniversary since its restoration, and the Ancient Roman Stadium.

The Roman bath house is to be excavate for several more days in rescue digs by the archaeologists from the Plovdiv Museum before it is assessed by a commission from Bulgaria’s Ministry of Culture which is then expected to issue recommendations to the owners of the property as to how to preserve the Roman ruins.

Bulgarian media have noted that the discovery of the ancient thermae in Plovdiv is reminiscent of a famous play called “The Roman Bath” authored in 1974 by Bulgarian playwright Stanislav Stratiev.

Some have noted that the destruction of the 1920s house by the builders has been for the better because it has made possible the discovery of the unknown Antiquity Roman bath house.

The area in downtown Plovdiv where the discovery has been made is believed to harbor more archaeological structures because it has not been researched in detail since it is densely developed, and the buildings are private property. 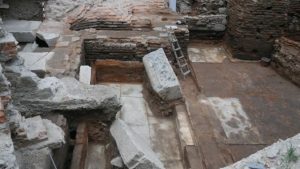 The area where the Roman bath house has been found is densely populated and has barely been explored by the archaeologists. Photos: Plovdiv24 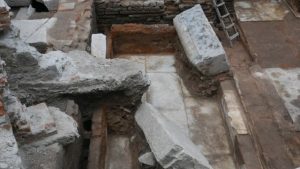