From the biographies of Lian Po and Lin Xiangru, by Huang Tingjian, c.1095 / Metropolitan Museum of Art, New York

Calligraphy (in Chinese, Shufa 書法, in Japanese Shodō 書道, in Korean, Seoyae 書藝, all meaning “the way of writing”) has been a defining manifastaton of Asian art and one of its most revered cultural achievements. Asian calligraphers like abstract artists are greatly concerned about the compositional harmony, aesthetic characteristics , and the overall impact of their work on the viewers.

Chinese calligraphy reached its zeniths during the Jin and Tang Dynasties. Tang Dynasty in particular is praised as the golden age of Chinese culture, with calligraphy as one of its crowning achievements. In the Tang Dynasty the government set up academies for studying calligraphy. Calligraphy was used to asses the talents of a person and was considered as a way for selecting promising candidates. 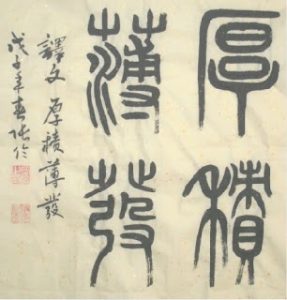 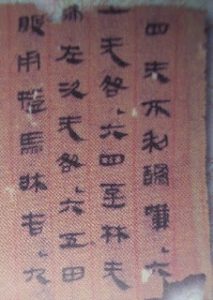 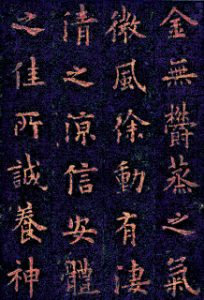 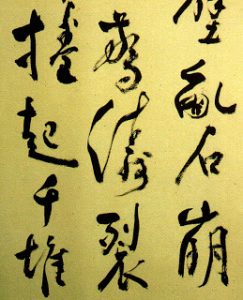 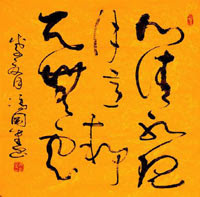 Chinese calligraphy has been divided into five major styles: Zhuan Shu (篆书); which today mostly confined to seal carving, Li Shu (隶书); which is the traditional official style and was mainly dominated the calligraphy style of the Han Dynasty in 206 B.C.-220 A.D, Kai Shu (楷书); which was the most common form of printing, and also constitutes the standard form of Chinese’ writing, Xing Shu (行书); which is the most commonly used form of hand writing also known as ‘running style’ and finally Cao Shu (草书), the Chinese cursive style, mostly used by calligraphers for highly abstract works but also seen in everyday use. All these major forms can be divided further in various sub categories. There are also two earlier styles which are no more in common use and were not originally executed by brush, namely, the Jia Guwen ( 甲骨文) or “oracle bone script” and the Jin Wen (金文) which were characters engraved on bones, shells and bronze, sometimes categorized under Zhuan Shu.

Japan adopted Chinese calligraphy most enthusiastically after the introduction of Buddhism there in the mid-6th century, but the art of calligraphy was not pursued until the early years of the Heian era (794 to 1185), when Japan’s so-called Three Great Brushes (Sanpitsu 三筆) began practicing calligraphy as an art. The great strides in Japanese calligraphy progress occurred in the Kamakura Era (1185 to 1333). The introduction of Zen Buddhism to Japanese culture during this period contributed significantly to wide adaptation of calligraphy. Traditional Japanese Calligraphy is called Shodo (shodou) and is based on Chinese verse which uses couplets or quatrains of four, five, or seven syllables. 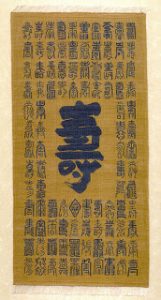 “Ju” Longevity / Replica of an 18th c. work by the famous Japanese calligrapher Hakuin.  This type of calligraphy was presented to elderly family members or friends for special occasions.

The Chinese ,Japanese and Korean calligraphers typically use thick black ink and ink brushes to write their characters (called Hanzi in Chinese, Kanji in Japanese, and Hanja in Korean). Chinese characters have a predetermined order of strokes which means every calligrapher must obey a particular sequence of strokes in writing the characters. A skilled calligrapher can use these strokes to create a whole range of moods. Shen Yinmo, for example, could write characters which the famous calligrapher Sun Guoting (648-703?) would have praised for being so sharp that you felt chilled when you looked at them, or so soft that they brought to mind the blush on a young girl’s cheek or a pearl of dew on a lotus leaf. Sun Guoting also has said in his Manual on Calligraphy (dated 687) that calligraphy reveals the character and expresses the emotions of the writer.[1] 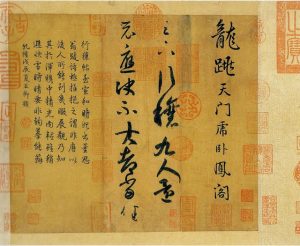 Wang Xizhi ( 王羲之, 303–361) was a famous calligrapher of the Eastern Jin Dynasty (265–420) and the greatest of all time, known as the Sage of calligraphy. He was a native of today’s Linyi of Shandong Province. He also served as a general and an imperial officer, hence his another name – Wang Youjun.

Wang stdied calligraphy under Wei Shuo, and some of his best writings were preserved on carved stone tablets, Stone rubbings taken from them have been reproduced and reprinted widely. Hid most famous work is Lan Ting Xu (Preface to the Literary Gathering at the Orchid Pavilion).It is said that Emperor Taizong of the Tang Dynasty (618-907) treasured the work and had it buried in his tomb. 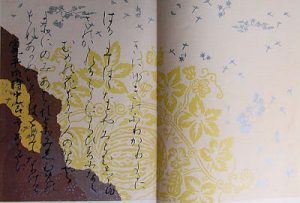 Hoshi Sosei born Yoshimine no Harutoshi is a Japanese Calligrapher and poet. His father was the renowned Henjo, a Japanese waka poet and Buddhist priest, who is listed as one of the Six best Waka poets and one of the Thirty-six Poetry Immortals. In 885 he was ranked in Sojo and called Kazan Sojo (花山僧正).

Hoshi Sosei was born around the year 850. He became a monk, writer and jurist .He directed the monastery Riyau-Inwin at Isono-kami, in the province of Yamato. He was a priest of the Tendai school. In 877 he founded Gankei-ji in Yamashina, in the southeast part of Kyoto. In 869 he was given another temple Urin-in in Murasakino, in the north of Kyoto and managed both temples. Hoshi Sosei’s calligraphic artistry is very much in tune with his poetical sentiment. Here is one of his waka poetry contributed for a Hyakunin isshu (百人一首)

Now I have to wait
Only for the Naga Tsuki morning moon* to appear,
But thy word of promise
To come and see me soon!
*Ariake in origina 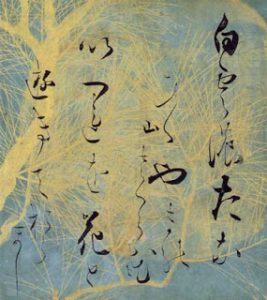 Hon’ami Kōetsu was a Japanese calligrapher that is also known for his accomplishments as a craftsman, potter and lacquerer. Kōetsu family were sword polishers and connoisseurs who had served the Imperial court as well as the other major warlords of the Sengoku period (1467-1603). Hon’ami Kōetsu would become acquainted with many members of the art community through his family connections with the Maeda family, one of the most powerful samurai families in Japan.

He learned the art of calligraphy from Prince Sonchō, who is said to have taught him the style of the famous classical Chinese calligrapher Wang Xizhi. He became one of the most prominent calligraphers of this era. Like many of Japan’s greatest calligraphers he was inspired by the court writings of the Heian period.
He created a many artistic works, all in a flowing cursive style that were reminiscent of the classical tradition. Along with Konoe Nobutada and Shōkadō Shōjō, he came to be known as one of the Three Brushes or Sanpitsu of the Kan’ei Era (寛永の三筆, kan’ei no sanpitsu).

Kōetsu also developed his own unique style of calligraphy, and taught it to many of his students.
Hon’ami had a close artistic colaboration with the painter Tawaraya Sōtatsu for about fifteen years. Sōtatsu has decorated many of Hon’ami calligraphic works in gold leaf and paint. Sōtatsu was a major member of the Rinpa school, and his paintings most likely inspired by Hon’ami’s influence and style. 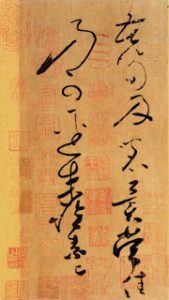 Huai Su, also Known as Cangzhen (藏真), was calligrapher in the Tang Dynasty. He was born in modern Changsha, Hunan and later in life became a Buddhist monk. He made his national fame in his early thirties when he came to Chang’an, which was then capital of China. Famous poets of his time spoke highly of his works, including Li Bai.

His contemporary Lu Yu wrote in his Life of the monk Huai Su (僧懷素傳): “He was broke and had no paper for writing. So he planted tens of thousands of banana trees in his hometown [to obtain leaves] to practice his art (貧無紙可書，嘗於故里種芭蕉萬餘株，以供揮灑)”.

In Chinese art of calligraphy he is famous for his cursive style. Less than 10 pieces of his works have survived.