The summit of Mt Zagaras north of Athens. Jason König

In ancient times, they were the shrines and ritual sites to the Greek gods. These days, they’re astonishingly unloved and neglected. 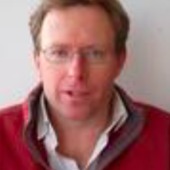 The mountains of the Mediterranean are permanent reminders of the past. The ancient Greeks climbed to their summits to offer sacrifices to the gods for centuries, even millennia, and handed down stories from generation to generation of the battles and myths which played out on their slopes – Zeus’s defeat of the Titans on Mt Olympus in northern Greece, for instance; or the legendary cave on Crete’s Mt Ida where the goddess Rhea concealed the infant Zeus from his father Cronus to prevent him from being eaten.

There are still traces of these ancient places of worship today. We know of about ten mountaintop sanctuaries with surviving material in mainland Greece and the Aegean, and many more in other parts of the eastern Mediterranean, including dozens on Crete. You might think that these reminders of European life from thousands of years ago would be among the most cherished and protected sites in the world. Instead they are mostly neglected, unloved and ignored.

Not long ago I climbed Mt Zagaras at the eastern end of the Helikon range, a couple of hours north-west of Athens. In ancient times this was a place of tourism and pilgrimage in honour of the Muses, the goddesses of artistic inspiration. The climb starts from the Valley of the Muses, near to the site of the village of Askra, where the Greek poet Hesiod lived. At the head of the valley are lots of columns scattered around the ground, with goats wandering in and out. For centuries this was the site of the great festival of the Muses, whose competitions attracted poets and musicians from all over ancient Greece. 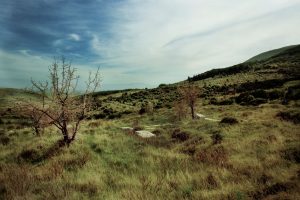 Climbing a wide track to the east, you see beehives everywhere, and you can hear bees buzzing in the trees. After a couple of miles you turn uphill very steeply – about a 500m climb. Just below the summit ridge at the edge of a steeply sloping pasture is the sacred Hippocrene spring, which is famously said to have been formed by the hooves of Pegasus. It runs three or four metres below a gap in the rocks, with clouds of flies buzzing above. Fixed to the rock is a rusty chain and a plastic bucket: I had a small sip for inspiration.

From here it’s an hour west to the summit, scrambling along the big outcrops of rock which line the ridge. You can see for miles from the top. There are also the remains of a small building, which may originally have been an altar of Zeus, though some think it’s more likely to have been a watch post.

I didn’t see another walker anywhere on Mt Helikon, or on any of the other mountains I climbed in Greece on that trip. But of all the ancient sites I have visited, I find it hard to think of any more memorable.

The lack of interest in these treasures is well illustrated by Mt Arachnaion in the Peloponnese region in southern Greece. Its highest point is home to the ruins of altars to Zeus and also Hera, queen of the Greek gods. It was a place for ritual and sacrifice dating back to the time of the Mycenaeans, Greece’s first ancient civilisation (1600 BC to 1100 BC). Now it is the site of a wind farm. If you stand by the ruins, with just the ravens and swifts for company, huge turbines stretch both ways along the ridge. While they have been kept away from the summit itself, it feels precarious to have permitted them so close to the site. 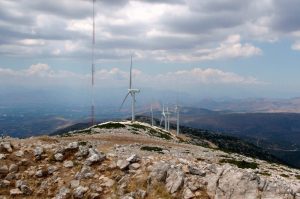 This lack of interest can occasionally pose a much greater threat. Mountain archaeological sites are usually too inconspicuous to be targets for the deliberate destruction we have seen at Palmyra in Syria, but accidental damage is another matter. The summit of the great mountain of Jebel Aqra on the Turkish border with Syria is the site of the biggest surviving ash altar from the ancient world, 55 metres wide and eight metres deep, containing the remains of countless sacrifices. It now stands within a Turkish militarised zone, inaccessible to archaeologists. And last November, Turkish forces were accused of firing mortars from the mountain over the border into Syria.

While I don’t want to suggest that the Mediterranean’s mountain archaeology is urgently under threat, the wider neglect is disheartening. In some cases the sites are inaccessible, partly because many Greek mountains are topped by military installations. This makes these ritual places more difficult to detect and excavate, which may be one reason why many others referred to in the ancient sources have never been found.

For the sites that we do know about, this looks like an enormous missed tourism opportunity. One model for how to do better is Mt Lykaion and the surrounding territory in Arkadia in the centre of Greece’s Peloponnese region. This is the birthplace of Zeus and the legendary home of Pelasgus, the first of the Pelasgians, the mythical inhabitants of Greece. 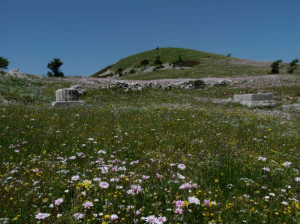 Ruins below the summit of Mt Lykaion. Jason König

With the help of both local communities and archaeologists, it has recently been turned into the Parrhasian heritage park. The plan is to attract tourists and spread awareness through walking trails and a website. The first information boards and route markers were set up last year, with more to follow in the coming months. You can still see fragments of burned animal bones scattered all over the ground on the summit, the remnants of sacrifices many centuries ago.

Especially at a time of economic hardship in Greece, this kind of approach could point the way forward. These precious sites are among the world’s oldest treasures. Looking down from their summits, it is hard not to be overwhelmed by the feeling that people enjoyed the same view thousands of years earlier. It is difficult to understand why they are so ignored.