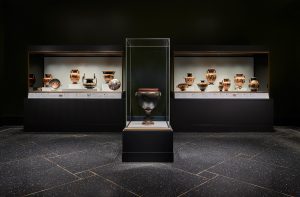 A curator selects details on ancient Greek pottery with clues about myth, trade, gender, and literacy in the ancient world.

One of the new spaces in the reinstalled Getty Villa is Gallery 103, a former coat-check area that has been converted into a room for the display of Athenian pottery. In devising the chronological and geographical layout for the Villa, we dedicated one gallery, 104, to Archaic and Classical Greece (800–323 B.C.), but didn’t want to overwhelm it with ancient pottery. We also didn’t want to restrict one of the richest aspects of our collection to just two or three cases. The new room therefore enables us to display more material and explore topics from different angles.

Since Gallery 104 provides a chronological overview of Greek pottery, the neighboring space instead presents four thematic groupings: the symposion; Herakles and Theseus; the Sack of Troy; and vase painters and their identification. Across these broad topics there are even more connections and opportunities for comparison. Here are ten other suggestions for exploration—also known as ideas for which I didn’t have space on the exhibition labels.

One of my favorite details to point out on this skyphos is an ancient fingerprint; the painter left it when he accidentally smudged the band of red and black tongues at the base. With the vessels attractively arranged within our new museum showcases, the fingerprint is a salutary reminder that the potters and painters did make mistakes. 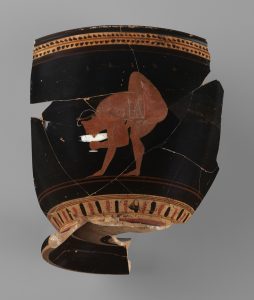 This fragment shows a black fingerprint on the bottom rim. Fragmentary skyphos, about 500 BC, attributed to near the Theseus Painter (vase-painter) and the Heron Class (potter). Terracotta, 6 1/4 × 4 3/4 × 5 1/2 in. The J. Paul Getty Museum, 76.AE.127.a. Digital image courtesy of the Getty’s Open Content Program

Moreover, these pots were utilitarian objects, vulnerable to damage after they left the workshop. This neck-amphora not only has a repaired handle (see the holes and cuttings at its base) but also—almost-imperceptibly—a replacement mouth from another vase of similar size.

The vases also display traces of more recent interventions, as many have undergone treatment by our conservators. Some fragments remain just that, since there’s not enough left to reconstruct their original shape. In other cases, the careful use of fill materials permits reassembly, although individual figures and pictorial motifs are only “completed” where we are certain about the iconography.

On this cup, for example, the shape has been reconstructed but not the figures on the exterior. For another cup, the fragments have been assembled into a cup-like form, so their correct orientation is apparent, but the handles and foot have not been recreated.

The opportunity to study objects in the conservation laboratories during the process of reinstallation allowed us to pursue new investigations. The gallery label for this mixing bowl (pictured below) had noted that the stand, which stylistically doesn’t seem to belong, is “modern.” Technical analyses confirmed that it is in fact ancient. The stand and bowl could have been paired in antiquity, or, more likely, they came together after the latter was discovered in 1873.

Keeping with the theme of shapes, the grouping of 40 or so vases in the new gallery highlights trends and practices in potting. Compare, for example, the different types of hydria (water jars), including the earlier, sharp-shouldered black-figure type and the more organic, smooth-shouldered red-figured version. Likewise, drinking vessels can be low- or high-footed, with a deep or shallow bowl and a smooth or angled rim. All share the same function but are diverse in form.

These permutations may indicate trends and tastes within the pottery workshops or among their customers, but other external influences are also apparent. Influences might have come from other crafts—for instance, the shiny ribbing of this mixing bowl evokes metalwork—or other cultures. The strange shape of the nestoris (vessel with upswung handles), for example, was an attempt to appeal to markets in Southern Italy. 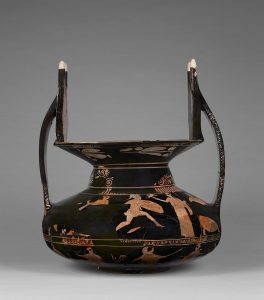 The nestoris was an attempt to appeal to markets in Southern Italy. Attic Red-Figure Nestoris, about 440 BC, attributed to Polygnotos. Terracotta, 16 3/8 × 14 1/8 in. The J. Paul Getty Museum,81.AE.183.2. Anonymous gift. Digital image courtesy of the Getty’s Open Content Program

The nestoris offers perhaps the most visible manifestation of the export of Athenian vases across the Mediterranean. Once transported, vases may have been used in ways their makers had not intended. With its witty decoration of ships sailing around the interior, this dinos was made for mixing wine and water. Yet it was found in a grave at Capua, where it was most likely used as a cinerary urn. 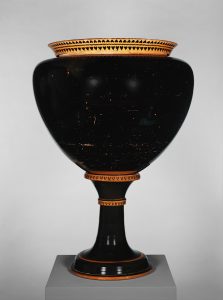 Created in Athens, Greece, this vessel was excavated at Capua, Italy, attesting to vases’ role in international trade. Attic Black-Figure Dinos, 520–510 BC, attributed to the Circle of the Antimenes Painter. Terracotta, 22 13/16 in. diam. The J. Paul Getty Museum, 92.AE.88. Digital image courtesy of the Getty’s Open Content Program 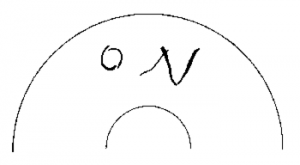 For me, the export of Athenian vases remains one of the most fascinating aspects of studying this material. Did potters and painters know that their wares would travel? Did they tailor their production accordingly? And how was transport organized? Some vases preserve clues, such as this amphora, which has a mark (a graffito) that a trader or merchant incised underfoot. 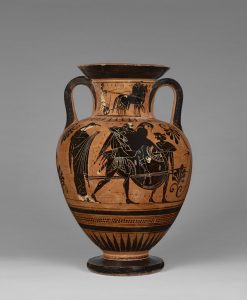 But literacy in ancient Athens is best thought of as a spectrum, and not every painter was entirely literate. On this neck-amphora showing Aeneas rescuing his father from Troy, the figures of Aphrodite, Anchises, and Aeneas are labeled in good Greek. But other strings of letters, such as πετελευχ, which runs to the left of Aphrodite, and μεχτεετϛ, to the left of the charioteer on the neck, make no sense.

Remaining with this amphora, it’s not entirely clear whether there should be a connection between the scene of Aeneas saving his father and the chariot team on the neck. Perhaps the latter serves as a visual reinforcement, repeating the escapees’ rightward movement.

Sometimes painters did select scenes that relate to one another, as is apparent on a cupshowing the suicide of Ajax. The exterior sides show two key narrative moments: Ajax’s fight with Odysseus over the arms of Achilles, and the subsequent vote by the Greek army, which led to the horrific outcome depicted within.

Elsewhere, two ostensibly unconnected stories can be fruitfully juxtaposed. The Amazons prepare to go into battle against Herakles on this volute-krater, while underneath, Peleus wrestles with Thetis as her sisters flee for safety. They are different tales, but both portray women in opposition to the traditional male-oriented order of things.

Athenian society was centered around men. This Panathenaic amphora highlights the complex status of women, as figures both valued and marginalized. As is typical, Athena appears on one side. She was the patron—or better, matron—goddess of the city, and she always appears on these prize vases because the festival for which they were produced was in her honor.

She is depicted as a warrior, with a shield, spear, and helmet, yet while she may transcend the boundaries of gender—battle was typically men’s domain—the painters still depicted her with white skin. Such is the convention for female figures in black-figure vase painting, conveying the notion that female flesh should be pale, i.e., unexposed.

Leaving myth aside, women are often shown as the subject of male desire at the symposium, and a drinking vessel known as a mastos quite literally objectifies the female breast (mastos is the Greek word for breast). 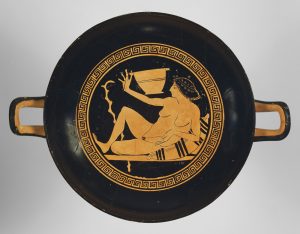 Yet women were not always without autonomy, as is apparent in the unusual cup shown above. The inside of the vessel shows a woman reclining on a couch playing kottabos, which involved throwing dregs of wine at a target. The game took place at the symposium, which makes it a male pastime. At first glance the sight of a woman playing kottabos seems to be pure fantasy—either laughable or sexual or both. But what if it’s not so unimaginable? What if we’re seeing a woman at leisure inhabiting a traditionally male role?

Beyond being a test of accuracy and dexterity, kottabos involved an assertion of sexual or romantic interest. The player casting the throw would utter the name of his—or her—beloved. A vase in St. Petersburg shows a similar scene: the woman casting the throw says, “This one’s for you, Leagros,” dedicating her effort to one of the popular young men of the day, the uber-desirable Leagros. Is the woman on our cup an object of desire, or a desirer herself?

Our reading of the scene within the cup might shift when we think of how it was viewed. When full of wine, the tondo (the image on the cup’s interior) was hidden, only revealing itself as the symposiast drained his drink. The viewer was thus actively involved in the process of seeing—or revealing might be a better word, given the woman’s nudity—the image. This could be a powerful visual experience: just imagine encountering the corpse of Ajax in this way.

Painters also depicted spectators on the sidelines. On one of the vases that we’ve looked at already, Aphrodite oversees her son’s rescue of Anchises, while on another, Athena is present as Herakles’s supporter when he steals Apollo’s tripod (Artemis appears on the other side, cheering on her brother). But perhaps the most intriguing example is this young girl who watches as an older woman guzzles wine in the kitchen. What must she be thinking? 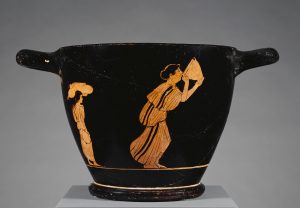 All these figures are rendered in profile, and the directions they look can be meaningful to the narrative. The drunken man pissing into a pot pays no attention to his attendant, while the sulking Achilles is brooding so deeply that he fails to respond to Odysseus. One of the few frontal faces on the vases in this gallery is a figure who is clearly only concerned with himself.

The vases can also look back at their users. This head vase in the form of an African youthis an obvious example, but other vessels bear large eyes on the exterior. As cups, we can imagine them functioning as masks at the symposium. They would cover a drinker’s face as he consumed his wine, casting him as a follower of the wine god Dionysos.

But what about when eyes are painted on shapes other than cups? On this mixing bowl, eyes are depicted on either side of Odysseus, who is shown escaping from the Cyclops by cunningly strapping himself underneath the monster’s sheep. Are these eyes purely decorative or potentially meaningful? Perhaps they nudge us to recall that moments before Odysseus embarked on his sly ruse, he fixed a burning stake deep into the Cyclops’s single eye.

Myth, trade, gender, and literacy are just some of the topics worth discussing in regard to the pottery on display in the recently opened Gallery 103. My hope is that the new installation provides a point of departure for many more.

For those of you interested in exploring all or any of these themes in more detail, the following are some recent books and articles that might be of interest: