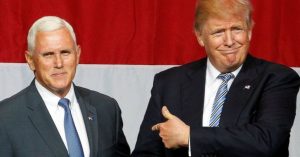 Gov. Pence is famously—or infamously—right-wing, and a particular darling of far-right Evangelical voters.

Pundits surmised that Trump is attempting to sway the conservative Christian portion of the Republican party, which had previously rallied behind Ted Cruz.

Progressives decried the decision. Leftists pointed out Pence’s plethora of policy stances and decisions that have threatened civil rights, women’s health, the environment, and the welfare of the most vulnerable since he was elected to Congress in 2000 and then as Indiana’s governor in 2012.

“Look, I don’t know that [climate change] is a resolved issue in science today.”—Gov. Mike Pence, 2014

Regarding Pence’s climate stance, Greenpeace listed the many times in which Pence acted against the climate and for the oil and gas industry:

Pence has also expressed doubt regarding evolution. “Do I believe in evolution? I embrace the view that God created the heavens and the earth, the seas and all that’s in them,” he said on MSNBC in 2008.

In the late 1990s, long after scientists had conclusively shown that cigarette smoking was linked to lung cancer, Pence dismissed such claims as “hysteria.”

In March, Pence signed into law what reproductive rights activists characterized as “one of the worst anti-abortion bills in the country.” As Common Dreams reported:

The law, which Pence said he signed “with a prayer,” makes Indiana the second state in the nation, after North Dakota, to ban abortion in cases where a fetal anomaly is detected.

It also mandates the burial and cremation of miscarried or aborted remains; restricts fetal tissue donation; and requires doctors performing abortions to have admitting privileges at a hospital or to have an agreement with a doctor who does.

Civil rights groups subsequently sued the state over what they described as a “cynical, deceptive attempt to ban abortions.”

Pence also joined many right-wingers in attacking Planned Parenthood in response to a fake video purporting to show the group selling bodily tissues. (The filmmakers were eventually indicted for tampering with government records.)

Last year, Pence signed into law the so-called “Religious Freedom Restoration Act” that gave “legal cover, under the guise of ‘religious liberties,’ to any businesses or individuals who wish to violate anti-discrimination laws,” as Common Dreams reported.

Pence and Indiana Republicans capitalized on a decades-long manipulation of “religious freedom” as an excuse to exclude and punish groups they see as immoral or repugnant, leveraging religion’s perquisites to create a bubble of legitimated pre-Civil Rights Era prejudice (and tax avoidance). Only Pence and company went too far: Indiana’s RFRA didn’t just protect religious intolerance from government interference but actually empowered business to discriminate against immoral other folk without risk of civil rights lawsuits. Only, when pressed even to answer yes or no as to whether Pence had just signed a bill that legalized religious discrimination of gays, he sputtered and retreated. Typically, the Onion did the best job of anyone when it came to nailing him to a wall.

“Governor Pence has a long history of fighting to cut and privatize Social Security,” writes Nancy Altman, co-director of the progressive group Social Security Works. Altman released the following statement in reaction to Trump’s choice of Pence for VP:

In 2005, [Pence] was the leader of a group of House Republicans who criticized George W. Bush’s Social Security privatization plan for not being extreme enough! He supports raising the retirement age and other cuts to Social Security benefits. This despite the fact that the nation is facing a looming retirement income crisis, which is likely to be harshest for younger Americans.

Igor Volposky, deputy director of the Campaign for America’s Future Action Fund, dug into congressional records and discovered that during his tenure in the House of Representatives, Pence had served as “Bush’s chief war propagandist” when it came to the U.S. invasion of Iraq:

There was also that time in June 2003 when Mike Pence found Iraq’s WMDs and bragged about how Bush was right. Oops. pic.twitter.com/7jjoJIazqq

Many pundits pointed out the contradiction between Trump’s and Pence’s stances on the Trans-Pacific Partnership (TPP) trade deal.

“Before he became governor of Indiana and a candidate to be Donald Trump’s vice-presidential nominee, Mike Pence was a congressman, and he voted for every free-trade agreement that came before him,” the Washington Post wrote.

Pence’s stance has apparently already hurt his state’s workers: “This year, Pence urged an Indiana manufacturer, Carrier Corp., to reconsider a decision to move 1,400 jobs from Indiana to Mexico. The company is continuing with the plans but agreed to repay some state and local tax incentives,” the Post reported. “After meeting with the company, Pence said he did not want to give Indiana workers ‘false hope’ that the jobs would stay in their state.”

[Pence’s] positions on immigration are anti-immigrant and anti-family. If Donald Trump wasn’t enough to alienate Latino voters, a Trump/Pence ticket will be the ultimate deal breaker for one of the fastest-growing demographics.

His latest attack against immigrants and their American children came when he joined 25 other Republican governors in a lawsuit that blocked Obama’s executive initiatives on immigration, DAPA and DACA that would have shielded approximately five million undocumented immigrants from deportation.

Governor Pence is not a friend of the immigrant community.

And in response to Trump’s decision, Twitter erupted on Friday with comments both decrying and quipping about Trump’s choice:

Pence is going to help Trump with voters who can’t decide if they’re more worried that gay people will get wedding cake or health care.

I assume all the Trump-Pence/T.P./toilet paper jokes have already been made?