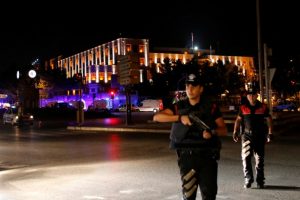 There are reports of troops being deployed to the streets of Ankara and Istanbul. The prime minister says a group within the military is trying to stage a coup.

News of a coup in Turkey came as a surprise to the world, but not as great a surprise as it might have been in some countries. In the second half of the 20th century, the nation fell into a pattern of semi-regular military coups, and by that rhythm, it was in fact overdue. Previous coups came in in 1960, 1971, 1980, and 1997, so that the 19-year gap between the last uprising and today was notably long.

Modern Turkey was founded by Mustafa Kemal, a general in the Turkish Army who was later formally granted the surname “Ataturk,” or father of the Turks. Ataturk set about an aggressive program of modernizing and “Westernizing” the country, pushing religion to the margins, banning certain apparel like headscarves and fezes, and converting Turkish from Arabic to Latin script. But that secularism has always remained tenuous. Many Turks, especially rural ones, are religious, and not all of the reforms have remained popular.

The military has long seen its role as safeguarding Ataturk’s secularist agenda, and when it worries the government is shifting too far away, it has tended to take action. The first coup, in 1960, was a response to two currents: Prime Minister Adnan Menderes was both making overtures to Moscow and opening up to religion, reopening shuttered mosques, allowing the call to prayer to be sung in Arabic and more. A few dozen officers launched a coup in May 1960. Menderes was executed the following year after being convicted of violating the constitution.

The military relinquished control to civilians in 1965, when Süleyman Demirel was elected. But by 1971, growing unrest had emboldened Islamists, and the military again stepped in. This time, it did not launch tanks but instead delivered an ultimatum to Demirel, demanding “the formation, within the context of democratic principles, of a strong and credible government, which will neutralize the current anarchical situation and which, inspired by Atatürk’s views, will implement the reformist laws envisaged by the constitution.” Demirel resigned; the military did not directly take control.

Nine years later, amid continued instability, the military again intervened, this time seizing power and holding it for three years. There followed a period of relative political stability. But in 1997, generals decided to depose Prime Minister Necmettin Erbakan, the head of an Islamist party. The military again enacted a coup by memo, forcing Erbakan’s resignation and banning him from politics.

Turkey has thus occupied a strange position in world politics: Although it is prone to coups d’etat, Western governments have often cheered the coups on, with varying degrees of enthusiasm, because they are in the service of a secular agenda. Periodic deposition of democratically leaders has, somewhat paradoxically, been treated as a small price to pay for ensuring liberalism.

Already, some analysts are shruggingly embracing the latest coup as a way to rid the country of the increasingly autocratic President Recep Tayyip Erdogan. But what is not clear yet in the latest coup is whether it fits the same pattern of secular Kemalists clamping down on Islamism. There is speculation that the coup’s leaders may in fact be loyal to Fethullah Gulen, an enigmatic Muslim leader who’s currently in exile in Pennsylvania—that’s certainly what Erdogan claimed in his FaceTime address to the nation. Gulen is a former Erdogan ally who was essential to his rise, but the men have since broken. Whether Western leaders would be as eager to embrace a Gulenist coup as a Kemalist coup is unclear, though concerns about how Turkish instability could affect the civil war in Syria might render that question irrelevant: For outsiders, any leaders—whether Gulenist or Kemalist—may be preferable to ISIS.