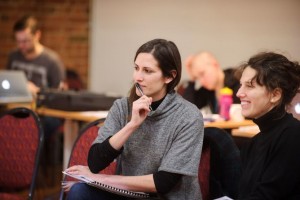 The playwrights were usually financially backed by politicians whose primal aim was to indoctrinate citizens into the ideology of democracy that celebrated debate.

Sophocles’ Antigone puts these two loyalties (religion and state) against one another and questions whether the political realm can control personal faiths. In Griffiths’ adaptation, the political figure is no longer the authoritarian Creon, Anouilh and Brecht adapted post-WW2, but a Julie Bishop-like Leader whose supreme convictions are executed with the type of order and precision Australian citizens would admire.

She has both style and grace and she is even unafraid to do dirty man’s work – the perfect female politician in all its beauty and gore. On the other hand, there’s Antigone, not the glorified freedom fighter, but the self-indulgent idealist who is just too young and naïve to realise that the state knows best.

Who wins? State or religion? Creon or Antigone? Old or young? In Greek tragedy there is never a winner, just a set of competing answers, striving to prove their worth.

For that reason, Greek tragedy remains the perfect vehicle for philosophers, from Hegel to Butler, as it can be appropriated to suit any episteme, from dialectics to gender performativity. What other dramatic form has been appropriated and re-appropriated into many art forms for thousands of years?

Greek tragedy can fit into any time and place and yet it still seems to evolve and change, reflecting our public concerns in the most private ways.

This is how Plato defined all art forms: a reflection of life known as mimesis. This new adaptation of Antigone bravely reflects not the self, but the abject other, epitomised by the corpses that dominate and resonate on the stage. Plato exiled poetry from his ideal republic and now Griffiths takes the violence out of the backstage and makes us smell it.

This is what Aristotelian catharsis is all about: purging out our inner fears and pities. Freud used Greek tragedy to illustrate unconscious desire; Lacan also used it to portray desire in its purist form, then Zizek revealed how it can be politically dangerous.

The “danger” in this production, however, is not actually the blood or vomit, but the mundanely apathetic manner the business of death and ruling are portrayed.

This truly is an illustration of what the political philosopher Hannah Arendt termed the banality of evil. The Leader is not an inhumane monster, just a woman who is very good at her job. The Leader is not a murdering psychopath, just a bureaucrat doing her duty. It is the political system itself that remains elusive and God-like, controlling everything, but never appearing precisely anywhere, not unlike the form of Greek tragedy.

It presents you with a seemingly neat binary, only to rip it apart and destroy it with ongoing critical questioning, all the while you are wondering, what was that?

Earlier this year, The Guardian reported that the Greek Prime Minister, Alexis Tsipras, justified taking any measure to save the Euro:

Because Greece is the country of Sophocles, who taught us with his Antigone that there are moments in which the supreme law is justice.

Sophocles also taught us to question supreme law as well as justice. Greek tragedy is a debate, not a recession that we have to have.