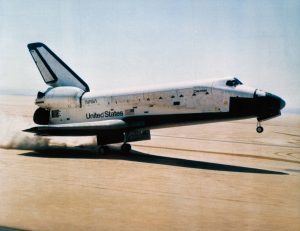 On April 14, 1981, the rear wheels of the space shuttle orbiter Columbia touched down on Rogers dry lake at Edwards Air Force Base, NASA’s Armstrong Flight Research Center (then Dryden Flight Research Center), in southern California, to successfully complete a stay in space of more than two days. Astronauts John W. Young, STS-1 commander, and Robert L. Crippen, pilot, were aboard the vehicle. The mission marked the first NASA flight to end with a wheeled landing and represented the beginning of a new age of spaceflight that would employ the same hardware repeatedly.

An area of the air base was set aside for public viewing of the landing, and crowds numbered well over 200,000 people, with some estimates as high as 300,000 visitors who flocked to the site. Media from around the world added to the throng, as radio and TV trucks of all shapes and sizes rolled in from everywhere.

James Young, Chief Historian of the Air Force Flight Test Center at Edwards AFB, remembered the landing well. “You just had to be there to hear, even feel, the double crack of the sonic boom,” Young said. “It was such a tremendous sense of excitement to see something never seen before, to witness such a historic event.”