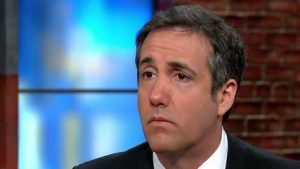 It just doesn’t get much richer this.  Trump lawyer and main surrogate Michael Cohen will not be able to vote for “the Donald” in the New York primary – because he’s a registered Democrat!

Cohen told CNN’s John Berman, “Do I personally, as a voter, as a supporter of Mr. Trump, believe that the process is rigged? I do. I think that the … establishment does not want Mr. Trump to be the nominee…Me, personally, I’m actually a registered Democrat. So I don’t really care about Reince Priebus.”

New York has a closed primary, which means that a person may only vote in the party’s primary with which the person is registered.

Well, Mr. Cohen, you can still vote in the Democratic primary – maybe “Feel the Bern” a bit.