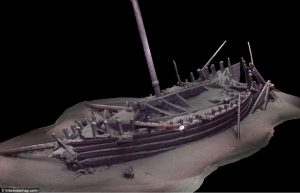 Preliminary photogrammetric model of Black Sea MAP’s final discovery of 2017. A Roman ship lying in over 2000m of water. Its mast still stands, both quarter rudders with their tillers are still attached and the yards lie on deck where they fell. Rope is still draped over the frames due to the extraordinary preservation of organic materials in the Black Sea’s anoxic conditions. The relatively slight damage at the bow and stern was sustained at the time of wrecking. Since then, nearly two thousand years ago, time has passed it by. Photo: Black Sea MAP

A perfectly preserved almost 2,000-year-old Roman ship is the most intriguing discovery from the third and final research season of the international Black Sea MAP underwater archaeology project – among a total of 20 other previously unknown ancient and medieval ships on the bottom of the Black Sea of Bulgaria’s coast.

Below 150 meters (app. 500 feet) the Black Sea’s water is anoxic, preventing the growth and development of organisms that feed on organic materials, such as wood and flesh.

In 2016, Black Sea M.A.P. made global headlines with the discovery of the world’s first ever well preserved sunken “round ship” (a cog), a medieval Mediterranean ship which was a precursor to the Age of Discovery vessels such as the ones on which Christopher Columbus crossed the Atlantic, in Bulgaria’s Black Sea zone.

They have also found that the Black Sea, formerly a fresh water lake, became saline and connected with the World Ocean at the end of the last Ice Age, from about 18,000 to about 12,000 years ago, rather than as a result of a hypothesized the Biblical and Noah’s Ark Deluge that supposedly occurred ca. 6,000-5,000 BC.

During its three field seasons, the Black Sea, not wholly unexpectedly, has unveiled 60 astonishingly well­‐preserved shipwrecks helping write the history of nearly 2,500 years of seafaring tradition, the organizers of Black Sea M.A.P. have announced.

The team of world-­renowned underwater archaeology scientists returned from their third and final field season in Bulgaria’s Black Sea zone to the port of Burgas.

“This assemblage of [well-preserved Black Sea shipwrecks] must comprise one of the finest underwater museums of ships and seafaring in the world,” the project’s Chief Investigator, Prof. Jon Adams from the University of Southampton, has said.

The expedition’s best “find” of 2017 is a Roman ship lying in over 2,000 meters of water, with its mast still standing, both quarter rudders with their tillers still attached and the yards lying on deck where they fell.

Rope is still draped over the frames due to the extraordinary preservation of organic materials in the Black Sea’s anoxic conditions. The relatively slight damage at the bow and stern was sustained at the time of wrecking. 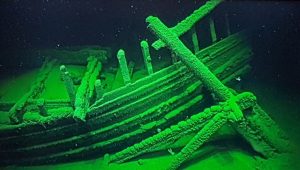 “We dived on one wreck, a merchant vessel of the Byzantine period dating to the 10th century. It lies at a depth of 93 meters that puts it into the diving range so we took the opportunity to visually inspect certain structural features first hand,” Adams explains.

“The condition of this wreck below the sediment is staggering, the structural timber looks as good as new,” he adds.

“This suggested far older wrecks must exist and indeed even in the few days since the dive we have discovered three wrecks considerably older, including one from the Hellenistic period and another that may be older still,” the maritime archaeologists elaborates.

In the course of the Black Sea MAP’s surveys, these wrecks have been unearthed using the latest robotic laser scanning, acoustic and photogrammetric techniques, the organizers point out.

This represents an unbroken pattern of trade and exchange, warfare and communication that conditions of the Black Sea (the lack of oxygen) below a certain depth, some of the wrecks survive in incredible condition.

“We have never seen anything like this before. This is history in the making unfolding before us,” says Dr. Krum Bachvarov, from the University of Connecticut and the National Institute and Museum of Archaeology in Sofia. 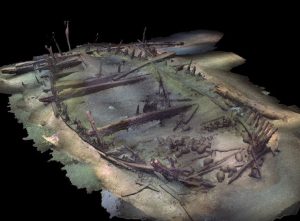 Black Sea MAP’s discovery of a late Roman ship on the Bulgarian shelf. Although the depth is relatively shallow, the wreck is extraordinarily well preserved. We see a cargo of amphorae in the bow, tiles from the ship’s galley and some of the crew’s cooking pots, a capstan (known from illustrations but never seen before) and rigging elements. One of the amphorae will be recovered for dating and further analysis. Photo: BlackS ea MAP

The earliest vessel found by Black Sea M.A.P. on the bottom off Bulgaria’s coast are from the Classical Antiquity period around the 4th–5th century BC, while others are from the Roman, Byzantine and Ottoman periods spanning two and a half millennia.

A testimony to the brief but tangible might of the Despotate in today’s Northeast Bulgaria and Southeast Romania has been the recent discovery of a 14th century nephrite amulet buckle made in China but with Mongol (Tatar) motifs.

The organizers of Black Sea M.A.P. point out that many of the 60 ancient and medieval shipwrecked vessels they have found off Bulgaria’s coast “show structural features, fittings and equipment that are only known from iconography or written description but never seen until now.”

“Our primary aims are focused on the later prehistory of the region and in particular on human response to major environmental change. We believe we now have an unparalleled archive of data with which to address these big questions about the human past,” explains Chief Investigator Jon Adams, who is Professor in Maritime Archaeology and Founding Director of the University of Southampton’s Center for Maritime Archaeology.

“Black Sea MAP now draws towards the end of its third season, acquiring more than 1300 kilometers (800 miles) of survey so far, recovering another 100 meters (880 feet) of sediment core samples and discovering over 20 new wreck sites, some dating to the Byzantine, Roman and Hellenistic periods,” Adams has added upon returning to the Port of Burgas in Bulgaria.

“During the third season of the Black Sea MAP we continued filling in the blanks of the mosaic of ancient seafaring with the discovery and documentation of outstandingly well preserved ships,” says Assist. Prof. Kalin Dimitrov from Bulgaria’s National Institute and Museum of Archaeology in Sofia, Director of the Center of Underwater Archaeology in Sozopol.

“The vessels represent the Roman and Byzantine periods, and the time of Ancient Greek colonization. The discovered shipwrecks will undoubtedly rewrite the history of ancient shipbuilding,” he elaborates.

“Some of the ships we discovered had only been seen on murals and mosaics until this moment,” Ed Parker, CEO of Black Sea M.A.P., has told The Daily Mail.

“There’s one medieval trading vessel where the towers on the bow and stern are pretty much still there. It’s as if you are looking at a ship in a movie, with ropes still on the deck and carvings in the wood,” he has added.

“When I saw that ship, the excitement really started to mount – what we have found is truly unrivalled,” Parker concludes.

For Andy Byatt, a key producer of the David Attenborough BBC series, “Blue Planet”, it has been a highly rewarding experience.

“I think we have all been blown away by the remarkable finds that Jon Adams and his team have made. The quality of the footage revealing this hidden world is absolutely unique,” Byatt says.

During both the 2016 and 2017 field season, Black Sea MAP has worked with Swedish based MMT & Reach Subsea, normally focused on surveying for the offshore industry.

The Black Sea MAP underwater archaeology project was conceived by Hans K. Rausing who established the Expedition and Education Foundation to commission the project.

The Foundation’s work is funded by The Julia and Hans Rausing Trust, a charitable fund, reflecting their interest in improving our understanding of the origins of humanity and human civilization in the region.