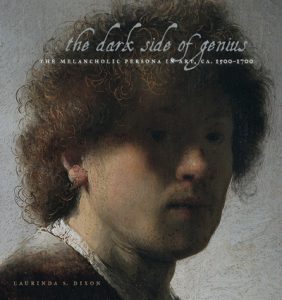 Today the word “melancholia” refers to a psychological condition. But medical authorities once maintained that there was no separation between mind and body in disease, and treated melancholia as both a mental and a physical disorder. The condition was blamed for a host of unsavory things, including mental depression, cholera, syphilis, witchcraft, and even murder. Criminals and sociopaths commonly succumbed, owing to the influence of the planet Saturn and an accumulation of black bile in the body.

Despite its negative connotations, melancholia eventually became associated with aristocrats, intellectuals, hermit-saints, and creative men of genius. Eventually, visual artists joined the privileged group. My book, The Dark Side of Genius: The Melancholic Persona in Art, ca. 1500-1700, documents the evolution of this concept, and examines how artists acknowledged and displayed the symptoms of melancholia in their own self-portraits.

Before the Enlightenment, our mental and physical identities were defined by ancient Greek humoral theory, which formed the core of university medical curricula for a thousand years. This paradigm accepted without question the fact that the condition of the outer body mirrored the state of the inner soul. All things in the universe were comprised of four qualities (hot, cold, wet, dry), which characterized four elements (fire, air, water, earth). These were represented in the human body by four humours, or bodily fluids (yellow bile, phlegm, blood, black bile). The qualities, elements and humours  were linked, in turn, to four temperaments (choleric, phlegmatic, sanguine, melancholic). Each temperament designated a human type, which embodied a specific combination of qualities, element, and humor. Astrological theory, a mainstay of Renaissance medicine, also designated planets a place in this system. Melancholics were related to cold, dry earth, black bile, and Saturn, which dominated the passage of time, sorrow, death, decay, and darkness.

Why would artists choose to emphasize their connection to such an ambivalent identity? The Renaissance philosopher/physician Marsilio Ficino revived the Aristotelian belief that the peculiar eccentricities of great and contemplative men – mood swings, depression, misanthropy, forgetfulness, and the like – marked them as melancholic. His theory attributed the psychic highs and lows of the condition to a sudden combustion of black bile in the body, the so-called “fire of inspiration.” This blaze instigated a frenzy of creative activity; but in its aftermath, the smoky remains of burned humors rose to the brain, polluting it and causing depression. Artists, who wished to be acknowledged as both artisans and intellectuals, took on the melancholic temperament as a mark of genius.

Medical descriptions of melancholia appear in all early modern medical texts. Many are beautifully illustrated, providing visual evidence of the effect of creative fires on the brain. The so-called “cell doctrine” of brain anatomy, illustrated in Hieronymus Brunschwig’s treatise on surgery, shows the thought process as shared among the cognitive powers of imagination, reason, and memory, located on the surface of the brain. 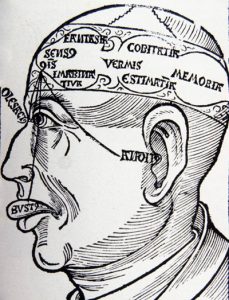 Visual images were formed and displayed to the imagination, or “mind’s eye, visualized literally in Robert Fludd’s treatise of 1619. However, the premodern understanding of imagination did not denote intellectual freedom and creativity, as it does today, but could also be associated with frustrating mental confinement. The purpose of imagination was not to interpret or embroider on the prosaic reality communicated to it by the five senses, but to integrate sensations into images and pass them along to the mid-brain. There reason, or “estimatia,” took over in the consideration and judgment of those images, filing them into memory for eventual retrieval. 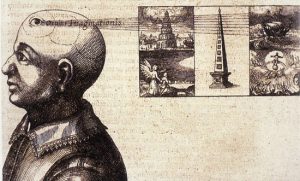 When the smoke of humoral fires interposed itself between the mind’s eye and the eyeball itself, as happened following moments of artistic inspiration, vision became literally clouded. The putrid fumes affected the mind’s eye directly, causing melancholics to perceive the world as congested with thick clouds of dark vapor. Artists were especially prone to disordered imaginations, for their reliance on that part of the brain caused it to become more easily exhausted, and therefore vulnerable to the effects of melancholia. Rembrandt created several self-portraits in which he obscured his eyes, and sometimes his entire face, with shadow. By veiling himself in darkness, he allows us to share his privileged view of the world, seen through his own infected, exhausted imagination, literally clouded by the sooty dregs of inspiration.

By depicting themselves as melancholics, artists created and defined a new elite identity, in which their self-worth did not depend on noble blood or material wealth, but rather on talent and intellect. Their self-portraits reveal that melancholia eventually became a disease of fashion, associated with quirky brilliance, bold imagination, and shady glamour. Today the melancholic persona persists as an embodiment of withdrawn, introverted genius. But who among us has never felt “in the dumps,” “in a bad humor,” or “feeling blue”? These common phrases are inherited from a medical tradition in which melancholia defined the sufferer as both miserable and privileged.