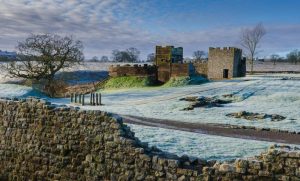 Frosty temperatures at Vindolanda in winter 2014. / Photo by the Vindolanda Trust, Creative Commons

By Dr. Peter Kruschwitz / 05.08.2014
From The Petrified Muse
Professor of Classics
Fellow of the Pontifical Academy for Latin (Pontificia Academia Latinitatis)
University of Reading

An inscription which has long fired my imagination is a fragmentary piece from Habitancum/Risingham in Northumberland, situated a few miles north of Hadrian’s Wall.

Its find context makes this piece Britain’s – and in fact Ancient Rome’s – northernmost (half-)surviving poem of the Roman period, and its content certainly lives up to any expectations that may come with that.

The inscription – engraved on a funerary altar that was subsequently cut in half lengthways, with only its right half surviving – reads as follows (CIL VII 1020 cf. p. 312 = RIB 1253 = Undying Voices no. 20):

The poem, or so it would appear from its scarce remnants, referred to frosty conditions twice, once through the adjective gelidus (line 3–4), and then again by means of the noun pruina (line 4).

The presence of pruina (‘frost’) makes it exceptionally unlikely that the poet was talking about anything else than actual climate conditions: it would be rather out of place to use this specific word in the context of the underworld or death or some such, and wherever else it appears  in the Latin inscriptions, pruina always refers to actual places (cf. AE 1991.408; ICERV 349).

Chances are that Flaminius …nsa – a foreigner to Britain and soldier, most likely – complained about the constantly cold (semper!) weather north of Hadrian’s Wall during his life time to such an extent that his concerns even found their way into his commemorative inscription: why else would this matter be mentioned at all!

Or should one go even further and consider that he died of a cold, pneumonia, or hypothermia? Reports of Roman soldiers who froze to death  are certainly attested in the ancient sources, if related to other geographical contexts of the Roman empire – note, for example, Tacitus’ famous description of the hardship endured by Roman soldiers under Corbulo‘s command (Tac. Ann. 13.35):

The entire army was kept under canvas,notwithstanding a winter of such severity that the ice-covered ground had to be dug up before it would receive tents. As a result of the bitter cold, many of the men had frost-bitten limbs, and a few died on sentinel-duty. The case was observed of a soldier, carrying a bundle of firewood, whose hands had frozen till they adhered to his load and dropped off from the stumps.

Since I gave my paper (though presumably unrelated to it), a wave of winterly frost has hit Britain: in fact, some regions have already experienced this winter’s first snow, and this made me wonder: to what extent was cold weather, in fact, an issue Roman sources addressed – if potentially in rather less poetic ways than the Habitancum tombstone, above?

Remarkably, Tacitus, in his treatise Agricola, does not appear to see much of a problem with frost in Britain at all when he writes that (Tac. Agr. 12.3–4; translation from here) –

The sky in this country is deformed by clouds and frequent rains; but the cold is never extremely rigorous. The length of the days greatly exceeds that in our part of the world. The nights are bright, and, at the extremity of the island, so short, that the close and return of day is scarcely distinguished by a perceptible interval.  It is even asserted that, when clouds do not intervene, the splendor of the sun is visible during the whole night, and that it does not appear to rise and set, but to move across. The cause of this is, that the extreme and flat parts of the earth, casting a low shadow, do not throw up the darkness, and so night falls beneath the sky and the stars. 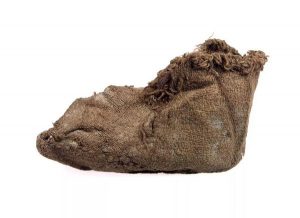 A child’s sock from Vindolanda. / The Vindolanda Trust, Creative Commons

Even though Tacitus clearly refers to the northernmost regions of Britain in particular in this description, he suggests that temperatures never really drop to excessive levels of cold – an observation that Flaminius …nsa may have disagreed with rather fervently.

At Vindolanda, situated a mere 20 miles southwest of Habitancum, a more realistic view on matters appears to have prevailed as well.

There are two pieces in particular that are of interest in this context, illustrating aspects of the immediate impact (and the potential level of disruption) caused by adverse weather conditions at Rome’s northernmost frontier.

First, in a letter written by Octavius (an entrepreneur) to one Candidus, Octavius proves reluctant to get traveling during adverse road (and thus presumably: weather) conditions, mindful of the hazards that this would pose to his draught animals (Tab. Vindol. 343.19–21):

I would have already been to collect them except that I did not wish to be cruel to (or: injure) the draught animals while the roads are bad.

The letter does not contain a calendar date for us to establish a clearer understanding of the specific circumstances.

This is different in the second case, a (fragmentary) draft letter of Flavius Cerialis’ (i. e. the prefect of the ninth cohort of Batavians at Vindolanda), in which he speaks of his efforts of winterproofing the outfit (Tab. Vindol. 234):

Flavius Cerialis to his September, greetings. Tomorrow, which is 5 October, as you wish my lord, I will provide some goods (?) … by means of which (?) we may endure the storms even if they are troublesome.

Several scholars have argued that the correction of et hiem (crossed out by the scribe) to etiam (written above the original writing) was a scribal mistake due to an original mishearing of a dictated text.

This is extremely unlikely, however: not only is there a significant discrepancy between et hiem(em?) and etiam in terms of the vowels (and, to a lesser degree, the presence/absence of aspiration in hiem… vs. et-iam), but also an altogether different spread of word accents (èt híemem vs. étiam).

A significantly more plausible scenario is that the author of these lines, Cerialis, reconsidered his original version as he went along and made a correction along the lines that now survive. 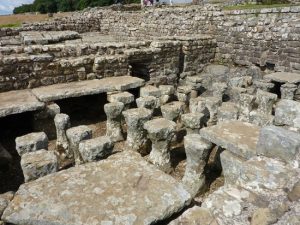 At Vindolanda, average temperatures in October range from 4.5–11ºC, a significant drop vis-à-vis the conditions in September these days (and clearly marking the approach of much lower winter temperatures), and chances are that this was not fundamentally different during the Roman period. In other words, in early October winter, with its storms, increased precipitation, and lack of sunshine, will have been very much on the prefect’s mind, and it is too easy to blame the evidence for a correction of et hiem on a mishearing scribe.

The point of Cerialis’ letter, however fragmentary in context, is clear: time to prepare for the inclemencies of weather during the winter months (tempestates), so that they may become bearable (qui feramus) even if unfavourable (etiam si molestae sint). This ties in, of course, with other letters discussing items of clothing and such (as well as archaeological evidence for soldiers’ clothing, heating arrangements, etc.).

With winter fast approaching in Britain, it is time to consider – as every year – what we may be able do to help those who still, quite literally, feel the chill: rough sleepers, the elderly and vulnerable, and – sadly – the ever-increasing numbers of refugees seeking shelter:

so they may endure the (sc. winterly) storms even if they are troublesome.