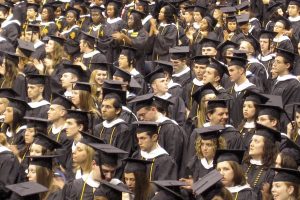 Students at Graduation/ Photo by Kit from Pittsburgh, Creative Commons 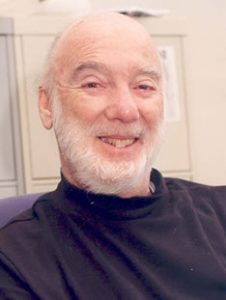 I grew up in a tough, working class neighborhood in Brooklyn. My parents had both come to the US in the early 1920s (just before the immigration restriction laws of 1924). My father did piecework in a factory that made men’s caps. My mother was a housewife. They had both dropped out of school after the 8th grade. There were no books in our apartment except those loaned for schoolwork by the New York City Public Schools.

Like most teenagers, I didn’t take high school very seriously and was unsure about what to do after graduation. At the beginning of my junior year my adviser asked me if I planned to go to college. I told him that it all depended on whether I could get into the City University —which was free. He urged me to work very hard in my junior and senior years to raise my average.

Fortunately I did; the required grade point average for admission that year was 82 and I squeezed by with an 82.3. I entered Queens College in 1957. I was, however, irritated to learn that my Freshman and Sophomore years would be entirely filled by required general education courses in writing and literature, math and science, foreign language, art and music, and U.S. and world history. I had taken for granted, as did my parents, that I would pursue either medicine or law and did not understand the reason for two years of apparently extraneous requirements.

And, initially, things did not go very well. My first English writing assignment, from Professor Norman Silverstein, was to pick a word from a list on the blackboard (I chose the word “cancer”), look up the word in the Oxford English Dictionary, and then write a 1,000 word essay on the derivation and evolution of the word. When he returned the essay, the grade was ‘F’ and he urged me to come to his office the next day. I was so disheartened that I told my parents that I didn’t think I could cope with college-level work. However, Professor Silverstein patiently showed me how to rewrite each sentence. We met several times and he gave me at least 2-3 hours of personal attention. I then had to do the assignment over again and the second try resulted in a C. He then met with me for additional rewriting sessions. By the end of the course my writing had improved enough to receive an A.

Luckily, I also enrolled in an introductory literature section taught by a dynamic young instructor named Lillian Feder. She opened my eyes to the world of books and scholarship. Professor Feder’s skill in bringing literature to life, from Greek drama, through Shakespeare, had an enormous impact on my imagination. In the second semester, she asked the class to choose either reading short excerpts from many authors over several centuries or reading the entire corpus of the writings of Albert Camus (covering about 20 years). We chose the latter and that course turned out to be one of the most memorable of my undergraduate years.

I took introductory history courses with Professor Richard Emery, whose lectures in ancient and medieval history (without any notes—something I have never been able to duplicate) were absolutely riveting. (Professor Emery later provided me with invaluable help in successfully applying for graduate school in history, resulting in a scholarship from Harvard University.)

In addition, the freshman music course required students to attend a performance of Handel’s Messiah, which, after hearing it for the first time, became an annual favorite. (That evening was also my first date with the girl who has been my wife for more than 50 years.) Finally, the art history survey required students to do a paper on a work of art at the Metropolitan Museum (which I had never visited). I chose a piece from Old Kingdom Egypt, thus initiating a life-long fascination with the history and culture of that ancient civilization.

The two years of general education courses culminated in a required Pass/Fail Language, Literature and Arts Exam, in which I received “Pass+”— something that would have been unthinkable just two years before.

I often wonder how different my subsequent quality of life would have been if I had gone to college in today’s setting, when general education has been largely abandoned and students flit from studies course to studies course, rarely if ever exposed to a common core of knowledge. Recent surveys, for example, reveal that of the nation’s “top liberal arts colleges,” only one has a general education requirement in history; and, the “vast majority” of English majors at “the most prestigious American colleges and universities” are no longer required to take a course on Shakespeare.

More than ten years ago I made a belated effort to locate and thank the professors who had changed the course of my life during those two years of general education. Sadly, but not surprisingly, they were no longer living. I had unthinkingly waited far too long to contact them. This brief essay serves, in a very small way, to try to make up for that oversight.