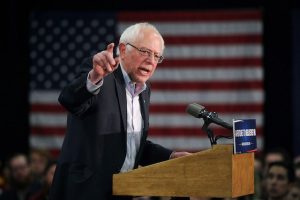 Point the way to the revolution, Bernie

Favored at nearly 15 points heading into the Oregon primary tonight, Sen. Sanders has claimed a numeric victory directly on the heels of near-draw in Kentucky that was really a victory in itself (see previous article).

The Associated Press called the primary in the Beaver State with Sanders leading 53% to Clinton’s 47% with 60% of precincts reporting as of this writing.

The media pundits have been busy calling Clinton’s razor-thin Kentucky victory some massive moment for her as they did with the same practical draw in Iowa.  In fact, Wolf Blitzer of CNN used exactly the words as he did then, “A win’s a win.”

In Kentucky, Sanders and Clinton each receive 25 pledged delegates.  The “victory” in that state easily goes to Sanders for image alone after toppling Clinton as the long-standing Democratic primary candidates in that state.

Oregon is a different story, and he pulled off the added numeric victory here that was necessary.  The pundits are also busy explaining this one away, as with the long string of victories behind him now, “insignificant” and other such nonsense.

Oregon is a decidedly blue state in general elections, and Clinton lost that state to then-Senator Obama in the 2008 Democratic primary.

And here again is where the victory for Sanders is more telling.  Clinton has won most of the Southern states – those that always go red in general elections.  But blue states such as Oregon, Sanders has beaten her quite well on this turf time and again.

They want a political revolution.