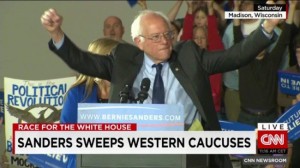 A full revolution may not be occuring now in U.S. politics — but change most assuredly is. The venerable Christian Science Monitor (a great paper I wrote extensively for from India and Spain in the mid to late 1970s) notes in a must-read-in-full-piece by Mark Sappenfield that this election has brought some changes. And it’s easy to say no matter what the nomination and election outcomes are this year, American politics will not remain the same:

In the wake of Bernie Sanders’s three resounding victories Saturday, the political media could be forgiven for asking: When will this all end?

At some point, the presidential campaign has to reenter political reality. Right?

Actually, maybe not.
True, Hillary Clinton’s path to the Democratic nomination still seems mathematically iron-clad, but when you lose three caucuses all by at least 40 points – as Mrs. Clinton did Saturday – you’re hardly barreling through the checkered flag at full speed.

Aside from the matter of electing a president, Election 2016 is becoming a crucible for modern politics unlike any other for at least a generation. With the ascendance of Sanders, Mr. Trump, and Ted Cruz, the question can honestly be asked: Is American politics entering a new era?

It’s worth to look at this piece in considerable detail.

Firstly, there is the philosophical (almost trite) question: what is reality?

In politics, “reality” is often the conventional wisdom — predictions or assertions made by seemingly smug, self-assured new and old media pundits that x, y and z, will happen or never happen. (Read my satirical take on the conventional wisdom in a 2011 Cagle Cartoons column HERE.) The conventional wisdom, aka perceived reality, is operational — until it’s wrong, and then it isn’t. Then it’s quietly swept under the rug and new conventional wisdoms or realities by seemingly smug, self-assured new and old media pundits emerge. One that is starting to crumble but still out there: why, Donald Trump can NEVER be elected if he gets the nomination and thus redefine the GOP and put his stamp on the federal government (which is why some GOPers say they won’t vote or will vote third party and why some Sanders followers are talking about never voting for Clinton because she’s apparently to them Donald Trump or George W. Bush in a skirt). MORE:

0n one hand, there is the Goldwater argument. Every so often, the thinking goes, parties become so captive to their bases that they have to go through a seismic shift, backing an unelectable ideologue before snapping back to the more-moderate middle. The Republicans’ nomination of Barry Goldwater in 1964 was one such example.

But are both parties flirting with Goldwater moments in the same election?

Instead, there are signs that something deeper might be at work. The Sanders and Trump movements – though radically different in policy prescriptions – are built on strikingly similar foundations: White voters who feel that American politics has been hijacked by elites. And there’s little to indicate that their frustrations will be washed away by a single sacrifice on the altar of presidential hyperpartisanship.

Politics’ great salve is the economy, as an adviser to Clinton’s husband once preached, saying, “It’s the economy, stupid.” But the economy already is doing better – just not for everyday Americans.

That makes what happens next, to no small degree, a step into the unknown. So far, the levers Washington has pulled after the Great Recession have not significantly helped the middle class. Meanwhile, parties’ control over their voters is declining as proliferating media sources allow them to build their own ideology.

Key questions are a)is the beginning of a major realignment of parties, where all bets, conventional wisdom and even some assumptions and data by political science don’t mean that much? b)even if the Sanders forces lose or Trump forces lose, does that mean they lose in the long term — or are they, in fact, indicative of major trending as the U.S. heads into a increasingly confrontational 21st century?
And then there’s this:

“Over time, unresolved issues, problems, tensions and unmet expectations build up,… until they reach a point when another realigning election occurs to begin dealing with the backlog of unmet needs,” he writes.

But since 1968. divided rule has been the norm, Mr. Rosenberg argues….In other words, America has a pent-up demand for the action that only one-party rule can deliver.

Trump and Sanders, in particular, are creating a powerful new voting bloc that is redefining politics in ways that don’t fit neatly into a single party’s orthodoxy.

“Trump and Sanders are, in very different ways, threatening the old order,” writes William Grieder of The Nation. “Both are shining bright lights, in contrast to shallow, stalemated two-party politics. Donald and Bernie, separately, or together, possess serious potential to alter the landscape of two-party politics by redefining constituencies and convictions, transforming the content and character of one or both parties.”

“The great question for 2016 is whether either party can begin to bridge the gaps and unite these working-class islands of discontent,” he adds.

And then the question becomes: if a party does this, will the final results in terms of governance be something that strengthens American democracy or becomes another body blow that seemingly weakens it?

The answers will be more evident in November and beyond.