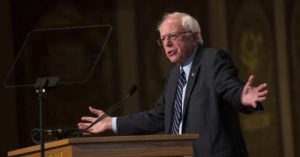 Introducing the amendment on Wednesday, Sen. Bernie Sanders asked his senate colleagues if they “have the guts finally to stand up to the pharmaceutical industry and their lobbyists and their campaign contributions and fight for the American consumer?” (Photo: Kevin Dietsch/UPI)

Sen. Cory Booker and others draw sharp rebuke from observers, who pointed out that many who voted “no” receive substantial contributions from the pharmaceutical industry.

While the Republican Party is publicly dismantling millions of Americans’ health safety net, more than a dozen Democrats late Wednesday quietly threw their weight behind Big Pharma and voted down an amendment that would have allowed pharmacists to import identical—but much less expensive—drugs from Canada and other countries.

The “power and wealth of the pharmaceutical industry and their 1,300 lobbyists and unlimited sums of money have bought the United States Congress,” Sen. Bernie Sanders (I-Vt.) declared in a speech on the Senate floor while introducing the amendment, co-sponsored by Sen. Amy Klobuchar (D-Minn.), which would have been attached to the chamber’s budget resolution. It came amid a flurry of legislative activity during Wednesday evening’s “vote-a-rama.”

“Year after year the same old takes place: the pharmaceutical industry makes more and more money and the American people pay higher ad higher prices,” Sanders continued, asking his colleagues if they “have the guts finally to stand up to the pharmaceutical industry and their lobbyists and their campaign contributions and fight for the American consumer?”

It turns out, no.

In fact, 13 Democrats voted against the measure (roll call here), siding with the Republican majority and drawing sharp rebuke from observers, who pointed out that many who voted “no” receive substantial contributions from the pharmaceutical industry.

Many were particularly dismayed that Sen. Cory Booker (D-N.J.) had sided with Big Pharma after winning liberal praise for his unprecedented testimony against Attorney General nominee Sen. Jeff Sessions (R-Ala.). Notably, 12 Republicans and two Independents, including Sanders, voted for the measure.

Seventy-two percent of Americans support such a rule, according to Sanders, who noted that the price differences between the U.S. and Canada are “dramatic.”

“EpiPen, for example, costs more than $600 in the United States compared to $290 in Canada for the exact same allergy treatment,” a press statement from Sanders’ office observed. “A popular drug for high cholesterol, Crestor, costs $730 in the U.S. but $160 across the northern border. Abilify, a drug to treat depression, is more than $2,636 for a 90-day supply in the U.S. but only $436 in Canada.”

Sanders’ attempt to attach such a provision to the 21st Century Cures Act last month was similarly blocked.

Should the import rule have passed, it would have been a step towards ending “the epidemic of price gouging,” Sanders said, which has become a hot-button issue for many Americans who are unable to afford their prescription drugs—a point the former presidential candidate hammered home on Twitter ahead of the vote.