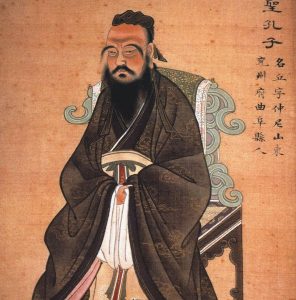 This great ethical and philosophical system is named after its founder, K’ung Fu‑tzu (or Master K’ung), an ethical philosopher of the late sixth and early fifth centuries B.C.E. whose Chinese name was later latinized to Confucius by Jesuit missionaries. This form became the convention in most western languages, and accordingly we shall refer to him by this westernized name. He is reputed to have written (or at least compiled and edited) a number of books, but the best‑known of these is the “analects” (Lun Yü), a collection of his sayings.

It is debatable whether the system he founded should be called a religion. While it prescribes a great deal of ritual, little of it could be construed as worship or meditation in a formal sense ‑ this function was fulfilled by the “. . . practitioners of the ancient magico‑religious system, exorcists and shaman‑diviners . . . ” (Smith 1973:111) or, as Blofeld (1979:90) calls it, “. . . the ancient folk religion that never achieved a name of its own”.

Confucius occasionally made statements about the existence of other‑worldly beings that sound distinctly agnostic and humanistic to our ears. The Confucian traditions has its temples and officiants, but no “philosophy of nature or of the cosmos” (Smith 1973:60). However, its inclusion in this course is justified by the fact that its effect on Chinese society and culture was very deep and parallels the effects of religious movements seen in other cultures. Also, one should guard against too narrow a definition of religion. Those who follow the teachings of Confucius are comforted by it; it makes their lives more complete and their sufferings bearable ‑ who are we to deny them the title of religious people? Finally, consider the fact that religions in Chinese culture are not mutually exclusive entities ‑ each tradition was free to find its specific niche, its field of specialisation.

And Confucianism specialised in ethics, in the orderly arrangement of society and correct relationships between people. Confucius himself lived in an era (The Eastern Chou dynasty) when China was divided into a number of small states each ruled by a warlord or nobleman who paid little more than lip service to the emperor who in theory still ruled the Middle Kingdom (China) from the capital, Loyang. The frequent wars between these states disrupted the structure of society. As a result, there was a deeply felt need for a theory of society that would act as a cohesive factor and that could reunite the Chinese nation. A number of philosophies (e.g. Mohism and Legalism) arose to fulfil this need ‑ that of Confucius was eventually the most successful.

(a) Li ‑ ritual. This originally meant “to sacrifice”. From this initial religious ceremonial meaning, the term was soon extended to include secular ceremonial behaviour, and then took on an even more diffuse meaning, that of propriety or politeness which coloured everyday life. Rites were codified and treated as an all‑embracing system of norms. Confucius himself tried to revive the etiquette of earlier dynasties, but in later Confucian tradition, he himself was regarded as the great authority on ritual behaviour.

(b) Hsiao‑ filial piety. This was considered among the greatest of virtues, and had to be shown towards both the living and the dead. The term “filial” means “of a son” and therefore denotes the respect and obedience which a son should show to his parents (traditionally, especially to his father). But this relationship was extended by analogy to a series of five relationships: those between father and son, ruler and subject, husband and wife, elder brother and younger brother, and that between friends. Specific duties were prescribed between each of the participants in these sets of relationships. Such duties were also extended to the dead, and this led to the veneration of ancestors, to which the living stood as sons to their fathers. At this point we can see hsiao almost imperceptibly fading into li, for example the precise regulations on the length and manner of mourning on the death of a family member. In time, filial piety was also built into the legal system: a criminal would be punished more harshly if the culprit had committed the crime against a parent, while fathers exercised enormous power over their children. Much the same was true of the other three unequal relationships.

Some scholars doubt that filial piety figured so largely in the thinking of Confucius himself. Dawson (1981:47), for instance, points out that it is “rarely mentioned in the Analects, which may not be part of the oldest stratum of the work”. He contends that the main source of our knowledge of the importance of filial piety is The Book of Filial Piety, a work which is attributed to Confucius, but was almost certainly written only in the third century BCE. Nevertheless, filial piety has played a central role in Confucian thinking ever since, and continues to do so.

(c) Chung‑ loyalty. This was the equivalent of filial piety on a different plane, that of the relationship between ruler and minister. It was particularly relevant for the social class to which most of Confucius’s students belonged, because the only way for an ambitious young scholar to make his way in the world was to enter the civil service of a ruler. Like filial piety, loyalty was often subverted by the autocratic regimes of China. Confucius had advocated a sensitivity to the realpolitik of the class relations that existed in his time ‑ he did not propose that “might makes right”, but that a superior who had received “the mandate of heaven” (see below) should be obeyed because of his moral rectitude. But this was soon reinterpreted and became a doctrine which demanded blind, unquestioning obedience to the ruler from the ruled. Confucius would never have supported this ‑ he was far too subtle a thinker for that. “In the Analects, chung certainly means `doing one’s best for’ rather than blind obedience to the dictates of one’s superiors” (Dawson 1981:51).

(d) Jen‑ humaneness. Confucius was concerned about people’s individual development, but he maintained that this could not be done except in relation to others. Ritual and filial piety are the ways in which one should act towards these others, but the underlying attitude is one of humaneness. Unlike ritual, it is not the kind of thing which can be easily defined or identified in a particular person. Perhaps it is best expressed in the Confucian version of the Golden Rule, which they always phrased in the negative: do not do to others what you would not like them to do to you.

Jen also has a political dimension, since if the ruler lacks it, it will hardly be possible for the subjects to behave humanely. This, in fact, is the basis of the entire Confucian political theory: it presupposes an autocratic ruler, who is then exhorted to refrain from acting inhumanely towards the subjects. An inhumane ruler runs the risk of losing the “mandate of heaven”, that is, the right to rule. Such a mandate‑less ruler need not be obeyed. But a ruler who reigns humanely and takes care of the people is to be obeyed strictly, for the very fact of this benevolent dominion shows that the ruler has been mandated by heaven. Heaven (Shang Ti or T’ien) itself a vague concept of an impersonal superior reality, much as we might say, “Heaven help us” (although some scholars interpret the concept theistically). Confucius himself has little to say on the will of the people, but his leading follower Mencius (Meng Tzu) did state on one occasion that the people’s opinion on certain weighty matters should be polled.

(e) Chün‑tzu‑ the gentleman. The gentleman is the ideal towards which all Confucians strive (in modern times, the masculine bias in Confucianism has weakened, but the same term is still used). The term literally means “son of a ruler”, and there was a class‑based elitism inherent in the gentleman concept, but besides this, gentlemen were also expected to act as moral guides to the rest of society. Gentlemen are those who cultivate themselves morally, who participate in the correct performance of the rites, who show filial piety and loyalty where these are due and who have cultivated humaneness. The great exemplar of the gentleman is Confucius himself. It is indeed one of the great tragedies of his life that he was never awarded the high official position which he desired all his life, and from which he wished to demonstrate the general well‑being that would ensue if humane persons ruled and administered the state. 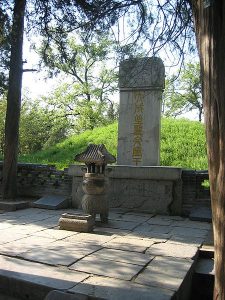 The tomb of Confucius. / Wikimedia Commons

Between the gentlemen and the “small people” (hsiao jen) was an intermediate class called the shih, commonly translated as “knights” who filled minor administrative posts and served as junior officers in the army. To these, too, Confucius and his disciples recommended the same virtues prescribed for the gentlemen. In time, the shih were transformed into a class of scholars and bureaucrats who owed their positions to the official civil service examinations. Since these were entirely based on verbatim knowledge of Confucius’s books, these people became the staunchest supporters of Confucian orthodoxy.

Confucius considered himself to be little more than a aspirant gentleman; he refused to be addressed as a sage. No doubt he would have been horrified to discover that in the centuries after his death, his stature increased to the point where he was eventually acknowledged to be a god, and was accordingly worshipped in the state cult. This worship ended with the Maoist revolution, but observers has noted that the Chinese version of Marxism itself displays distinctive traces of Confucian influence. Another development was neo‑Confucianism, which developed in the eleventh century CE as an attempt by Confucian scholars to answer questions raised by Buddhist metaphysics. Confucianism also had a remarkable influence on neighbouring countries such as Korea, Japan and Vietnam.