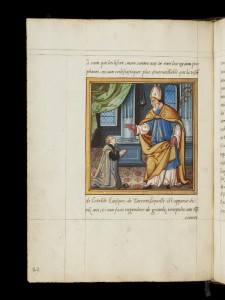 Many bishops in medieval England possessed medical knowledge, but that did not mean that such knowledge was always viewed as a desirable quality in a bishop. In 1114, King Henry I of England decided that Faritius, abbot of Abingdon, should be the next archbishop of Canterbury. As head of a large Benedictine abbey, Faritius was a plausible candidate – but he was also a controversial choice, having enjoyed a parallel career as physician to Henry’s first wife. Whilst his double life had earned Faritius royal favour, it was viewed with suspicion by some of his contemporaries. Several bishops allegedly protested that a man who inspected women’s urine was unfit to hold England’s highest ecclesiastical office.

This story has often been cited as evidence that religion and medicine were at odds in the Middle Ages, and that medical knowledge and experience were unnecessary, even undesirable, in a churchman. Faritius did not become archbishop, but it is worth remembering that there were other, strong political reasons for his rejection. Moreover, certain physicians were promoted as bishops in England during the subsequent four centuries, including Nicholas Farnham (Henry III’s physician, appointed bishop of Durham in 1241) and John Arundel (Henry VI’s physician for over a decade, and bishop of Chichester from 1459).

If physician-bishops were still a relatively rare phenomenon, bishops with medical interests were rather more common. Post-mortem inventories give details of bishops’ book collections, many of which contained medical texts. Ralph Baldock, bishop of London (d. 1313) owned 126 books: most were volumes of theology and canon law, but several were medical, including works by Aristotle and Giles of Rome. William Rede of Chichester (d. 1385) bequeathed a small collection of (mostly Salernitan) medical works to New College, Oxford. Several bishops owned Bartholomaeus Anglicus’ ‘De proprietatibus rerum’, an encyclopaedia with substantial medical content, and Monica Green has established that at least three late medieval bishops owned a copy of the ‘Trotula’, the key medieval text on women’s medicine (on the ‘Trotula’, see Monica Green’s earlier post). 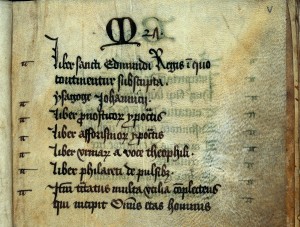 Table of contents in a manuscript held by the medieval abbey of Bury St Edmunds, including the Articella, a key text of medical learning. MS. 801a (12th–14th centuries), folio Vr. Wellcome Images L0024511.

Whilst book ownership suggests medical interests, writings produced by bishops themselves can firmly demonstrate medical knowledge. Robert Grosseteste, bishop of Lincoln (d. 1253) was one of the finest intellectuals of his age, and his vast output includes passages which suggest both knowledge and understanding of contemporary medical theory. In one of his sermons he compares faith and love to veins and nerves, the means by which health and vigour are transmitted from the head (Christ) to the hand (all believers). In another sermon he quotes Hippocrates’ ‘Aphorisms’, when discussing old age and fasting. His commentary on Psalm 59.5 describes the effects of wine on the body:

Good wine gives nourishment and health to the body; it clarifies the blood and opens the veins and purifies them; it expels the dark melancholy generated from the heart; it makes the soul forget its gloom and gives it joy and comfort; it gives the soul a happy boldness in undertaking subtle and difficult enquiries.

Grosseteste’s learning was undoubtedly atypical, but he believed that all clergymen needed at least a little medical knowledge in order to perform their role effectively. His ‘Templum Dei’ states that, before assigning a penance, a priest should identify the penitent’s humoral complexion (as choleric, sanguine or melancholic). His suggestion was echoed by other English bishops. Walter Cantilupe of Worcester’s synodal statues (1240, and reissued by Peter Quinel of Exeter in 1287) enjoined the priest to take account of the penitent’s complexion, as well as his or her general state of health. The confessor ‘should consider these things and, using his discretion, adjust the quality or quantity of the prescribed penance based on them.’ In the mid-14th century, Bishop Hamo of Rochester assigned a set of books for the use of those who heard confessions within his diocese. One of the volumes was ‘Avicenna on the counsel of medicine.’

Episcopal registers also provide evidence that bishops needed at least a basic grounding in medical theory. One of their duties was the management of the clergy, including sick, elderly or mad parish priests. Often, the bishop’s role in such cases was limited to appointing a temporary replacement, and making financial provision for the incapacitated cleric. Occasionally, however, the registers record a case in which a bishop seems to have used his medical knowledge to find a more appropriate solution to the problem. For example, in September 1326 John Stratford, bishop of Winchester dealt with the case of Walter of Corfe, vicar of Portsmouth:

Because of the infirmity from which he suffers more than usual due to the inclement air close to the sea, and out of paternal compassion, he grants a faculty for him to retire twice in the present year to his place of birth for purposes of recreation and for the sake of his health …

Stratford’s judgement demonstrates an awareness not only of the impact of air (one of the six non-naturals, physical, environmental and emotional factors that were understood to cause or prevent disease) on human health, but also of the ways in which individual complexion could make one susceptible to particular conditions. His remedy was one which would surely have met with the approval of early 14th century physicians.

John Stratford’s arrangements for Walter of Corfe confirm that bishops could be very much in touch with contemporary medical thinking. Further research will provide a comprehensive assessment of bishops’ medical learning, but this initial survey suggests that, despite the outcome of Faritius’ story, episcopal medical knowledge was both valuable and valued.

Dr Katherine Harvey (@keharvey2013) is a Wellcome Trust Research Fellow at Birkbeck, University of London, researching ‘Medicine and the bishop in medieval England, c. 1100–c. 1400’. Her book, ‘Episcopal appointments in England c. 1214–1344: from episcopal election to papal provision’, was published by Ashgate in 2014.

Giles Gasper, ‘“A doctor in the house”? The context for Anselm of Canterbury’s interest in medicine with reference to a probable case of malaria’, Journal of Medieval History, 30 (2004), 245–61.

Angela Montford, Health, sickness, medicine and the friars in the thirteenth and fourteenth centuries (Aldershot: Ashgate, 2004).