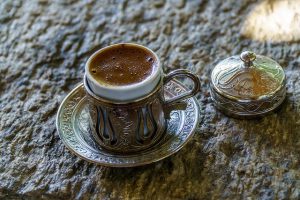 Turkish coffee brewing is an intriguing and special method of making coffee that goes back to the 16th century, predating almost every other currently-used method of brewing a cup of java.

It’s also surprisingly easy to do. Your biggest expense is a good grinder – a decent electric burr grinder that can grind extra fine (finer than espresso even) is needed; alternatively, there are “turkish mills” around, including an excellent model by Zassenhaus can be had, sometimes for much less.

Besides the grinder, you need good quality water, good quality, fresh roasted coffee, a stirring spoon made of metal, and a device called an ibrik also called a cezve. This is the brewer. It is usually made of copper, with a long wooden handle, though sometimes it is made out of steel or other metals. The pot has a wide base and a narrow top, with a spout on one or two sides for pouring. Ibriks can be found in a variety of sizes from 2 cup on up to 6 or 8 cups. Note, a “cup” is the size of a large espresso cup – about 3ounces, or 90mls per serving, or less.

And it’s important to note the “cup size” of the pot is not matched to how much is brewed if full – in fact, there needs to be a good amount of airspace in the pot while brewing, but not too much. The process involves foaming up the liquid in stages, and if you use a pot that’s too big, too much of the foam sticks to the sides and can contribute to many bitters in the cup.

Oh, and you need a heat source. For our visuals, we’re using a butane powered heating element – very suited for brewing an ibrik, though an electric or gas stove will do fine as well.

When done right, (and it’s not hard to do right), the coffee is very intense, but very pleasing to the tongue. It also breaks one of the cardinal rules we usually have for coffee – don’t boil (and reboil) the brew. But as you’ll see, it’s all good!

This is extremely important advice: never take your eye off the process when brewing turkish coffee. Things can happen in a blink of the eye – and you’ll create a big mess on your stove if you lose attion. But it is very easy to do.

If you really want to go authentic, or want to tone down the strength and intensity of the brew, adding spices such as cardamom, anise, or a sweetener such as an easily dissolvable sugar can be added. In fact, sugar is almost considered part of the process. The famous old proverb, “Coffee should be as black as hell, as strong as death, and as sweet as love” refers to turkish coffee, and you’ll note the sweet part 😉

Now before we get into this further, check out two recent tutorials and references to Turkish coffee – Wikipedia has a great one, and the Turkey Travel Planner has a good and brief how to as well. And in our tutorial below, you’ll note that in this demonstration, we’re stirring at the third and final removal of the ibrik – this is because it delivers a cleaner finished cup. Many purists however would never stir the ibrik while it’s brewing, in order to preserve the foam, and ensure each cup gets a bit of foam. It’s your choice as to how you want to do it – experiment! 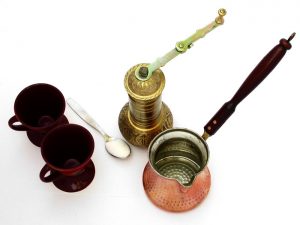 The basics
You don’t need much to brew Turkish coffee – a turkish mill, the ibrik, some demitasse cups, and if desired, sugar or spices. If using cardamom (very authentic!) try getting whole seeds and crush them extra fine, and use sparingly. 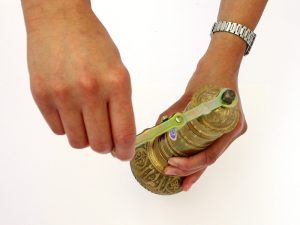 Turkish mills
Specialized brass mills are found almost anywhere (try Greek or Turkish food stores, or look for the Zassenhaus mill), and while very slow to grind, do an exceptionally fine grind. 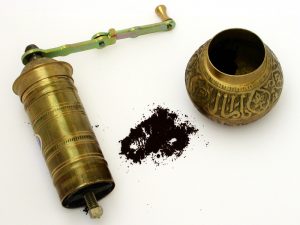 The powder
Turkish coffee requires an extremely fine grind – finer than espresso – or almost as fine as baby powder. The finer the better. 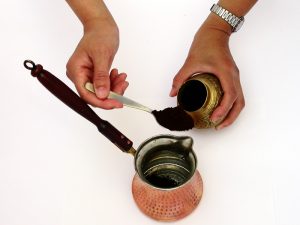 Measuring
Normally we add cold fresh water first – use your demitasse cups to measure in your amounts (we didn’t in this pic). Then add one heaping teaspoon of coffee per demitasse of water. Adjust to your own taste after brewing a few times. 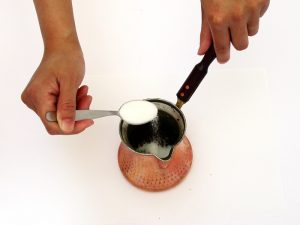 The Sweet as Love
Sugar is a frequent additive to turkish coffee. Adjust to taste, but typically I add 1 teaspoon for every two teaspoons of coffee. Also very crucial – stir the slurry of cold water, coffee and sugar before you start brewing, until the sugar is disolved. 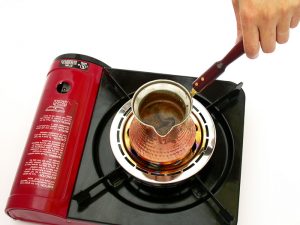 Getting started
Once your sugar is completely disolved, start brewing over a medium-low heat. Too high a heat will damage the coffee. Do nothing at this point (no more stirring) but watch carefully. 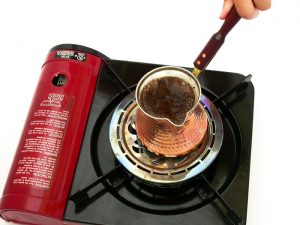 First boil
As soon as the mixture starts to boil, it will froth up, and froth up FAST. Before the froth flows over the top, remove the ibrik from the heat and let the froth settle down. 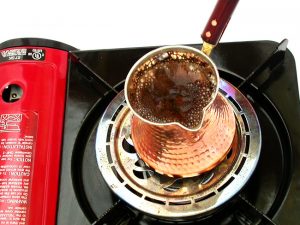 Second boil
Let the froth build up again (remember, it will build fast once it starts), and remove from the heat again, to let it settle down. 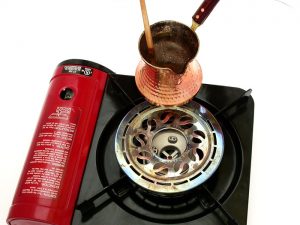 Third boil
Optionally, on the third boil, you can stop the brewing at this point and serve (do not stir). In this variation though, we stirred the slurry after removing the pot from the stove on the third boil. This settles down the grinds in the foam. 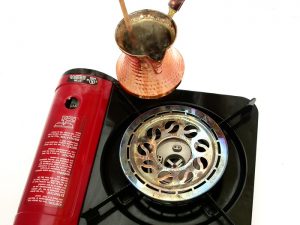 Fourth boil
This one is totally optional – in fact, three boil ups are best. But for a cleaner cup, let it boil and froth up one more time, and remove from heat (in this case, we weren’t stirring again, but left the stirrer in the pot). 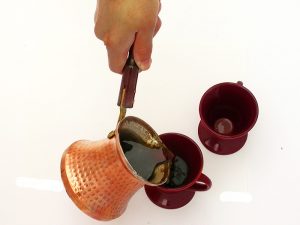 Serve
Alternate pouring bits into each cup – 15ml here, 15ml there, then back to the first cup for another 15ml. If we hadn’t stirred, the coffee would have had lots of froth pouring out as well. In this case, very little sediment is pouring out. 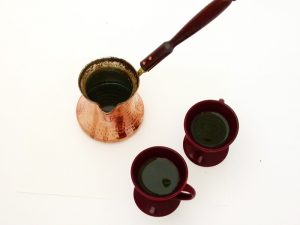 Finished, time to drink!
After the coffee is served, the majority of the grounds are left in the ibrik (it’s wide bottom design aids in this). The stirred method provides a fairly clean cup – not as clean as a press, but very nice. Enjoy!