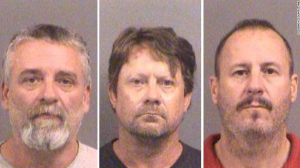 The FBI thwarted an act of domestic terrorism on Friday when they arrested three white men for plotting to blow up an apartment complex in Kansas.

Curtis Allen, Gavin Wright, and Patrick Stein were all taken into custody after an investigation that took eight months busted the trio for planning a massive terrorist attack in Garden City.

Their target was an apartment complex and a mosque that serviced 120 Somali refugees.

According to KWCH, United States Attorney Tom Beall said “the men stockpiled a large cache of firearms, and ammunition.”

Beall said the men planned to park vehicles full of explosives at all four corners of the Garden City apartment complex. The men said they wanted to “wake people up”.

Beall said the men wrote a manifesto, which they wanted published after the bombing.

According to an affidavit, the were a part of a group called the Kansas Security Force and the Crusaders.

“These are militia groups whose members support and espouse sovereign citizen, anti-government, anti-Muslim, and anti-immigrant extremist beliefs,” read the affidavit.

The three men had planned to carry out the attack on November 9th, one day after Election Day.

And as it turns out, Curtis Allen is a supporter of Donald Trump and his Facebook page is full of anti-Muslim rhetoric.

“I personally back Donald Trump,” an unhinged Allen wrote in a post ranting about how Hillary Clinton is supposedly going to put Americans in FEMA camps and take all guns away.

Allen was also particularly paranoid about Muslims. Here is just a sampling of his posts.

Clearly, this guy hates Muslims, and his hate and paranoia was only perpetuated by Republican nominee Donald Trump.

Trump has built his campaign on bashing Muslims, especially Muslim refugees. So Allen decided to join with two other guys in an effort to kill Muslims. Whether the other two are Trump supporters as well is not known, but this is how dangerous Donald Trump has become in our country. He is making right-wing nut jobs blood thirsty and paranoid enough to commit acts of domestic terrorism.