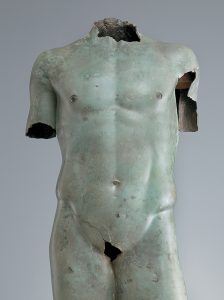 The surfaces of ancient bronze sculptures have a lot to say about where they’ve spent the last 2,000 years. 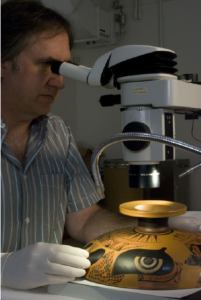 When we see ancient sculpture in museums, we’re generally faced with beautiful white marble and green bronzes. It’s difficult to imagine that these objects were once part of a colorful world where marble was painted and bronze patinated (surface-treated) to produce more naturalistic colorations.

Bronze sculptures were cast from different alloys of copper, tin, and lead. Following their useful life (over 2,000 years ago!), they were abandoned and buried in a variety of environments including rivers, oceans, and underground. To add to their stories, many bronzes discovered hundreds of years ago were restored according to the tastes of the day. Ancient bronzes, therefore, have a range of colors that have less to do with their original use and more to do with how they survived through time. These colors and so-called “burial patinas” have value in themselves, testifying to an object’s antiquity.

Today, ancient bronzes have burial patinas with a range of colors including red-browns, browns, greens, blues, and even black. As examples, the bronze shown above from the site of Vani in the Republic of Georgia buried in a sandy soil has an even pale blue patina, while the Victorious Youth shown below, a sea burial, has a variegated patina with a range of colors. 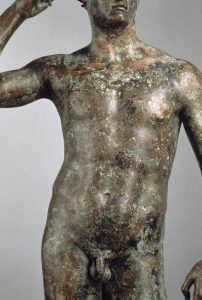 The colors we see on ancient bronzes today are mostly a result of copper oxidizing to form red-brown cuprite, green malachite, and bluish azurite. Although some metallic bronze core may remain, the surface gradually reverts to its original state as an ore, reducing the metal content.

In addition to being colorful, patinas sometimes preserve details of the original surface layer of the bronze sculpture—such as the original surface contours and evidence of surface tooling such as polishing, chiseling, and scraping. In the past, restorers would often remove surface oxidation layers in a mistaken belief that the surface had to have a metallic appearance to truly be representative of “bronze.” However, today we know removing these layers can also eliminate much of the surface detail, and we conservators employ much less aggressive cleaning methods. In fact, we seldom clean to the point that we reveal metal. 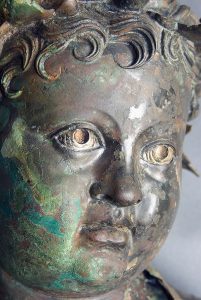 Copper burial patinas are generally chemically stable and confer some protection to the object. In some instances, however, they may be unstable (“vile”) and present continued preservation issues in both storage and display.

Of particular concern are chorides (table salt!) present in certain terrestrial environments, and of course in the sea. Bronzes buried in salty environments can absorb salt over the years, and after excavation, the salt remains within the slightly porous bronze structure. Salt is bad for all metals, but in copper alloys it works in a particularly damaging recurring cycle. Salt forms a mild hydrochloric acid that attacks the copper in the alloy, resulting in the formation of a copper chloride and minerals. The most common of these minerals are atacamite and paratacamite (both named in the early 20th century after the Atacama Desert of Chile). The mineral formation process re-releases the chloride, which once again reacts with copper to form yet more copper chloride; and the cycle continues. Unchecked, this process can result in significant damage, acting as an insidious disease. Conservators frequently term it “bronze disease.”

Conservators work to identify particularly problematic bronze objects and prevent further deterioration. As I noted above, chloride salts and copper do not make a good combination, and the “bronze disease” cycle may be activated if unstable bronzes are stored or displayed at humidities above 40%. Copper corrosion may appear as powdery, pinhead-size blue-green deposits or be more scattered. 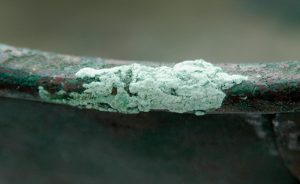 Chloride corrosion on a copper-alloy bowl

So what can be done? Conservators can carefully soak salts out, treat copper alloys more generally with chemical corrosion inhibitors, or treat them with spot methods. Coatings may also reduce the ability of water to react with the copper salts.

Perhaps the most effective treatment of all is prevention. Keeping unstable bronze sculptures in low humidity—as in several displays of the exhibition Power and Pathos: Bronze Sculpture of the Hellenistic World—inhibits the chemical reactions that cause damage in the first place.