“The unlimited arrogance of Burgundy! The whole history of that family, from the deeds of knightly bravado, in which the fast-rising fortunes of the first Philip take root, to the bitter jealousy of John the Fearless and the black lust for revenge in the years after his death, through the long summer of that other magnifico, Philip the Good, to the deranged stubbornness with which the ambitious Charles the Bold met his ruin – is this not a poem of heroic pride? Burgundy, as dark with power as with wine…greedy, rich Flanders. These are the same lands in which the splendour of painting, sculpture, and music flower, and where the most violent code of revenge ruled and the most brutal barbarism spread among the aristocracy.” 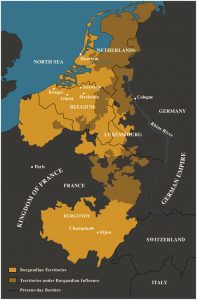 Burgundy and the Burgundian Netherlands: territories inherited by Charles the Bold in 1467 (map: National Gallery of Art)

This remarkable passage from Johan Huizinga’s early twentieth-century classic The Autumn of the Middle Ages anticipated how the history of Burgundy has been written by many later historians: that is, as a series of successive dukes (Philip the Bold, John the Fearless, Philip the Good, and Charles the Bold).

The first of these, Philip the Bold, became one of the wealthiest individuals in western Europe after he inherited the county of Flandersfrom his father-in-law in 1384, adding to his lands in Burgundy. His successors expanded on these holdings to create a territorial power located between France and the Hapsburg Empire.

From the beginning, the dukes of Burgundy aspired to rival kings in their magnificence and authority. Their wealth and access to Flemishcraftsmen enabled the dukes to produce one of the most visually splendorous court cultures in western Europe, one that in turn influenced royal patronage and ceremony in Spain, France, England, and the Hapsburg Empire. 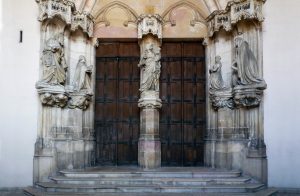 The first major project undertaken by a Burgundian duke was the construction of a Carthusian monastery outside Dijon, the Charterhouse of Champmol (1383—c. 1410), eventually served as a mausoleum for Philip the Bold and many of his descendants. The monastery was destroyed during the French Revolution and the site is now a psychiatric hospital, but some monuments from it survive, including the tombs of Philip the Bold and John the Fearless. 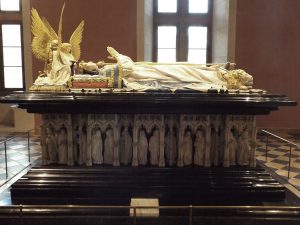 Other monuments include the so-called Well of Moses, which sits above a well in the main cloister of the monastery, and which includes life-size statues of Old Testament prophets below a crucifixion scene (that does not survive). The base with the prophets can still be visited in its original place, as can the portal to the church of the Charterhouse, which still has life-size statues in deep relief of Philip and his wife Margaret praying to the Virgin and Child and supported by donor saints. The Charterhouse of Champmol was intended to secure Philip’s memory and prayers for his soul after he died, but it was also a political monument, serving to remind his family and peers of his wealth and power. 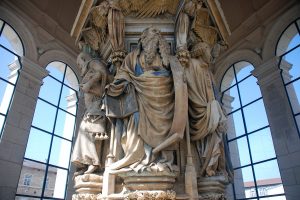 A turn towards Flanders

During the fifteenth century the main site of ducal patronage moved towards the Burgundian territories in the Low Countries. After the assassination of John the Fearless in the presence of the French king in 1419, the third duke, Philip the Good, shifted his attention away from the intrigues of Paris and France, focusing instead  on consolidating and expanding his territories in the Netherlands. The most famous artworks made in the court of Philip the Good are the paintings of Jan van Eyck, who Philip retained in his services.

Unfortunately, although we know van Eyck made portraits of Philip and his wife, Isabella of Portugal, there is no surviving work known to be commisssioned by Philip. As the art historian Craig Harbison has suggested, van Eyck might have been most often enlisted by the duke to decorate the courtly environment, either by painting walls or even designing stages and centerpieces for courtly ceremonies such as weddings, funerals, and tournaments. One of the most spectacular types of ceremonies would have been “Joyous Entries”: civic processions in which the duke and his entourage were guided through and around a town lined with pageantry, plays, and tableaux vivants. These events marked a town’s acceptance of their new or current ruler. 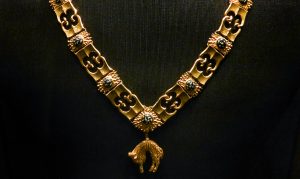 Knights of the Golden Fleece

Philip the Good and Charles the Bold knew their titles (Dukes) were inferior to those of their neighbors (including the Holy Roman Emperor and the King of France), and they both sought crowns from the Holy Roman Emperor. Both also had ambitions to launch crusades against the Ottoman Empire. Even though these later two dukes never went on crusade, they often publicly fashioned themselves as defenders of Christendom. These two rulers therefore favored tapestries and manuscripts that depicted the lives and actions of chivalric heroes, particularly those of Alexander the Great (who conquered the east) and Saint George (a Christian warrior). In 1454, Philip the Good even hosted a grand banquet, the famous “Feast of the Pheasant.” This spectacle was intended to encourage the members of the chivalric order Philip founded, the Knights of the Golden Fleece, to vow to support a crusade. The tables were decorated with statues, and automata (moving statues), and accompanied by music. An elephant (most probably a mechanical one) with an actor dressed as a woman personifying the church was led before the guests, and the Knights had to make their oath before a live pheasant decorated with pearls and a gold necklace (perhaps like that worn by members of the Golden Fleece).

Not everyone in Burgundy shared these chivalric values. The refusal of the Netherlandish towns to fully support and fund Charles’s wars played a major part in his downfall and death at the Battle of Nancy in 1477. This event marked the beginning of the end for the Burgundian state, but its art and ceremony would remain a strong influence on the Hapsburg dynasty that subsequently took control over the Burgundian Netherlands. The towns that had provided the crafts, stages, hosts, and audience for the Burgundian courts would also continue to develop their own civic visual and ceremonial cultures. The remarkable splendor and influence of the short-lived Burgundian court stemmed from its feverish and often violent ambition as a wealthy but precarious power in western Europe.

1 thought on “Burgundy in the Fifteenth Century”