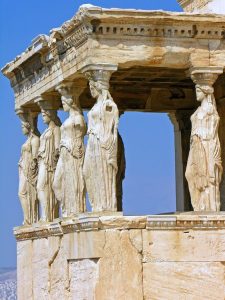 A detail of the south porch of the Erechtheion temple on the Athenian acropolis. The building was constructed between 421 to 406 BCE to house the ancient wooden cult statue of Athena and as a shrine to various local deities including Erechtheus. / Photo by Dennis Jarvis, Flickr, Creative Commons

The term Caryatid first appears in the 4th century BCE and was coined by Vitruvius in reference to Karyai in Laconia.

Caryatid is the name given to an architectural column which takes the form of a standing female figure. The first examples come from ancient Greek architecture and indeed, the most celebrated examples are found in the south porch of the Erechtheion on the acropolis of Athens.

The term Caryatid first appears in the 4th century BCE and was coined by Vitruvius in reference to Karyai in Laconia where women often danced balancing a basket on their heads in honour of Artemis and where Caryatids were used in Archaic architecture.  They were an evolution of the earlier korai statues of both male and female figures prevalent throughout the Archaic period and used as columns in Ionian architecture. These were themselves an evolution of Persian columns which often employed animal figures within the column design.

Archaic Caryatids were usually used in the porches of Treasury buildings which were built to house offerings from specific states at religious sanctuaries such as Delphi and Olympia. The most important treasury at Delphi was from the Siphnians (c. 525 BCE) and this and at least two other Treasuries had Caryatids. Caryatids of this period often have a short column drum above the head in order to facilitate the join with the column capital.

The most famous Caryatids are the six which support the roof of the false south porch of the Erechtheion on the Athenian acropolis. This building was constructed between 421 and 406 BCE as part of Pericles’ great project to rejuvenate the architecture of the great city. The Erechtheion was built to house the ancient wooden cult statue of Athena but also served as a centre for the cults of Erechtheus (a mythical king of Athens), his brother Boutes, Hephaistos and Poseidon. The Caryatids display features which would become staple elements of Classical sculpture: clothes which cling to the body (the ‘wet look’) and a bold and more dynamic positioning of the hips and legs. Although each Caryatid wears the same robe – a belted Doric peplos and short himation – each is uniquely rendered, a feature particularly noticeable in their intricate plaited hairstyles (best seen from the rear). The arms of the figures have unfortunately been lost but Roman copies show them holding in their right hands phialai – shallow vessels for pouring libations – whilst their left hand raised slightly their robe. Scholars believe them to be carved by different artists, most probably from the workshop of Alcamenes, student and colleague of Pheidias. 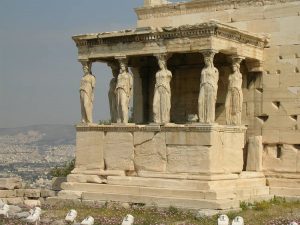 Interestingly, the porch of the Erechtheion stands over what was believed to be the tomb of the mythical king Kekrops and perhaps the Caryatids and their libation vessels are a tribute to this fact – libations were poured into the ground as an offering to the dead. The Caryatids now on the acropolis are copies, five of the originals reside in the Acropolis Museum of Athens and the other is in the British Museum, London.