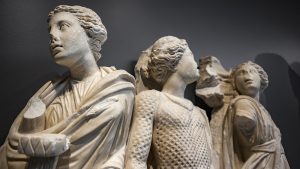 The story of how pieces of a Roman sarcophagus bearing Greek Muses were prepared to return to the Getty Villa galleries.

Newly on display in the Later Roman Sculpture gallery (207) at the Getty Villa is the front panel of a large Roman sarcophagus featuring the Muses—the Greek goddesses of the arts.

Acquired in 1972, it is decorated with high-relief figures of the Muses, but unfortunately it survives only as fragments. The preserved parts include a section of the front panel with four figures—from left, a seated woman representing the deceased, and three standing Muses, namely Terpsichore, Thalia, and Euterpe. Also preserved—but not displayed in the gallery—is the sarcophagus’s right corner, at which stands another Muse, Melpomene, and a bearded man (probably a poet) on the short end.

The fragmentary sarcophagus was on display when the Getty Museum first opened in the Getty Villa in 1974 and remained on view into the 1980s, but has since been in storage. 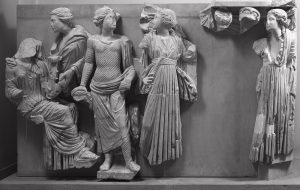 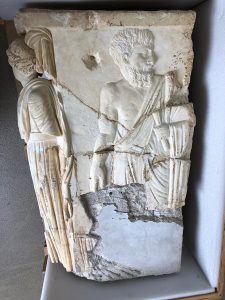 Fragment of the end of the sarcophagus’s right corner showing the figure of a bearded man holding a scroll. Photo: William Shelley

While preparing for the recent reinstallation of the Museum’s antiquities collection at the Getty Villa, curators and conservators revisited the sarcophagi left in storage. This is the story of how this particular sarcophagus came to have its spot in the Later Roman Sculpture gallery, and how these particular Muses inspired an innovative approach for the conservation and display of ancient sculpture.

When we opened the crates containing the fragments in the conservation lab, two things became immediately clear. One, they belonged to a sarcophagus of a scale way beyond average, with figures at least four feet tall, and two, their condition was poor. The individual figures were each assembled from several fragments, but the joins between those fragments had not fared well over time.

But, it was also apparent that the quality of the relief was extraordinary: the figures are carved almost entirely in the round. All areas of the marble surface, even invisible ones inside recesses or behind the figures, were painstakingly smoothed and polished. Further research suggested this could be the largest sarcophagus of its type known to be produced in Rome—a work of great artistic ambition and a powerful marker of status for someone in the one percent of Roman society.

While we would confront many challenges, including major stabilization and conservation efforts, in order for us to return the sarcophagus in the Villa galleries, we were quickly convinced that this was a project worth pursuing.

The Challenge of the Missing Muses

What a shame the sarcophagus is so incomplete!

It is difficult to assess how much of it is actually missing. In Greek mythology, the Muses are a total of nine sisters. Assuming they were all originally present on the sarcophagus, three of them are unaccounted for—in addition to the four remaining Muses, two more are partially preserved. The missing muses are visible in a hand (at left) that rests on the seated woman’s shoulder, and on the right corner fragment where a hand holds the globe, which would have been Urania, the Muse of astronomy. (Each Muse was traditionally represented with attributes that identified her.)

In light of these issues, we made the difficult decision to not include the right corner with Melpomene, the bearded man, and the fragments of Urania in our display plans. Including it would have required a reconstruction of the full volume of the sarcophagus, which would have certainly been impressive and instructive for its size, but would have meant a mostly undecorated box would occupy a large expanse of space in the gallery.

Besides, the exact distance between the fragment with the seated woman and the right corner fragment remains hypothetical at best: just how many figures appeared in that gap? But even without tackling that question, how to conserve and mount the fragments of the front panel alone presented plenty of challenges.

The Challenges of Treatment

Again, the pieces overall were in rather poor condition. Each figure was broken into numerous fragments. Previous conservators had treated them using a myriad of different materials. They had also assembled them using methods of pinning that are inadequate by today’s conservation standards, which uphold the principle of reversibility like a sacred law. Very simply put, this principle states: whatever you do, make it easy to undo in the future.

Plaster had cracked, epoxy had yellowed, and inside the holes that had been drilled for the pins we found unforgivingly hard polyester surrounding the pins. These joins had been designed to be permanent but had nevertheless failed.

After assessing the damage, separating all of the individual fragments became the next order of business. There turned out to be nearly 50 of them!

Having removed all the old pins, we carefully cleaned each fragment of all resins, stains, and grime. This stage of treatment was also challenging as we had made a remarkable discovery early in the process of cleaning: several areas on the drapery and the musical instruments of the Muses retained ancient color pigments—mostly purple as far as the naked eye could determine. 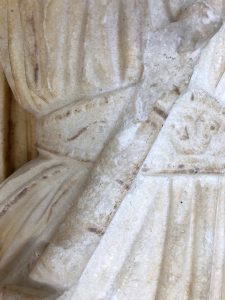 Ancient purple pigment is visible on the drapery, belt, and flute of the Muse Euterpe at the right end of the relief section. Photo: William Shelley

Like marble sculpture in the round, Roman sarcophagi were often painted in vivid colors that enhanced the carved forms or added extra detail, such as a decorative border on a garment. Preserving those delicate traces of pigment—which hardly ever survive on sarcophagi—meant we had to be extra cautious when treating the surface, avoiding aggressive solvents and mechanical abrasion. (In the near future, we will conduct more research of the polychromy traces and subject them to scientific analyses.)

The Challenge of Reassembly

The Muse sarcophagus reminded us of the importance of holding to the principle of reversibility throughout our struggle to reverse the failed interventions of our predecessors.

So, when it came to reassembling the fragments, we established three main guidelines, one of which led us to develop a new method of using pins in the conservation of stone sculpture.

The first guideline allowed for greater flexibility in handling and mounting these heavy objects and thus reduced the risk of damage. The second was aimed at preserving a maximum of the original material, which is already heavily fragmented and weakened by earlier interventions, so we didn’t want to drill any additional holes. And the third led us to combine steel pins with customized magnets to hold the fragments together, so we could ensure optimal structural stability and guarantee easy reversibility. 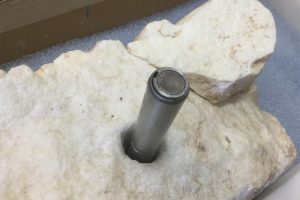 A Magnetic Approach to Stone Conservation

That last point is an entirely novel approach in stone conservation, so how does it actually work?

The basic idea is that sleeves—think small steel tubes—are secured inside the existing holes in each fragment. The sleeves receive a snugly fitting pin that connects the two fragments. So far, this method would be familiar to conservators. 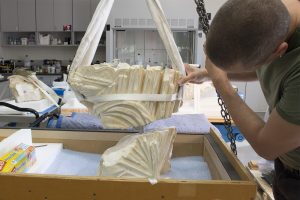 A box filled with tiny glass spheres holds one of the fragments of the seated figure steady while another hanging from a hoist is aligned with it; visible between the two fragments is the steel pin that will attach them. The fragments are placed upside down for ease of rigging. Photo: Danielle Freeman

The difference now: instead of attaching the pins to the sleeves, and the fragments to each other, with resin, we placed magnets inside the sleeves and at the ends of the pins.

The advantages of this approach are:

Muses Returned to the Gallery

Finally, together with our mount-makers, we devised a mounting system that reinforces the new pinning method and allows the fragments of the relief to hang freely on the gallery wall as if they were one piece. 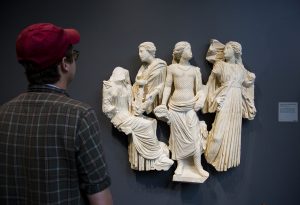 The front panel of the Large Sarcophagus with the Muses hanging in Later Roman Sculpture (Gallery 207) at the Getty Villa. Photo: Sarah Waldorf

One abutting the other, the four figures are individually anchored to a single steel plate that follows their combined outline. The whole assembly is installed by way of a large cleat that transfers nearly 1,000 lbs. of weight to the Villa’s rigid art support system that is hidden inside the walls.

The Getty Villa has a memorable collection of Roman sarcophagi and other funerary monuments such as ash urns, grave reliefs, and tomb altars, many of which were reinstalled in the two Roman sculpture galleries on the second floor—along with the front panel of this large sarcophagus. On your next visit to the Villa, see the artistry of this ancient sculpture up close, and perhaps also reflect on the creative work that goes into keeping it safe while on display. Perhaps those Muses will magnetize you!