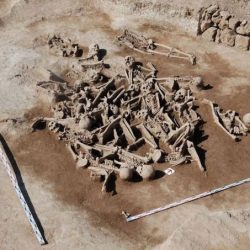 A mass burial of battle victims from the Xiongnu period in Mongolia. The Xiongnu warriors are linked to the nomadic people who would later become known as the Huns. Photo: BBC News By Ivan Dikov / 05.11.2018 The Justinian Plague of 541 – 542 AD, which may have killed up to 25 million people, likely originated in Asia,[…]