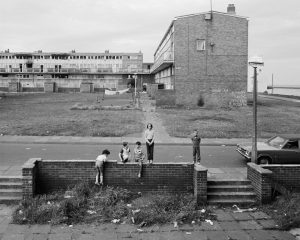 The artist from the Isle of Man speaks about the advantage of shooting with a big camera, getting close to your subjects, and the danger of shooting digital.

By Laura Hubber / 07.07.2017
Content Producer in the Interpretive Media Department of the J. Paul Getty Museum

“I am the photographer of the de-industrial revolution in England. I didn’t set out to be this. It’s what happened during the time I was photographing.” —Chris Killip

Chris Killip photographed in the north of England during the 1970s and 80s, when the country’s three main heavy industries—steelworks, shipyards, and coal mines—went into decline. Killip calls the resulting book, In Flagrante, a “portrait of working class struggles at that time.”

It’s also a book of portraits Killip made in difficult, closed communities, where it took him months, sometimes years, to earn people’s trust. Committed to cultivating relationships with his subjects, Killip spent time in each place he photographed and often stayed in contact with the people in his pictures. For his Seacoal series, for example, he lived in a caravan on Lynemouth Beach, Northumberland, for over a year.

The images here are included in an exhibition at the Getty Museum, Now Then: Chris Killip and the Making ofIn Flagrante (May 23–August 13, 2017).

I interviewed Killip for the audio tour (six tracks are embedded below, and the full tour is available free online), but this conversation begins with Killip’s deliberate choice to use an unwieldy plate camera that produces 4×5″ negatives. 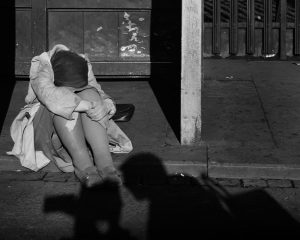 “In Flagrante means ‘caught in the act,’ and that’s what my pictures are. You can see me in the shadow, but I’m trying to undermine your confidence in what you’re seeing, to remind people that photographs are a construction, a fabrication. They were made by somebody. They are not to be trusted. It’s as simple as that.” —Chris Killip

Chris Killip: My camera’s very visible. It’s big. And there’s something good about this, where you have to deal with the fact that I am a photographer and I am here. Look at this great big contraption.

Laura Hubber: When you take a picture of someone, what are you hoping to capture or convey?

My pictures are a mixture of people I know well and intimately and people I don’t know.

It’s more difficult when you have strong feelings about the person. Sometimes you’re more successful when you know less about someone, because I think I see them more clearly. I don’t see them as my friend, or the people that I know, or a person that I maybe even don’t like that much or something. They have no baggage. I see them just as a visual thing with no preconditions. 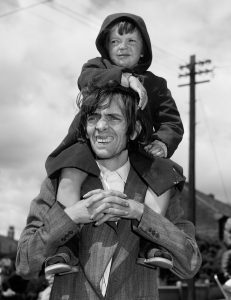 “You’re going to get a picture by being there. It’s never easy. Sometimes you’re good and they’re good…I’d never seen them before and I never saw them again.” —Chris Killip

The people I like very much and I’m very close to, sometimes I don’t get a picture that I think does them justice because I know so much about them

When Richard Avedon and Annie Leibovitz take a picture, we recognize the fame of the person. It’s harder to take a picture of someone that’s completely unknown and make it interesting, because they’re not famous. They’re anonymous.

I’d like my pictures of people to be interesting even though you don’t know the people in them.

LH: How did you begin working with a plate camera?

CK: I was taking pictures with a 35mm camera on a tripod, and a friend in London told me I was crazy, that I should use a plate camera. I didn’t want to use a 4×5 because it wasn’t the image I had of myself. You know, swinging London, and all those sorts of things. But I did, and I can remember the first picture I took. My heart sank because I realized, for what I was doing, the plate camera was much better suited. And I realized I’m stuck with this sort of terrible camera now, and I reluctantly started to use a plate camera.

LH: Do you think by using the bigger plate camera, people present themselves differently?

CK: Yes, they do. When you make a portrait of someone with a plate camera, it takes time, and it gives the person a chance to address the camera. For a want of a better word, it’s more serious. It’s not a casual thing, and it’s the paraphernalia of using the plate camera that emphasizes that, too. I think it works to your advantage.

They know this is going to live after this moment. It’s not ephemeral.

Later, I wanted to get away from this very formal thing and changed my photography, and so I used a plate camera where you had a cape. I had a thumb press, so I’d be looking at you, but you never knew when I was going to take the picture.

I might only be three feet away from you, and I’d be guessing the focus. And I’d click and that was it and you wouldn’t even know I’d taken it. 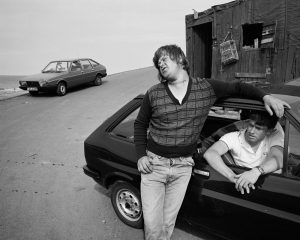 “I’m talking to him and photographing, but I can do that because I knew him.” —Chris Killip

LH: To make the Seacoal pictures you spent thirteen months living on the beach.

CK: Probably longer. I was photographing and I thought I wasn’t getting close enough, so I bought a caravan and moved onto the place and that made a very big difference. And I made some very great friends there, people that I’m still friends with all these years later. 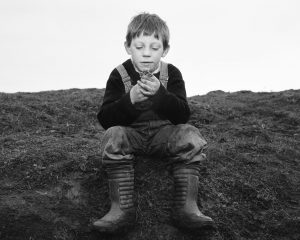 “He’s explaining to me the difference between a frog and a toad…. When I first met Rocker, he was about seven years old. I spent about three years on and off watching him grow, but I then stayed in touch with the family when I wasn’t photographing there anymore. I like keeping in contact with people.” —Chris Killip

LH: Did your photographs change as you got to know the people of Lynemouth better?

CK: Yeah. ‘Cause you can’t go in somebody’s caravan, a very confined interior, unless you know them. And also have a camera with you. 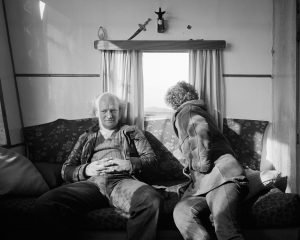 “My caravan was like a café and it [had] nice light because the windows were on both sides. It was a good place to photograph.” —Chris Killip

CK: I had a caravan, and I was very famous for making cups of tea, and people used to come. It was like my studio, really. People would sit down and the entrance fee to my place was I’d be photographing you.

LH: So, in the photographs where intimate stuff is happening, the people aren’t really looking at you, necessarily. They’re just going about their lives. Do you then wait for the moment that you want? Do you let life just happen?

CK: Sometimes, if I’ve been taking a portrait, I say, “Could you just hold still a moment?” But usually I don’t say anything. You know, it’s more interesting just looking, and seeing something and trying to photograph it. But you’re always thinking, you know; you’re working at your composition, thinking how to make this more interesting.

I worry about the digital camera. I tell my students to turn off the screen, and they don’t. They think I’m crazy. I’m not crazy. I know what made my pictures better was the anxiety I had, because I didn’t know what I’d just taken. I couldn’t see it, and I always thought it wasn’t good enough, so I’d push a bit harder. I’d try to make a better picture.

LH: Were your subjects interested in seeing their portraits?

CK: I’d give people pictures, yeah. That was always a strange thing because you never knew what was going to happen in life. I can remember the pictures I took in Skinningrove. There was a tragedy on July 29th, 1986. The boat with three people in it I knew well overturned and David and Leso were drowned.

After the funeral David’s mother got in touch and asked me if I had any pictures of David, and I said, “No.” And then that night I thought about it and realized, she didn’t mean, “Do you have any photographs you wanted to exhibit of David?” She was asking me, did I have any pictures of her dead son? So I looked through my contact sheets and I had. I had pictures from when he was thirteen or fourteen to when he was nearly seventeen when he drowned. He was just in pictures, so I made a little album of 30 pictures and gave it to her. 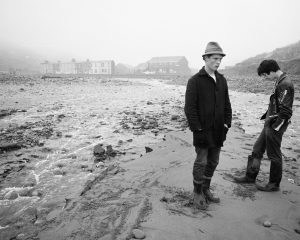 “The last picture I took of David. Two years after I’d taken that picture, he was fishing and the boat overturned and David drowned.” —Chris Killip

CK: I often wondered why I was in Skinningrove. You don’t know what’s going to happen, and for better or worse, a photograph is a chronicle of a death foretold. It’s the one thing about everybody that you do know. They are going to die. You don’t know when or how. But things happen. And you hope when you photograph, you do it well, and that they’re well-remembered.