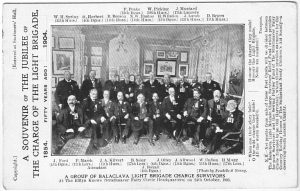 A misinterpreted order, near slaughter, and casting blame.

Prelude to the Charge

The Battle of Balaklava is remembered primarily for the Charge of the Light Brigade. However, there were other events in the battle that, militarily, were equally important. 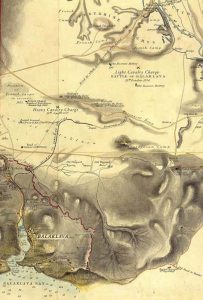 Map of the Battle of Balaklava showing the battlefield, including the Fedyukhin heights occupied by the Russians. British positions are marked in red. The locations of the charges by both the Heavy Brigade and the Light Brigade are also marked. / The National Archives, Public Domain

An important factor in the Battle of Balaklava was the terrain over which it was fought. Two valleys, separated by a ridge, were the scenes of three distinct phases of the battle: two cavalry charges and a standing defence by the 93rd Highlanders. The ridge was significant in that it obscured the action in the north valley from the view of the Commander-in-Chief, Lord Raglan. His inability to see what was happening may have been one reason for the confusing order sent to the Light Brigade during the battle. 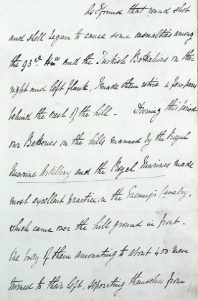 Sir Colin Campbell’s despatch about the actions of the 93rd Highlanders / The National Archives, Public Domain

The first move by Russian forces towards Balaklava was repulsed by the stand of the 93rd Highlanders, led by Major-General Sir Colin Campbell. Campbell formed his men into a line (rather than into a square, which was the accepted way for infantry to face a cavalry charge) and the probing Russian advance was driven off with volleys of musket fire. This action became known as ‘The Thin Red Line’.

For more on ‘The Thin Red Line’, link to the website of the Argyll and Sutherland Highlanders (which was formed by the amalgamation of the 91st and 93rd Highlanders in 1881).

The Charge of the Heavy Brigade 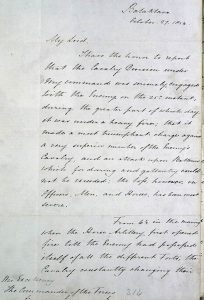 This is an extract from the Earl of Lucan’s despatch in which he reports on the charge made by the Heavy Brigade against superior numbers during the Battle of Balaklava. Lucan was the commanding officer of the cavalry division of which the Heavy Brigade formed part. / The National Archives, Public Domain

Repelled by the 93rd Highlanders, the Russians regrouped and moved more of their cavalry into the south valley. Brigadier-General Scarlett, commander of the Heavy Brigade of cavalry, saw this and anticipated another Russian attack. He moved quickly and led the Heavy Brigade on an uphill charge into some 2,000 Russian horsemen before the enemy could complete its preparations. The Russians were duly forced back into the north valley.

The Charge of the Light Brigade 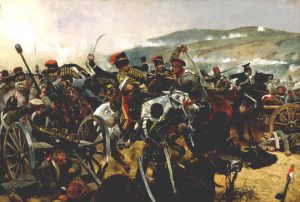 The order which came stated: ‘Lord Raglan wishes the cavalry to advance rapidly to the front – follow the enemy and try to prevent the enemy carrying away the guns. Troop Horse Artillery may accompany. French cavalry is on your left. R Airey. Immediate.’ 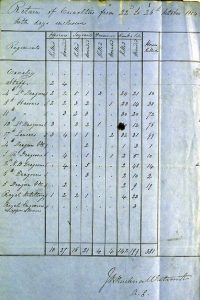 This is the casualty return for the period that includes the Battle of Balaklava. Casualty figures for the Charge of the Light Brigade total 110 killed, 130 wounded and 58 captured, a loss of some 40% of the brigade’s strength. / The National Archives, Public Domain

The order was brought initially to Lucan by Captain Nolan, a talented cavalry officer serving as aide-de-camp to Brigadier-General Airey (the Quarter Master General). Lucan passed the order on to Cardigan who, in response, led a charge of 673 soldiers up the length of the valley between two rows of Russian artillery on the heights. They were bombarded from all sides and suffered heavy casualties. It was a fiasco and only a charge by French cavalry saved the Light Brigade from total destruction. The battle ended with the Russians retaining their guns and their position, although they had failed to break through the British lines. 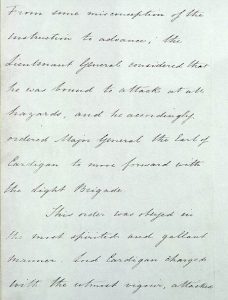 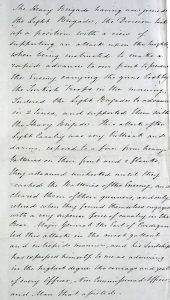 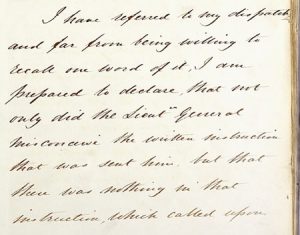 [LEFT]: This extract from Raglan’s despatch gives his report on the Charge of the Light Brigade, describing Lucan as having ‘…some misconception of the order to advance…’ / The National Archives, Public Domain
[CENTER]: Lucan’s despatch (from which this is an extract) gives his account of the Charge of the Light Brigade. He refers to ‘…being instructed to make a rapid advance to our front to prevent the Enemy carrying the guns lost by Turkish Troops in the morning…’ /  The National Archives, Public Domain
[RIGHT]: Raglan’s response to Lucan’s account (and particularly to Lucan’s version of Raglan’s order) runs to 11 pages. This extract refers to a previous order to Lucan ‘…which did not seem to me to have been attended to,…’ concerning the Russian positions. Raglan goes on to criticise Lucan for, having ordered the attack, then failing to reduce the risks to his men by using either the horse artillery or French cavalry in support. / The National Archives, Public Domain

The interpretation of the order to attack has been the subject of intense speculation by historians. A popular theory is that the order referred to recapturing Turkish guns that were being taken by Russian forces in the hills above the battlefield. Nolan, however, seems to have assumed the target was the Russian guns about a mile away up the north valley and may have advised Lucan to lead the charge there. Nolan, who charged with the 17th Lancers, was the first to be killed and was thus unable to clarify this point. Lucan and Cardigan for their part hated each other. (Lucan had been married to Cardigan’s youngest sister but was now separated from her.) None of the personalities involved in initiating the charge appear to have acted well. Raglan’s order was imprecise, Airey’s drafting of the order was ambiguous, Nolan failed to explain the order to Lucan adequately, Lucan failed to question Nolan properly to establish his commander’s intent and Cardigan failed to seek adequate clarification from Lucan. Lucan also failed to provide the support from the rest of the cavalry and the horse artillery mentioned in the order. After the charge, Lord Raglan blamed Lucan.

Originally published by The National Archives under the terms of an Open Government License.