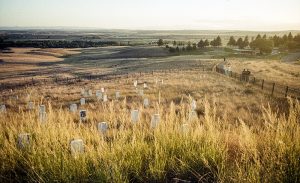 The battle is also known as “Custer’s Last Stand” and the “Battle of the Greasy Grass.”

The ‘Battle of the Little Bighorn’ was one of the most famous battles of the Indian Wars. In Native American terms, it was known as the ‘Battle of the Greasy Grass’, while it has been more famously known among Whites as ‘Custer’s Last Stand’.

The battle was an armed engagement between a Lakota-Northern Cheyenne combined force and the 7th Cavalry of the United States Army. It occurred between June 25 and June 26, 1876, near the Little Bighorn River in the eastern Montana Territory.

The most famous action of the Indian Wars, it was a remarkable victory for the Lakota and Northern Cheyenne. A sizeable force of U.S. cavalry commanded by Lieutenant Colonel George Armstrong Custer was defeated; Custer himself was killed in the engagement along with two of his brothers.

The Sioux controlled the northern Plains, including the Black Hills, throughout most of the nineteenth century. Paha Sapa, as the Hills were known to the Lakota Sioux, were considered sacred territory where they believe life began. The western bands of Sioux used the Hills as hunting grounds.

A series of treaties with the U.S. Government were entered into by the Allied Lakota bands at Fort Laramie, Wyoming, in 1851 and 1868. The terms of the treaty of 1868 specified the area of the Great Sioux Reservation to be all of South Dakota west of the Missouri River and additional territory in adjoining states and was to be

“set apart for the absolute and undisturbed use and occupation” of the Lakota.[1] Further, “No white person or persons shall be permitted to settle upon or occupy any portion of the territory, or without the consent of the Indians to pass through the same.”[2]

Although whites were to be excluded from the reservation, after the public discovery of gold in the 1870s, the conflict over control of the region sparked the last major Indian War on the Great Plains, the Black Hills War. Thousands of miners entered the Black Hills; by 1880, the area was the most densely populated part of Dakota Territory. Yielding to the demands of prospectors, in 1874 the U.S. government dispatched troops into the Black Hills under General George Armstrong Custer in order to establish army posts. The Sioux responded to this intrusion militarily.

The government had offered to purchase the land from the Tribe, but considering it sacred, they refused to sell. In response, the government demanded that all Indians who had left the reservation area (mainly to hunt buffalo, in line with treaty regulations) report to their agents; few complied. The U.S. Army did not keep miners off Sioux (Lakota) hunting grounds; yet, when ordered to take action against bands of Sioux hunting on the range, according to their treaty rights, the Army moved vigorously. 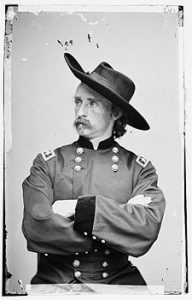 In the early summer months of 1876 the U.S. military officials planned a campaign to corral the Native peoples and force them back to the reservations. The War Department devised an ambitious plan to be carried out by three expeditions. The plan was to converge several columns simultaneously on the Yellowstone River where the Tribal members would be trapped and then forced to return to their reservations. The three expeditions involved in the northern campaign were:

Crook’s troops encountered a large band of Sioux and Cheyenne under Crazy Horse, Sitting Bull, and other leaders on the Rosebud on June 17th. The indecisive battle left them in need of reinforcements, so they retreated to the Tongue River to await supplies.

In the meantime, General Terry had discovered the same trail and sent Lt. Col. Custer with the 7th Cavalry up the Rosebud to locate the war party and move south of it. Terry, with the rest of his command, continued up the Yellowstone to meet Gibbon and close on the Indians from the north. The plan was to trap the village between these two forces. The 7th Cavalry split from the remainder of the Terry column on June 22nd and began a rapid pursuit along the trail.

While the Terry/Gibbon column was marching toward the mouth of the Little Bighorn, on the evening of June 24th, Custer’s scouts arrived at an overlook known as the Crow’s Nest, 14 miles east of the Little Bighorn River. At sunrise the following day, they reported to him they could see signs of the Indian village roughly 15 miles in the distance. Custer’s initial plan had been a surprise attack on the village the morning of June 26, but a report came to him that several hostile Indians had discovered the trail left by his troops. Assuming their presence had been exposed, Custer decided to attack the village without further delay. Unbeknown to him, this group of Indians were actually leaving the encampment on the Big Horn and did not alert the village. 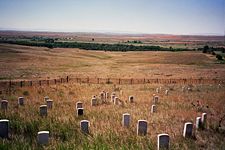 Custer’s scouts repeatedly warned him about the size of the village;

The unusually large village gathered along the banks of the Little Bighorn included Lakota, Northern Cheyenne and a small number of Arapaho. The size of the village is unknown, though is estimated to have been 950 lodges, with between 900 to 1,800 warriors. Custer’s overriding concern was that the Indians would break up and scatter in different directions. The command began its approach to the village at noon and prepared to attack in full daylight.[4]

Custer and his men—who were separated from their main body of troops—were all killed by the far more numerous Indians who had the tactical advantage. Terry and Gibbon did not reach the scene of Custer’s last stand until the morning of June 27th. The 7th Cavalry’s total losses in this action (including Custer’s detachment) were: 12 officers, 247 enlisted men, five civilians, and three Indian scouts killed; two officers and 51 enlisted men wounded.

The Natives were led in the field by Crazy Horse and inspired by Sitting Bull’s earlier vision of victory. However, Custer and his men also faced some of the greatest Indian leaders of the day: Sitting Bull, Four Horns, Crow King, Gall, Black Moon, Rain-in-the-Face, Hump, Black Moon, Red Horse, Makes Room, Lame Deer, He Dog and Two Moons. This event has come to be known as the “Battle of the Little Bighorn.” 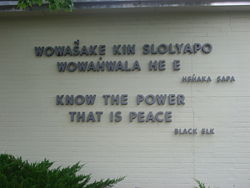 The site of the Battle of the Little Bighorn was first preserved as a national cemetery by the Secretary of War on January 29, 1879, three years after the battle. Christened “National Cemetery of Custer’s Battlefield Reservation,” it was intended to protect graves of the 7th Cavalry troopers buried there. Designating it as a National Cemetery would allow burials of soldiers from other campaigns and wars to be interred there as well.

Following the recovery of Custer’s body, he was given a funeral with full military honors and buried on this battlefield. His body was re-interred at the West Point Cemetery on October 10, 1877, prior to the official establishment of the Little Bighorn Cemetery. 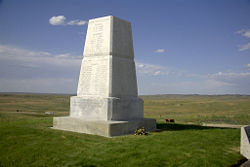 The first memorial on the site was assembled by Captain George Sanderson and the 11th Infantry. They buried soldiers’ bodies where they were found and removed animal bones. In his official report dated April 7, 1879, Sanderson wrote:

“I accordingly built a mound out of cord wood filled in the center with all the horse bones I could find on the field. In the center of the mound I dug a grave and interred all the human bones that could be found, in all, parts of four or five different bodies. This grave was then built up with wood for four feet above ground. The mound is ten feet square and about eleven feet high; is built on the highest point immediately in rear of where Gen’l Custer’s body was found.” 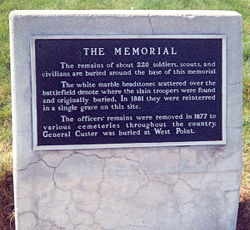 Lieutenant Charles F. Roe and the 2nd Cavalry built the granite memorial in July 1881 that stands today on the top of Last Stand Hill. They also reinterred soldiers’ remains near the new memorial, but left stakes in the ground to mark where they had fallen. In 1890 these stakes were replaced with white marble markers.

In 1940, jurisdiction of the battlefield was transferred to the National Park Service. It was redesignated “Custer Battlefield National Monument” in 1946, and listed on the National Register of Historic Places on October 15, 1966. These earliest memorials and designations honored only the U.S. Army’s dead.

“The time has come to give equal honor to the Indian people who’ve been denied that for so long” -U.S. Senator Ben Nighthorse Campbell, Northern Cheyenne.[3]

In the early 1900s, Native Americans began to request that markers be dedicated to the fallen warriors as well. These requests were ignored, or false promises were given. In response to this lack of concern, Russell Means, Sioux activist, led a contingent upon the battlefield on June 25, 1988, and placed a makeshift plaque upon the mass grave to represent a memorial to the Indian warriors.[3] 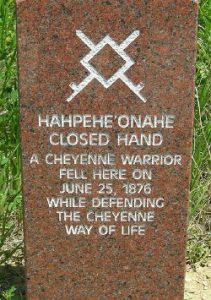 Though it is common at national battle sites in the United States for combatants on both sides of the conflict to be honored, until this time the memorials had only honored the U.S. troops.

“We want a place where the Native descendants can feel welcome and believe one’s people had done a courageous and good thing.” Arthur Amiotte, Oglala Lakota.[3]

The bill also called for an Indian Memorial to be built near Last Stand Hill. Though the bill had been signed into law in 1991, funding for the memorial was not secured until 2001. U.S. Senator Burns of Montana requested funding be included in the Department of Interior’s appropriations bill to be used to construct the Indian Memorial. It passed through committee, and then passed on the floors of the House and Senate in September 2001. President George W. Bush signed the bill that approved the necessary funds for the Memorial construction.[3]

On June 25, 2003, the Indian Memorial Center was dedicated. The visitors center contains a small museum and a bookstore. The design was determined through consultations between the National Park Service and tribal members who are historically connected to the events that occurred on the surrounding land. The office of the park historian in the historic stone house (original superintendent’s headquarters) houses the White Swan Memorial Library. It contains the most comprehensive collection of research materials available on the Battle of the Little Bighorn, as well as other related historical events.

“If this memorial is to serve its total purpose, it must not only be a tribute to the dead; it must contain a message for the living…power through unity.” -Enos Poor Bear, Sr., Oglala Lakota Elder.[5]