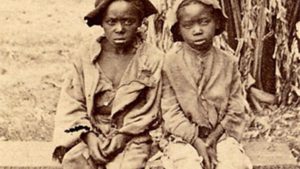 Collector Keya Morgan bought this photograph of two slave children, which was accompanied by a document detailing the sale of John for $1,150 in 1854. / Public Domain 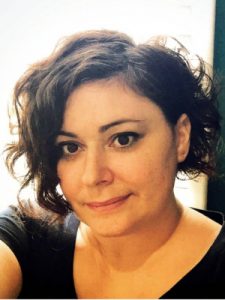 From the 16th to the 18th centuries, an estimated 12 million Africans crossed the Atlantic to the Americas in the trans-Atlantic slave trade. Used on plantations throughout the United States, Latin America and the Caribbean, enslaved Africans were shipped largely from West Africa. With an average life span of five to seven years, demand for slaves from Africa increasingly grew in the 18th century leading traders to take their supply from deep within the interior of the continent. Until recently, slave studies rarely discussed children’s experiences in the trans-Atlantic slave trade. It has been estimated that one quarter of the slaves who crossed the Atlantic were children. Yet, a lack of sources and a perceived lack of importance kept their experiences in the shadows and left their voices unheard. 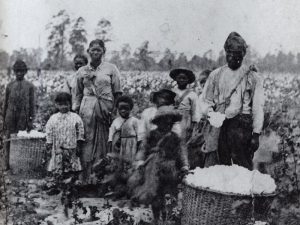 Family of black American slaves in a field in Georgia, circa 1850 / Wikimedia Commons

Like adults, children were unwilling participants within the slave trade that had a variety of sources. Children commonly found themselves enslaved as prisoners of warfare. When men were killed in battle, women, children, and the elderly became especially vulnerable. Those who were not killed or ransomed were sold into slavery. Commercial caravans frequently followed military expeditions, and waited patiently to exchange textiles and goods for captives. In some areas of West Africa, kidnapping was a popular method of acquiring children. Children were snatched while working in the fields, walking on the outskirts of town, or innocently playing outside away from their parents’ view. So that communities could make ends meet during times of famine, families sometimes sold their children into slavery. Many children also found themselves as pawns or bargaining chips, sold into slavery to repay debts or crimes committed by their parents or relatives. Some parents sold children who were in poor health, required special needs, or perceived as evil spirits.

Journey to and Sale on the Coast 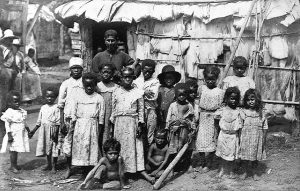 What happened in the days, weeks, or even months that followed their capture or sale was a whirlwind of events that had devastating effects on the psyches of the enslaved. Some children were sold immediately, and added to coffers of slaves bound for the coast. Others were sold several times over. Many children never left the interior and remained slaves in Africa. Others died somewhere on the route to the sea, along with thousands of other slaves, young and old.

For those children who made it to the coast, they were taken to a factory, castle, or trading post where they were sold to merchants who placed them in holding cells with other slaves. The merchants then stripped the children of any remaining clothing, and oiled their bodies with palm oil. Often coastal merchants shaved the heads. Once purchased, coastal merchants commonly branded the slaves with a symbol of the trading company or voyage owner on either their chest or back as a means of marking their commercial property and distinguishing their cargoes from the rest. 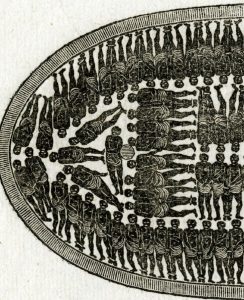 “Description of a slave ship,” by an anonymous artist, wood engraving, 1789 / British Museum via Wikimedia Commons

Traders generally defined children as anyone below 4’4″ in height, and those deemed as “children” were allowed to run unfettered on deck with the women. Those traveling on deck occasionally received special treatment and attention from the captain and crew, who gave them their old clothes, taught them games, or even how to sail. Other children, like Ottobah Cugoano, refused to play or even eat. Some children, held tightly in the comforting arms of the women, cried throughout the night. Taller children, like Olaudah Equiano, were placed in the hold with adults where they experienced horrible, unsanitary conditions. Whatever their size, crying or failing to eat or sleep resulted in harsh punishment.

Although children received some preferential treatment, most children suffered experiences similar if not equal to the adults traveling alongside them. This preferential treatment and travel outside of the hold gave children a better chance of survival, but it did not shield them from corporal punishment, malnourishment, and illness. During the Middle Passage across the Atlantic that lasted anywhere from one month to three, children experienced high mortality rates. Many succumbed to the illnesses that accompanied every slaving voyage across the Atlantic, especially yaws and intestinal worms. Sometimes ill children were thrown overboard in the hope that their disease would not spread to the rest of the slave cargo.

A Demand for Children 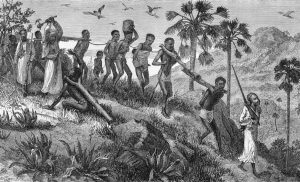 A coffle of men, women, and children, led by Portuguese slavers; one of the guards is murdering a captive unable to keep up with the rest, 1866 / University of Virginia via Wikimedia Commons

Until the 18th century most trading companies had little or no desire to purchase children from the coast of Africa, and encouraged their captains not to buy them. Children were a bad risk, and many planters and traders who purchased them lost money on their investment. Because children (especially the young and infants) were vulnerable to disease, the cost of transporting them lowered overall profits margins. Furthermore, African children would not be able to perform hard labor or produce any offspring until they came of age. As a result, unless a planter or merchant requested a special order, children were extremely hard to sell in West Indian markets.

By the middle of the 18th century, however, planters economically dependent on the slave trade came to depend on children and youth. As the abolitionist movement increasingly threatened their slave supply, planters adopted the strategy of importing younger slaves who would live longer. As a result, youth became an attractive asset on the auction blocks of the slave markets. Ironically, abolitionist sentiment changed 18th-century definitions of risk, investment, and profit. As the plantocracy purchased more breeding women and children in order to save their economic interests, traders modified their ideas of profit and risk and ideas of child worth changed throughout the Atlantic World.

Vasconcellos, Colleen A. “‘To Fit You All for Freedom:’ Jamaican Planters, Afro-Jamaican Mothers, and the Struggle to Control Afro-Jamaican Children during Apprenticeship, 1833-1840.” Citizenship Studies 10 (2006): 55-75.