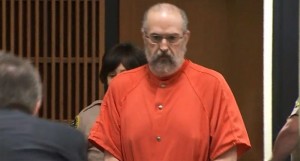 It really is beginning to seem like some church communities are full of child molesters. Then again, those of us not brainwashed by propaganda already knew that. Here’s another case of two children’s lives being ruined by a devout ‘Christian’ in a position of authority.

Douglas J. Allison is the 55-year-old principal at a small Christian school that is an arm of the Seventh Day Adventist Church in Port Angeles, Washington. He is one of two teachers, as well as the principal of Mountain View Christian School. Detectives heard the creepy old man confess to raping one of  his young victims — the girls were ten and eleven, respectively — on a taped conversation. He also never tried to say he was not guilty of what he was being accused of when officers arrived at his house to take him away for his horrific crimes. In fact, this monster confessed to raping those little girls again – to the arresting authorities.

Allison is in jail on $100,000 bail, and hopefully no one pays it. He is charged with eight counts of molestation and four counts of child rape. Detectives are also working with authorities in California, as Douglas worked in a school there as well. There are likely more victims of his horrible and gross behavior.

“We are very, very sad. Our congregation is grieving. We love our kids, we love our families. We’re praying for complete healing, for complete justice.”

The thing is, though, this sort of thing is all too common in religious communities. Some Christian cultures teach complete submission, and those in positions of authority, and often the churches are more concerned about their images and their collection plates than they are about the victims. It’s disgusting and despicable, but true. That is why sexual predators are allowed to run rampant in those communities.

Hopefully, these repeated cases of this sort of thing wakes people up, and they stop submitting to these creepy preachers and letting them abuse kids and others.