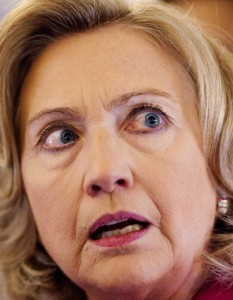 Senator Sanders demanded an apology Friday from Secretary Clinton after she attacked an activist who pointed out her palms being greased by the fossil fuel industry and asked if she would commit to discontinuing her relationship.

Clinton told the person that she has become “sick of the Sanders campaign attacking me” as she pointed her finger.

Sanders did not send this person to the small Clinton rally in question, but he didn’t back away from the same claim he has been making for some time – that Clinton is in the pockets of too many millionaires and billionaires on the issues that matter.

The Sanders campaign once again released proof of donations Clinton has received from those in the fossil fuel industry and demanded an apology from Clinton for calling him a liar.

That was a very, very bad idea.  Sanders supporters on social media immediately seized upon the attempt, and the hashtag has instead backfired against Clinton and turned into those listing numerous reasons for what deserves an apology from Clinton.