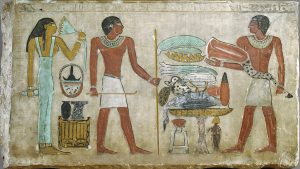 Examining  the roles and duties of the court, temple and provincial officials as the backbone of ancient Egyptian administration.

The administration of towns and cities in dynastic Egypt was part of a complex pattern of central and regional government whose functions, and officials, often overlapped. The three most important institutions involved in this process were the state/crown administration (broadly the same thing), provincial administration and temple administration. It is not really possible to provide a clear division of responsibilities for these three administrative systems, not least because of their relative shifts during the dynastic period, most dramatically during the First and Third Intermediate Periods when, at times of no central state/royal administration, regional and temple functionaries effectively took control of their localities throughout Egypt. It is worth noting, too, that other institutions were also administratively and economically significant at different periods, especially the military, not least in their administration of fortress-towns. It will, however, be useful to sketch out here the roles and duties of the court, temple and provincial officials as the backbone of the Egyptian administration.

The main source of power was the king, and the most powerful officials were those attached to the royal administration. The physical location of that administration is less easy to identify, not least because of the rather mobile nature of the court (as expressed in the person of the king and his retinue), especially after the Old Kingdom. The royal residence (ẖnw) may have been a more static feature in the Old Kingdom, but it is unclear whether this was one residence (at Memphis) or several (associated with each king’s Memphite pyramid complex?).

Early in the Middle Kingdom, the establishment of a royal residence at Itj-tawy near Lisht by Amenemhat I seems to have led to a doubling of some royal officials: those who were ‘following the king’ and those who were ‘in the palace’. In the New Kingdom, the royal administration was split into two complementary bureaucracies, each under a vizier, one for Upper Egypt (based at Thebes) and one for Lower Egypt (based at Memphis or Pr-Ramesses). But although these nominal ‘capitals’ existed, the official duties of the royal administration were invested in the officials themselves, who travelled between cities, independently of the king or in his retinue.

The gods of Egypt were wealthy, some extraordinarily so, partly as a result of donations of land and other assets. The officials in charge of these assets thus wielded considerable economic power. However, the division between divine and secular income was not always a clear one, with provincial governors also often acting as controllers of provincial temples, institutions that were major local landowners in their own right. At the level of the state, the huge donations to major temples made by the king, partly as a result of Egypt’s imperial conquests during the New Kingdom, created important economic institutions, with vast landholdings throughout Egypt, which could nonetheless be used by the state if needed. It is no coincidence that a major institution such as the Ramesseum at Thebes had a huge series of storerooms – principally granaries – safe within its enclosure walls. Together, the granaries of the Domain of Amun at Thebes have been referred to as New Kingdom Egypt’s ‘national bank’, the control of which gave massive resources to anyone who held it.

The most significant unit for provincial administration throughout the dynastic period was the nome. The modern word ‘nome’ derives from the Greek nomos, although the ancient Egyptian term was sp3t (sepat). The Egyptian writing of sp3twas usually in the form of a hieroglyphic symbol

which used to be regarded by Egyptologists as a plot of land criss-crossed by irrigation channels, although many scholars now believe it to be an area of land subdivided into individual plots. Whatever the derivation of the sign, the sp3t/nome was a remarkably resilient geographical unit, comprising a regional administrative area, somewhat similar to (although usually rather smaller in area than) an English county or a French département.

The exact number of nomes was subject to some variation over 3,000 years, partly when marginal land (including the Mediterranean shoreline) was made productive and therefore capable of being considered part of the ‘real’ Egypt, but also because of boundary changes, not least in the Delta where Nile branches often formed nome boundaries and these would inevitably change as those branches altered their courses. However, there was no significant overhaul of the system, which seems to have been in place by the 3rd Dynasty and continued with remarkable consistency (especially in Upper Egypt) until the Graeco-Roman Period.

Upper Egypt was divided into 22 nomes and these were broadly established by the end of the Old Kingdom. Lower Egypt had 20 nomes, though because of the dynamic geography of the Delta mentioned above, this number was only fixed in the Graeco-Roman Period. 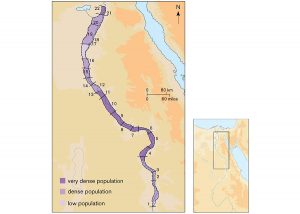 Map showing the location of nomes in Upper Egypt. Also shows a tentative population density of this part of Egypt. Steven Snape.

The origin of individual nome divisions is not clear. Some may have been influenced by the zones of control of Predynastic proto-kingdoms; some had an obvious geographical unity to them. Most consisted of seemingly arbitrary units of roughly equal size along the Nile Valley (where division along the linear river was usually fairly easy) and in the Nile Delta (which was somewhat more problematic, given the shifting Nile branches and fluctuating Mediterranean coastline). It has been suggested that differences in territorial size between nomes (e.g. the southernmost nomes of Upper Egypt have a significantly greater area than those a little further north around the Qena bend) may be to do with the agricultural potential of individual nomes and the desire on the part of the state to create nomes that had a roughly equal productive capacity (and therefore roughly equal levels of tax revenues to the state).

By the later part of the Old Kingdom, our understanding of the organization of provincial administration is clearer. The ideal situation seems to have been that each nome would be overseen by its own ‘Great Overlord’ (ḥry-tp ‘3, hery-tep aa), sometimes referred to in modern literature as a nomarch. These local leaders seem to have commonly held two offices: that of ‘Great Overlord of the Nome’ plus ‘Overseer of Priests’ (ỉmỉ-r ḥmw-nṯr, imi-r hemu-netjer) of the patron deity of the most important town of the nome; this latter role would give the nomarch control over the income from land owned by the temple. This dual role is often expressed in titles of the Old and Middle Kingdoms, as in the cemetery of Meir where a nomarch could be referred to as ‘Overseer of Priests of Hathor, lady of [the town of] Kis, Great Overlord of Nedjfet Pehtet [the 14th Upper Egyptian Nome]’. The combining of offices in this way, which gave provincial administrators access to temple property, could be a problem, however, especially if there was a local dynastic succession among nomarchs, and for this reason we see a series of royal decrees (most famously from Coptos) protecting temple property from local interference.

During the Middle Kingdom, the title ḥ3ty-‘ (haty-a) is more commonly used for the main official of a nome. This has a variety of possible translations, from ‘hereditary prince’ to ‘mayor’. The latter translation suggests that, when compared with the Old Kingdom, towns or ‘city districts’ were more important in the Middle Kingdom and later. This is probably true to some extent, and there is more evidence for each nome having a central-place urban centre for the administration of the nome, elite residences and specialist economic functions. However, it would probably be a mistake to over-emphasize the size and importance of these towns (especially before the New Kingdom) since provincial Egypt was essentially rural and the typical experience for most Egyptians would have been the small/medium-sized village rather than the large town.

As far as the state was concerned, the role of the nome (and its leaders) was to provide revenue for the state. This was most obviously expressed in the form of agricultural products, especially grain, although some nomes were responsible for other economically important activities depending on their location, such as provision of stone in the 15th Upper Egyptian nome, which contained the alabaster (travertine) quarries at Hatnub. The assessment of rent and taxation of crops from agricultural land was centrally organized and would most sensibly have taken place on an annual basis. The ‘time of the count of cattle and people’ was most often a biennial event (though not necessarily so), which allowed the assessment of the numbers of the most economically valuable movable assets of a nome. The cattle count was obviously a major event as it features on the walls of the tombs of many provincial officials.

The organization of corvée labour for state activities (such as pyramid building?) was another way in which the nome was expected to contribute to royal activity. State officials might be appointed to oversee the activities of nomarchs, but this was primarily to ensure that resources flowed smoothly from the regions to the centre; as far as local administration itself was concerned, the state was probably uninterested in how each nomarch ran his nome on a daily basis. 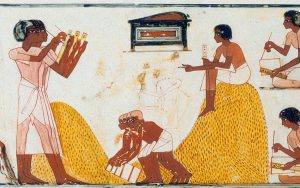 Scenes of harvest, especially the grain harvest, are frequently depicted on the walls of New Kingdom tombs. A ubiquitous accompaniment to that harvest is its recording and assessment for tax purposes by teams of inspectors. Zev Radovan/Alamy.

The physical location for administration at a national and local level is less easy to identify, and not only because of the poor archaeological survival of the most likely locations such as central Memphis. Even in relatively well-preserved administrative centres such as the royal city of Amarna or a well-populated regional centre (with royal connections) like Kahun, purpose-built administrative districts are not easy to find. Instead, the evidence from both locations suggests that the distinction between home and office was not an important one for relatively high-ranking Egyptian officials and that the ḫ3 (kha, ‘office, bureau’) often mentioned in administrative texts may refer to one of the public rooms in the large house of a well-to-do official.