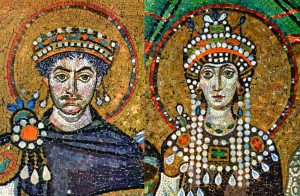 The reign of Justinian was an extremely significant period. It marked the final end of the Roman empire in the West the establishment of the new Byzantine empire in the East.

The empire was united under the Eastern emperor in theory, Justinian tried to make it so in fact. His armies invaded the Vandal, Ostrogothic, and Visigothic kingdoms in turn, and, in a series of bitter wars (540-554), reconquered much of the Mediterranean lands of the West. At the time, it seemed as if he had very little choice in the matter. In theory at least, the Germanic kings ruled as viceroys of the Eastern emperors. There was a difficult problem in that the Germans were Arians, practicing and preaching a form of Christianity considered heretical by the established Roman Church. The Vandals were the most zealous of the Arians and were quick to seize orthodox churches in order to convert them into Arian places of worship. The Vandals were so few in number that they resorted to terror in order to keep their subjects in order. The Vandalic kingdom became a police state in which orthodox Christians were striped of property, rights, and even freedom and life. When a delegation of orthodox Christians from Africa appealed to Justinian to fulfill his role as defender of the faith, he decided that the time had come to resolve the peculiar situation and bring the West back under real Roman control.

Map of the Mediterranean World in 530 CE

But the Westerners did not want a return of Roman taxation, Roman justice, and imperial interference in their affairs. Consequently, even the Roman inhabitants of some areas joined their German overlords in attempting to fight back the eastern armies determined to restore a situation that many people simply did not want to see restored. The Easterners did not want to waste money defending these western conquests and were impoverished by the cost of these wars. One should note, however that even when he was sending tribute in gold to the Persians and spending immense sums in the Gothic Wars, Justinian still had enough money to embark on an unprecedented building program. Justinian’s dreams of conquest have long ago been forgotten by most people. What he is remembered for it the magnificent Church of the Holy Wisdom (Hagia Sophia, mistakenly called St. Sophy) that still dominates the skyline of Istanbul, the former Constantinople, and his project of collecting and codifying the scattered laws, imperial edicts, decisions of the early Roman Senate, and opinions of learned jurists and organizing them into a written law code. Centuries later, this code, The Corpus Iuris Civilis was “rediscovered” in the West and sparked the growth of a legal profession that established the bases for many of the modern world’s systems of justice and law.

Map of the Mediterranean World in 565 CE

When Justinian died in 565 and new invaders entered the west, the eastern empire did very little to stop them. Neither westerners nor easterners had any further interest in restoring the empire.

Although committed to the idea of a Roman empire, Justinian recognized that his realms were basically Greek and that the imperial administration would be more effective, if the fact were recognized. Once the government stopped forcing the use of the Latin language and Roman institutions upon its people, the Eastern empire rapidly became more Eastern in its customs and outlook.

In the course of the sixth century, the other classical civilizations recovered from the barbarians the lands they had lost in the fifth. The Sui dynasty of China reunited North and South China by 589, the Persians recovered the Iranian plateau by 557; and by 606, Harsha has established a new Indian empire. Only in the Mediterranean did the wars of reconquest fail. Western Europe was the only part of a classical empire to fall permanently under barbarian control. The continuity of imperial institutions was broken only in Western Europe. It was the only area to begin an independent development.

Map of the Mediterranean World in 600 CE

During his Western wars, Justinian had bought peace with the Persians through regular payments of gold. This sort of policy is almost always a mistake, and Justinian’s adoption of it was a disaster. While the Byzantines poured out money, men and materiel in their Western wars, the Persians sat back and allowed Byzantine bullion to swell their treasury. The Eastern empire was steadily drained of coinage and its economy began to falter. The government had to become more and more aggressive in collecting taxes from a economically exhausted people, and the oppressed taxpayers – who saw no benefits coming from the emperor’s Western conquests – became deeply resentful. The Persians recognized that the Eastern empire had been badly weakened by the Gothic Wars, and attacked the empire soon after Justinian’s death in 565, before the empire had had a chance to recover from its exertions. The Persians managed to devastate and/or occupy much of the Byzantine empire until the emperor Heraclius turned the tide of battle against them. In a brilliant action, he took what troops he could gather and, leaving the Persians besieging Constantinople, he went by sea to Syria and marched overland to capture the virtually undefended Persian capitals of Persepolis and Ctesiphon. By 632, the Byzantines were triumphant, but both the Persian and Byzantine peoples and economies were exhausted and were quite unready to fight the confident and dedicated Muslim armies who soon appeared on their frontiers.

Heraclius’ subjects had been oppressed by both religious and political regimentation as well as a ruinous burden of taxes. Many welcomed the tolerant Muslims, with their light taxes, as liberators and quickly converted to Islam.

Justinian’s reconquests in the west were not permanent, but his destruction or weakening of the most sophisticated and highly-romanized of the Germanic invaders was. The Ostrogothic and Vandal states were eliminated and the power of the Visigothic kingdom greatly diminished. The only culturally advanced German tribe left untouched were the Burgundians, and they were too few in number to exercise any real power.

Justinian’s abortive “Reconquest” had left the Franks as the most powerful force in the West. This left the direction of Western affairs in the hands of those people least able to maintain Roman traditions. Only the Frankish alliance with the Church of Rome preserved some measure of continuity with Europe’s classical past.

We often view history as a series of “achievements,” and think that great men and women control the course of events. In the case of Justinian, the view may be partly true. The results of his decisions were crucial in the development of Western Europe. One might well argue that the Middle Ages would never have happened had it not been for Justinian. But it was not because of his “achievements,” but because of his failures that history turned out the way that it did. His ill- conceived western venture led to a clear split between the Westerners and the Eastern Romans; his abandonment of the Latin language as the language of government and administrations made that division permanent, and so he failed to reunite the Roman empire as the leaders of the other classical civilizations had done for their empires. He weakened the Eastern empire and strengthened the Persians, setting a stage for a devastating war that weakened the Eastern empire to such an extent that it could not effectively resist the spread of Islam. Finally, he overthrew those Western Germanic governments that were committed to attempting to preserve as much of the Roman imperial civilization as possible. And this led, indirectly, to the rise of the medieval Church.