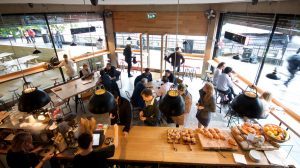 Creating a buzz. / Photo by davidabrahamovitch/Flickr

In any trendy coffee shop on the urban high street, you’re likely to see intimate groups of well-dressed (or fashionably scruffy) sophisticates. Perched on narrow wooden benches, they’ll be locked in conversation or poring over their MacBooks. As you breathe in the scent of single origin coffee beans, you may well detect a whiff of unapologetic pretension. But don’t scoff at the hipsters; they’re maintaining a well-established English tradition. Exposed light bulbs aside, this scene could have come straight out of the 18th century.

In her light-hearted re-telling of English history, Life Among the English (1942), Rose Macaulay gently lampoons the 18th-century coffee house, writing that “Young law students would arrive at their coffee house, newspapers in hand, and saunter away their time, admiring one another’s get-ups”. Unlike most of the text’s comedy – which is derived from the ludicrously unfamiliar practices of the past – the account of the coffee house gets a laugh because it is still so recognisable.

Representations of the coffee house throughout the ages are remarkably consistent. Even today, coffee is connected with fashionable sophistication. As a cultural icon, the coffee house stands alone in a broadly-imagined hinterland, somewhere between the stuffy cloisters and libraries of the university academy and the hipster corners of London’s Shoreditch, Manchester’s Northern Quarter and certain stretches of Sheffield’s Division Street. 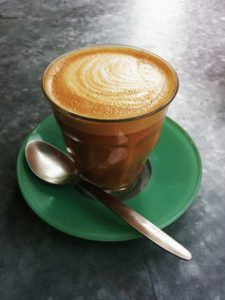 The contemporary coffee shop yearns nostalgically – almost subconsciously – for the coffee culture of a bygone era. It aspires to a representation of the coffee house galvanised during the 18th century; a romantic perception nurtured by the writing of figures like Joseph Addison and Richard Steele.

It is in literary works such as these that the most enduring descriptions of 18th-century coffee house culture survive. At the dawn of the 1700s, London was becoming Britain’s first 24-hour consumer society. This was a period that welcomed coffee, tea, porcelain, sugar, chocolate, dictionaries, novels and newspapers. It became the fashion to drop into club-like coffee houses, where people could discuss politics, literature, culture and their own lives. Thanks to technological advances and lapses in licensing rules, news and gossip now permeated the printed world.

It was into this society that Joseph Addison and Richard Steele released a periodical titled The Spectator in 1711 (no relation to the magazine of the same name). This paper’s manifesto was to fill these coffee houses with knowledge, culture, ideas and – above all – conversation. The paper’s fictional editor modestly claimed: “I shall be ambitious to have it said of me, that I have brought Philosophy out of closets and libraries, schools and colleges, to dwell in clubs and assemblies, at tea-tables and in coffee-houses”. 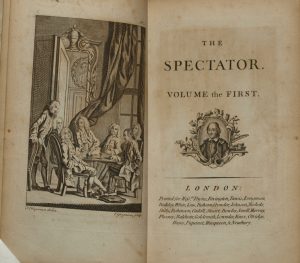 But this image of the coffee house as a public sphere of enlightened debate and discussion is – as Macaulay points out – undermined by the fact that these coffee houses were commercial enterprises that preyed upon the pretentious, extorting money from lazy posers in exchange for a den where they could imagine themselves to be great thinkers, philosophers and politicians.

A culture of commerce

In the 18th century, the coffee house was satirised for this very reason. Memorably, when the heroine of Alexander Pope’s mock-epic The Rape of the Lock (1712) arrives in a London coffee house, her commodity of choice is introduced as: “Coffee, (which makes the politician wise/And see thro’ all things with half shut eyes).”

By the early 20th century, the coffee house of The Spectator was seen as a kind of half-waking dream, which alluded the clinical scrutiny of the biographer or historian. As Virgina Woolf describes in her 1928 novel Orlando:

To give a truthful account of London society at that or indeed any other time, is beyond the powers of the biographer or the historian. Only those who have little need of truth, and no respect for it – the poets and the novelists – can be trusted to do it, for this is one of those cases where truth does not exist. Nothing exists. The whole thing is a miasma – a mirage.

Nevertheless, the dream was a popular and lucrative one. The coffee house that Addison and Steele inhabited might not have been quite the enlightened hub of culture that they reported. But in penning this imagined coffee house, they created a legacy that still survives today.

What these coffee shops also did – and what they continue to do – is provide a space. The coffee house remains a place for people to meet and converse, and that alone is worth celebrating. Even Woolf’s Orlando – unsettled by the disconnect between her idea of the coffee house and the commercial reality – acknowledged that the contradictions of coffee house culture do not diminish its splendour: “At one and the same time, therefore, society is the most powerful concoction in the world and society has no existence whatsoever”.