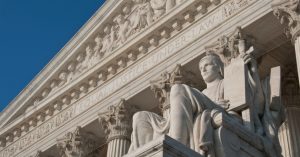 The Supreme Court ruled 5-3 that evidence collected during an illegal stop can be used in court if the search was conducted after the discovery of an arrest warrant. (Photo: Mark Fischer/flickr/cc)

“This case tells everyone…that your body is subject to invasion while courts excuse the violation of your rights,” Justice Sonia Sotomayor wrote in the dissent

The U.S. Supreme Court on Monday ruled that evidence recovered during illegal stops may still be used in court, if police officers conducted their searches after learning that a defendant had an outstanding arrest warrant.

In a 5-3 ruling (pdf), the Supreme Court said such searches do not violate the Fourth Amendment, which protects against “unreasonable searches and seizures.” Justice Sonia Sotomayor, who dissented, slammed the decision, writing in a sharp rebuke that the case “tells everyone, white and black, guilty and innocent…that your body is subject to invasion while courts excuse the violation of your rights.”

The case is Utah v. Strieff, in which defendant Edward Strieff was stopped by a police officer on grounds that were later ruled to be inadequate; during the stop, the officer discovered Strieff had an outstanding warrant for a traffic violation and conducted a search—discovering methamphetamines and drug pipe. A district court later ruled that although Utah Detective Douglas Fackrell did not have the right to stop Strieff, the evidence collected during the search could be used in a trial.

In her dissent, Sotomayor wrote, “Most striking about the Court’s opinion is its insistence that the event here was ‘isolated,’ with ‘no indication that this unlawful stop was part of any systemic or recurrent police misconduct.'” But in fact, she continued, “nothing about this case is isolated.”

Citing Michelle Alexander’s The New Jim Crow and Ta-Nehisi Coates’ Between the World and Me, among others, Sotomayor wrote:

For generations, black and brown parents have given their children “the talk”—instructing them never to run down the street; always keep your hands where they can be seen; do not even think of talking back to a stranger—all out of fear of how an officer with a gun will react to them.

By legitimizing the conduct that produces this double consciousness, this case tells everyone, white and black, guilty and innocent, that an officer can verify your legal status at any time. It says that your body is subject to an invasion while courts excuse the violation of your rights. It implies that you are not a citizen of a democracy but the subject of a carceral state, just waiting to be cataloged. We must not pretend that the countless people who are targeted by police are “isolated.” They are the canaries in the coal mine whose deaths, civil and literal, warn us that no one can breathe in this atmosphere. They are the ones who recognize that unlawful police stops corrode all our civil liberties and threaten all our lives. Until their voices matter too, our justice system will continue to be anything but.

Sotomayor also noted that 76 percent of the population of Ferguson, Missouri—which has been under a national spotlight since the 2014 police killing of unarmed black teen Michael Brown—has outstanding warrants against them. The unconstitutional policies endemic within the city’s justice system have been widely reported.

“This case allows the police to stop you on the street, demand your identification, and check it for outstanding traffic warrants—even if you are doing nothing wrong,” she wrote.

The ACLU said on Twitter that it was “deeply disappointed” by the ruling, warning that the decision would have “terrible repercussions, [especially] for people of color.” The organization also praised Sotomayor’s “much needed” dissent for highlighting the racial impact of the decision.

The Ruling in Utah v. Strieff Follows in PDF: