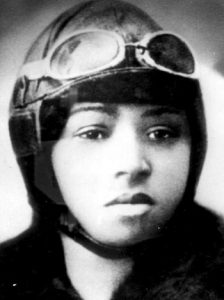 Bessie Coleman (1892-1926) was the first African-American woman to become a licensed airplane pilot. She persevered through discrimination and danger in order to fly in the early days of aviation. Like many aviators of the early 20th century, she made her living as a barnstormer, similar to today’s stunt pilots. People lined up to see “Queen Bess” or “Brave Bessie” in action.

Bessie was born in rural North Texas as the tenth child of thirteen on January 26, 1892. She grew up in Waxahachie, south of Dallas. Her father was a tenant farmer, but the entire family worked in the fields when it was time to harvest cotton. Schools were segregated, and the African American school closed during harvest time.

School was one of Bessie’s favorite places. Even after her father and older brothers left, leaving Bessie’s mother to support the family as a cook and housekeeper and Bessie to care for her three younger sisters, Bessie found a way to walk to the one-room school house four miles away. When she couldn’t go to school, she borrowed books from the traveling wagon library.

When Bessie became a teenager, she added work as a laundress to her busy schedule. But the money she earned paid for a semester at Langston University in Oklahoma. Bessie had to drop out after that. The cost of college was too great. But she knew that there was more to life than segregated Texas.

Bessie moved to Chicago, working as manicurist. Two of her brothers lived in the city. Both had fought in World War I and told stories of airplanes and the French women who could be pilots.

Robert Abbott, founder and editor of the weekly African American newspaper The Chicago Defender, told Bessie that France was more open about race and gender. She saved every penny from working as a manicurist and operating a chili parlor. In her free time, she learned the French language.

In late 1920, Bessie sailed to France to study at the Caudron Brothers’ School of Aviation in Le Crotoy, France. She was the only female and person of color in her class. Bessie walked to the airfield, nine miles away, to make her meager funds last. She finished the 10-month course in seven months.

On June 15, 1921, Bessie took the test for her pilot’s license and passed. She received her license from the Fédération Aéronautique Internationale. 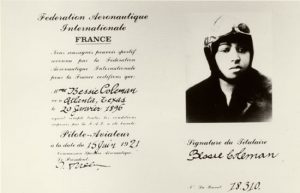 Bessie taught herself French in order to get her license from the Fédération Aéronautique Internationale.

When Bessie arrived in New York, she was greeted by large groups of people. Only a handful of women were pilots in the U.S., and nine were African American. She was already a hero.

In the challenges she faced to become a licensed pilot, Bessie recognized another dream. She wanted to open an aviation school for African Americans. In the early days of aviation, the only way to earn money was to give rides or entertain people with aerobatic flying. She returned to Europe for six months of advanced aviation training.

Bessie returned to the U.S. and adopted a military-looking uniform designed to make the diminutive woman look important. She debuted on September 3, 1922 at New York’s Curtiss Air Field (7 years later, this would be the location where the Ninety-Nines International Organization of Women Pilots would be founded). Bessie performed figure eights, loop-the-loops, barrel rolls, and other barnstorming stunts guaranteed to draw gasps from the crowds. She became “Queen Bess, Daredevil Aviatrix.”

Word of “Queen Bess” spread, and she drew huge crowds of black and white audiences wherever she went. At first, she concentrated on air shows in the North, but within a few years, the demand of her performances reached the South. When Bessie debuted in her home state of Texas in 1925, she refused to perform at venues with segregated gates.

Flying is an expensive vocation. Bessie had plane repairs, doctor bills from a bad crash, and even had to buy a new airplane. Saving for a flight school was difficult. She began supplementing her income with lectures, parachute jumping, and wing walking.

On April 30, 1926, Bessie was preparing for an airshow in Jacksonville, Florida. She went up as a passenger in her airplane. Her mechanic took the controls while Bessie scouted good locations for parachute jumps the next day. 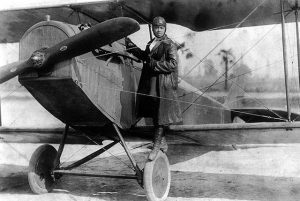 Observers reported that the plane went into a dive, then flipped. Bessie was thrown from the plane, dying instantly. The plane crashed to the ground, killing the mechanic. It was later determined that a loose wrench had become jammed into the controls.

For many years, the Challenger Pilots’ Association of Chicago and later the Tuskegee Airman did a flyover of Lincoln Cemetery on Bessie’s birthday to honor the amazing aviator. 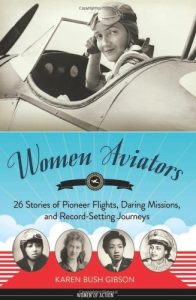