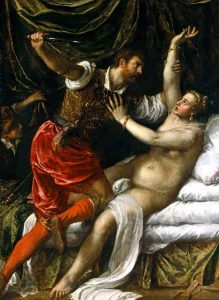 The Rape of Lucretia by Titian (1490-1576 CE). Lucretia was raped by Sextus, son of the Roman king Lucius Tarquinius Superbus. The incident, according to legend, brought about the downfall of the monarchy and the beginning of the Roman republic in 509 BCE. / Public Domain, Wikimedia Commons

The corruption of Superbus and the rape of Lucretia by his son, Sextus, ended their rule and ushered in the Republic.

Lucius Tarquinius Superbus (‘Tarquin the Proud’) was traditionally the seventh and last king of ancient Rome before it became a republic. He belonged to the Etruscan Tarquinii clan, reigned from 534 to 510 BCE, and was infamous for his tyrannical rule, although Rome did enlarge its territory in that time. Following his exile after the infamous rape of Lucretia by his son Sextus, he joined forces with the Etruscan king Lars Porsenna who besieged Rome c. 508 BCE. Porsenna did not restore Tarquinius to the throne, though, and the ex-king fled to Cumae where he died in 495 BCE.

As with much of Rome’s early history, where legend replaces actual facts, the chronology and events of Lucius Tarquinius’ life are often confused and irreconcilable. Some ancient sources have Lucius Tarquinius the son of Lucius Tarquinius Priscus, the fifth king of Rome (r. 616 – 579 BCE) who was originally from the Etruscan city of Tarquinia, some 90 km north of Rome. However, these dates do not match, and so they are either wrong or Lucius Tarquinius Superbus was the grandson of Priscus.

Lucius Tarquinius Superbus’ wife was Tullia, the younger daughter of Servius Tullius, Rome’s 6th king. Together they arranged, first to kill Tullia’s husband, Arruns Tarquinius, and then murder the king, allowing Lucius Tarquinius to seize the throne. Shockingly, Tullia was said to have run over her father’s corpse in her chariot splattering blood all over her clothes (even a woman riding a chariot was unthinkable to the Romans, nevermind the lack of family respect). Again according to the Roman historian Livy, the new king swiftly removed all dissenting senators and established himself as the dictator of Rome, modelling his reign on the Greek tyrants of that period. Such colourful descriptions by a Roman author writing five centuries after the events are likely tinged with a bias eager to display the difference between virtuous republic-loving Romans and dastardly foreign kings from immoral Etruria.

The Reign of Tarquinius 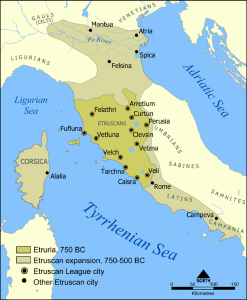 A map showing the extent of Etruria and the Etruscan civilization. The map includes the 12 cities of the Etruscan League and notable cities founded by the Etruscans. / Image by Norman Einstein, Wikimedia Commons

Lucius Tarquinius’ early reign saw the king embark on a campaign of ambitious expansion, waging war against the Etruscans, Volci, and Latins. He firmly established Rome at the head of the Latin League, now a more military-oriented association, and conquered several Latin towns. Warfare was coupled with diplomacy, and treaties and alliances were made with Latin towns, notably with Tusculum, whose ruler Octavius Mamilius married Lucius Tarquinius’ daughter. In 510 or 509 BCE, Rome’s status as an important power was confirmed with the signing of its first treaty with Carthage. Another achievement was to complete construction of the massive Temple of Capitoline Jupiter in Rome, a project begun by Tarquinius Priscus and finished by Etruscan sculptors imported especially for the job. Lucius Tarquinius also added seats to the Circus Maximus and extended the Cloaca Maxima drainage system, although his use of forced labour from the plebs aroused wide discontent amongst the populace.

Rape of Lucretia and Exile 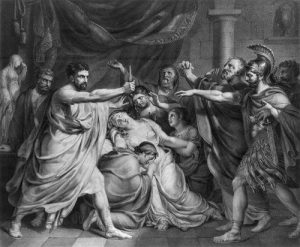 The end of Lucius Tarquinius’ reign, the Tarquinian clan in Rome, and the monarchy of early Rome itself, all came to an end in the final decade of the 6th century BCE. As with every other part of the king’s life, the legend of his downfall has been confused and manipulated over time and by later Roman writers in order to paint an idealised and symbolic transition from monarchy to republic. The spark that set ablaze the ruins of Lucius Tarquinius’ reign was the rape of Lucretia. Lucretia was the wife of Lucius Tarquinius Collatinus, great nephew of Tarquinius Priscus, and she was raped at knifepoint by Sextus, the son of Lucius Tarquinius Superbus. Following her perceived dishonour of this attack, she committed suicide and thus became forever after a symbol of Roman matronly chastity. Lucius Iunius Brutus (who on the spot swore an oath of revenge for Lucretia) and Lucius Tarquinius Collatinus used the tragedy as a catalyst for ridding Rome of their tyrannical king, at that time laying siege to Ardea, and thus set themselves up as Rome’s first consuls in 509 BCE. Once again, the legend conveniently portrays the Etruscans as lacking any class and the Romans as saviours of virtue, but, in all probability, the whole story covers a more mundane dynastic struggle for power between the royal household and the upper aristocracy which were both, perhaps uncomfortably so for later Roman writers, largely of Etruscan origin.

Brutus soon went one step further and seized the opportunity to do away with the whole Tarquinian clan, including Collatinus (this version rather glosses over the fact that Brutus was himself the nephew of Tarquinius Superbus). This he achieved with the backing of the Roman people. These legendary events were further embellished with Brutus killing two of Collatinus’ sons when they tried to restore their father, additions made for political expediency following the assassination of Julius Caesar by the descendant of Brutus, Marcus Iunius Brutus in the 1st century BCE and made to show that Brutus and the Iunii Bruti were not blameless defenders of Republican ideals. Returning to our story, Rome was now indeed a republic, but Lucius Tarquinius Superbus would not give up his throne so easily.

Following his exile from Rome, Lucius Tarquinius joined forces with the Etruscan cities of Cerveteri, Tarquinia, and Veii. A force attacked Rome but was defeated at the battle of Silva Arsia. Undeterred, Lucius Tarquinius then convinced the king of Chiusi, Lars Porsenna, to lay siege to Rome c. 508 BCE. Traditionally, this second attack was seen as an attempt to restore Rome’s monarchy and Lucius Tarquinius to the throne, but following Porsenna’s siege of the city, he instead did one of two things. Version one has Porsenna finally withdrawing after being impressed with the city’s fortitude and moving off to attack the Latin town of Aricia instead, albeit without success. Version two of the story, the more credible one, has Porsenna victorious and Rome surrendering to the Etruscan king, who then, far from reinstalling Superbus, acted to abolish the monarchy of Rome and then used the city as a base to attack the Latin cities starting with Aricia in 504 BCE.

Superbus would indeed turn out to be Rome’s last king, and the Republic set off on its road to greatness. Meanwhile, the ex-king was forced to seek refuge with his son-in-law Octavius Mamilius, the dictator of the Latins (according to one version of the legend), who sought, rather improbably given the longtime rivalry between Rome and the Latin cities, to restore Lucius Tarquinius to the throne. Following Mamilius’ defeat at the Battle of Lake Regillus (499 or 496 BCE) to the Romans aided by Castor and Pollux, Lucius Tarquinius moved on to Cumae in Campania where he was hosted by the tyrant Aristodemus until his death in 495 BCE.