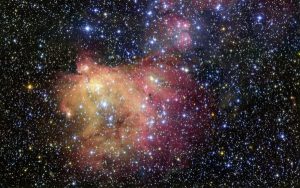 This image from ESO’s Very Large Telescope shows an emission nebula in the Large Magellanic Cloud known as LHA 120-N55.

This image from ESO’s Very Large Telescope shows an emission nebula in the Large Magellanic Cloud (LMC) known as LHA 120-N55. Light coming from the blazing blue stars appears to be energizing gas which is left over from the stars’ recent formation.

Often referred to as N55, this satellite galaxy of the Milky Way, is located about 163,000 light-years away, tucked inside a superbubble called LMC 4.

Superbubbles can often be hundreds of light-years across and are formed when the fierce winds from newly formed stars and shockwaves from supernova explosions work in tandem to blow away most of the gas and dust that originally surrounded them and create huge bubble-shaped cavities. The material that became N55, however, managed to survive as a small standalone nebula inside the superbubble.

A grouping of brilliant blue and white stars – known as LH 72 – also managed to form hundreds of millions of years after the events that originally blew up the superbubble. The LH 72 stars are only a few million years old, so they did not play a role in emptying the space around N55. The stars instead represent a second round of stellar birth in the region.

The beautiful colors surrounding the stars are believed to stem from the recent rise of a new population of stars. The intense light from the powerful, blue-white stars is stripping nearby hydrogen atoms in N55 of their electrons, causing the gas to glow in a characteristic pinkish color in visible light. Astronomers recognize this telltale signature of glowing hydrogen gas throughout galaxies as a hallmark of fresh star birth.

Things may seem peaceful here, but don’t let appearances fool you. In a few million years, some of the stars within the LH 72 association will go supernova, scattering N55’s contents. Basically, a bubble will be blown within the superbubble, and the cycle of starry beginnings and ends will carry on in this close neighbor of our home galaxy.